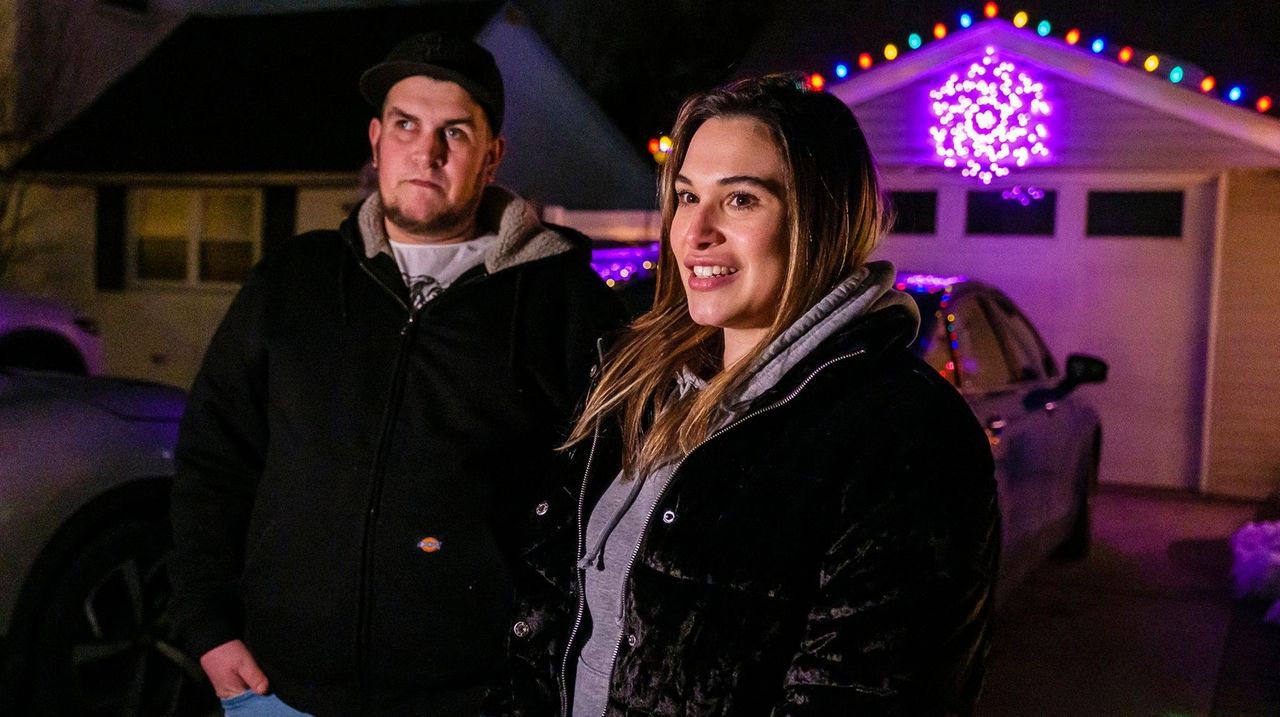 Sara Pascucci, of Bethpage, along with several of her neighbors, received an anonymous letter telling her to take down her Christmas lights, which she'd left up to honor her father and aunt, who recently died from COVID-19. On Sunday night, some of the Berkshire Road residents held a Christmas-themed car parade to stand in solidarity with their neighbors. Credit: Kendall Rodriguez; File footage

Santa came to town on Valentine’s Day in one Bethpage neighborhood this year as residents there turned on their holiday lights in honor of those who have died of COVID-19.

The effort and accompanying car parade was organized after Berkshire Road resident Sara Pascucci and several others received notes in their mailboxes earlier this month admonishing them for not taking down their holiday lights earlier.

The notes were particularly upsetting for Pascucci, 31, a receptionist at a Bellmore dermatologist, who lost two members of her family to the virus in January. She buried her father, Anthony Pascucci, 61, on Jan. 15, and her aunt, Connie Pascucci, 70, on Jan. 9 after both succumbed to the virus.

Her story went viral after Pascucci posted in the Long Island Moms Facebook group. In the post, Pascucci described how her father always loved decorating the family’s home for the holidays and how after his death taking down the lights was not a priority.

Among those who came to show support was a Copiague man who legally changed his name to Santa Claus in 2012 and dressed the part for the evening.

"They had a horrible year and for somebody to do that is just heartbreaking," Claus said. "I can’t stand by and just kick my feet up and drink hot chocolate at the North Pole when something like this is happening."

More than a dozen vehicles decorated in lights rolled down Berkshire Road Sunday evening as supporters, including Claus’ professional partner Mary Ellen Schnepf of West Islip as Mrs. Claus and someone dressed as The Grinch, gathered at the Pascucci’s home.

The home and about a half dozen others were illuminated with lights and decorations as a WALK 97.5 FM truck blasted Christmas tunes nearby.

About five residents on the street received the notes, said John Fazio, 49, who also received one, although the sender has yet to be publicly identified.

Fazio said he left his lights up, but did not turn them on before receiving the letter. On Sunday he relit his modest display to honor the elder Pascucci.

"It’s ridiculous that someone would find the time to be that mean," Fazio said. "I guess somebody had too much time on their hands."

Gasper Zizzo, 78, said he hung a single stand of colored lights around his front door in solidarity with the Pascuccis.

"I put these back up again to honor Tony [Pascucci]," Zizzo said. "He was a great guy and a wonderful neighbor."

One parade participant got out of his vehicle knelt down and screamed "I love you Mr. Pascucci" in front of the family’s home.

"It’s just heart warming," Sara Pascucci said. "Just to know our neighbors are here to give us support and love, it’s helping us get through a lot."

Claus noted that the event probably wouldn’t change any minds, but it would bring some cheer.

"I’m not expecting the Grinch to grow a heart three times his normal size and be converted," he said.