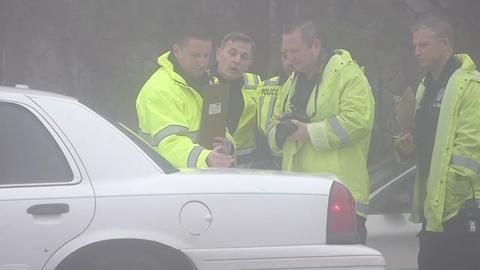 Suffolk County police said one person was killed in a two-car crash on the westbound Sunrise Highway in Yaphank on Wednesday, Dec. 23, 2015. The driver of the second vehicle involved was charged with driving while intoxicated, police said. (Credit: James Carbone)

A wrong-way drunken driver crashed head-on into another car on Sunrise Highway in Yaphank on Wednesday, killing the other driver, police said.

Christopher O’Brien, 54, of Port Jefferson Station, was driving an Audi A4 east in the westbound lanes about 5:30 a.m. when he struck a 2010 Toyota Corolla just east of Horseblock Road, Suffolk County police said.

The driver of the Corolla, who was traveling in the left lane, was pronounced dead at the scene, police said. Police identified him as Thomas D’Eletto, 57, of Aquebogue.

Police investigating the crash closed the westbound lanes of Sunrise Highway between Exit 58, the William Floyd Parkway, in Shirley, and Exit 57, Yaphank Avenue, in Yaphank, until about 11:40 a.m.

O’Brien, of 460 Old Town Rd., was arrested on charges of driving while intoxicated. He was admitted to Brookhaven Memorial Hospital Medical Center in East Patchogue to be treated for non-life-threatening injuries and will be arraigned at a later date, police said.

Anyone with information about the crash is urged to call the vehicular crime unit at 631-852-6555.

CORRECTION: The location of the accident was incorrect in an initial version of this story.