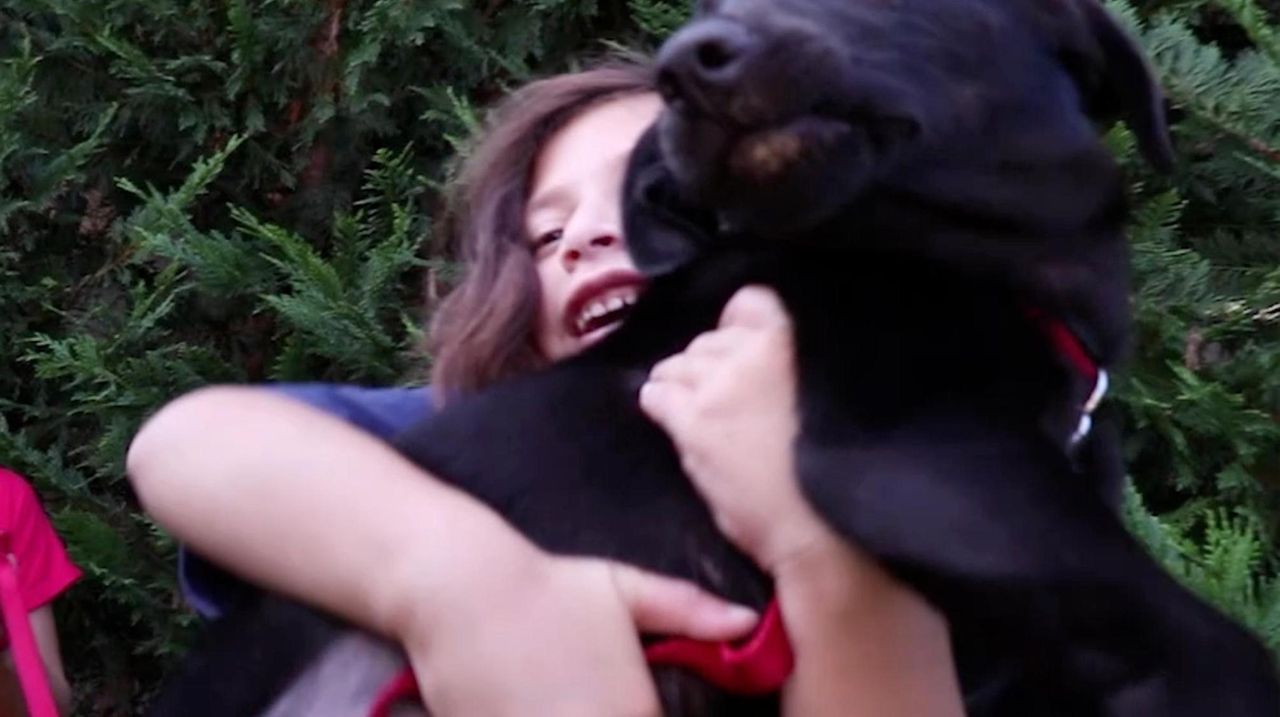 5-year-old Eva Raguso and her sister Mila, 7, were given a puppy named Calvin after veterans' group Paws of War surprised her family with the black lab at their home in Commack on Friday, Aug. 24, 2018. Credit: Jessica Rotkiewicz

Master Sgt. Christopher Raguso promised his two daughters he would get them a puppy when he returned from Iraq.

Raguso died in March before he could keep his promise, but a group of volunteers from Nesconset veterans group Paws of War picked up the task. On Friday morning, they surprised Eva, 5, and Mila, 7, at their Commack home with a 13-week-old black lab puppy named Calvin.

“This was a good thing for us. We needed something genuinely happy,” said their mother, Carmela Raguso, 36.

Calvin is part of a litter of 11 puppies rescued from a high-kill shelter in Louisiana by Long Island animal group Guardians of Rescue. Calvin and his siblings were brought to Long Island and are being trained and given out to veterans’ families, said Christopher McNamara, a neighbor and Paws of War volunteer who helped coordinate the surprise.

Eva, 5, has been having trouble sleeping. Her mom said this is the first time she’s seen her daughter genuinely happy in months. “I finally have a friend to sleep with me in my bed!” Eva said. Here’s the whole surprise: pic.twitter.com/T8pKFGRzB8

“Their reaction was phenomenal,” McNamara said. “I’m so happy for the family.”

The family didn't sleep well Thursday night — Raguso because of anticipation, but she said Mila and Eva have had trouble sleeping since their father, a National Guard airman and FDNY lieutenant, died in a helicopter crash in Iraq on March 15. Eva often refuses to sleep in her own room, choosing instead to sleep where her dad once did in her parents’ bed, Raguso said.

Christopher Raguso, who had previously been deployed to Iraq, Afghanistan, Somalia and disaster zones in Texas and the Caribbean, had been serving with the New York Air National Guard’s 106th Air Rescue Wing on what he said would be his final tour, family said at his funeral. Between assignments, Raguso, 39, had also served in the Commack Fire Department since 2000 and the FDNY since 2005. The FDNY honored him for bravery and lifesaving actions six times.

He was killed with six of his Air National Guard colleagues in the March 15 crash near the Syrian border. Thousands attended his funeral in Kings Park in March. Six months later, the streets of his neighborhood are still lined with American flags.

Carmela Raguso said McNamara approached her a few weeks ago to find out how he could help the family. He and Raguso decided there was no better choice than a puppy. She hoped a furry new family member would help bring her daughters together.

"That's my mom goal," she said. "Calvin could help them heal together."

To pull off the ruse, Raguso told her daughters a family friend was stopping by with his dog. Robert Misseri, founder of Paws of War, played along.

“Sorry, his dog got sick this morning and he wanted to keep him home,” Misseri told the girls as he drove up to their home. “But it just so happens that we have an extra dog in the truck.”

Of course, the volunteers told her. Eva shrieked with excitement, running around the yard with her new friend. They walked down the block and through the backyard, as Eva yelled, "This is my dream!"

Mila and Eva cuddled Calvin and fed him treats — part of a puppy starter kit the group gave the family.

Raguso watched her children and said she couldn't help thinking of her husband. He would have loved to see his daughters so happy, she said, and they had long talked about surprising the girls once the couple had picked out the right puppy.

She said she pictured her husband watching them, reminding the family to keep the backyard tidy and pick up after Calvin.

"A lot of the things we'd planned to do this summer, we did them anyway," she said. "We honor the dead by living and that's what we'll continue to do."