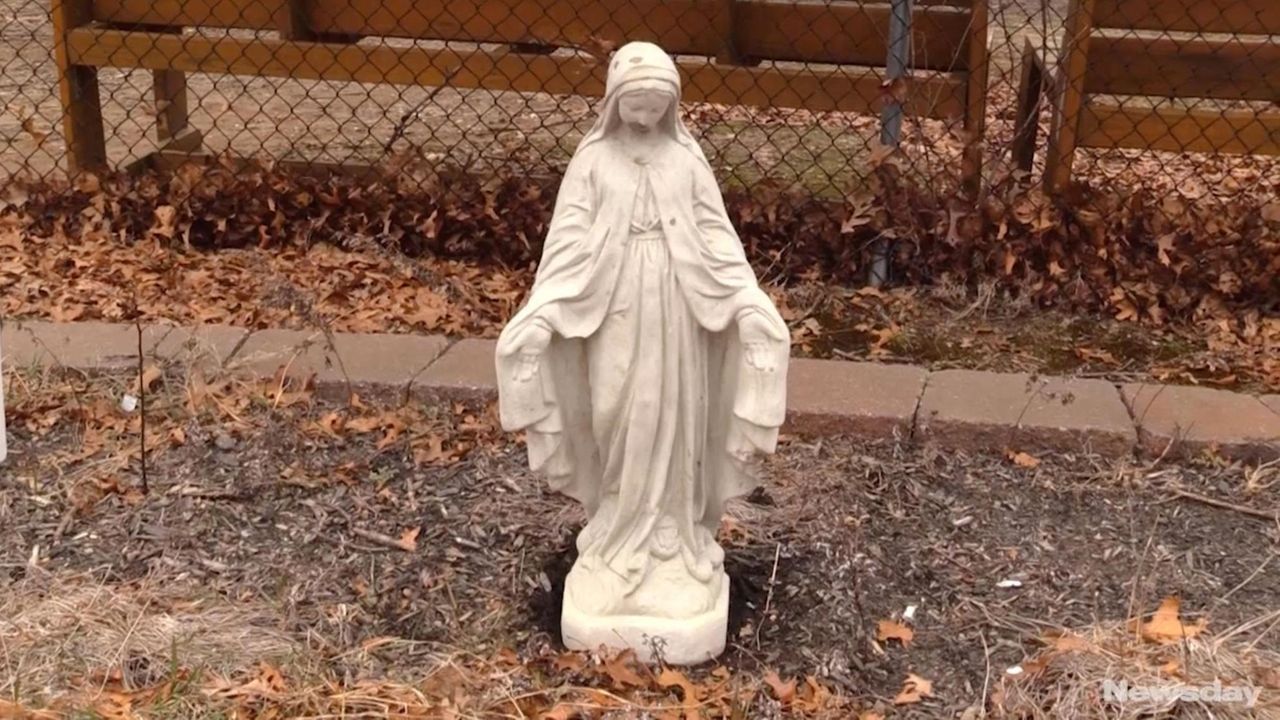 Less than a week after a Virgin Mary statue outside the Church of St. Gerard Majella in Port Jefferson Station was desecrated, a Riverhead businessman has stepped up to donate a brand-new one,  the Rev. Greg Rannazzisi, the church's pastor, said Tuesday, Credit: James Carbone

A “blessing” has come to the Church of St. Gerard Majella in Port Jefferson Station, its pastor says.

Less than a week after a Virgin Mary statue that stands outside the church was desecrated, a Riverhead businessman has stepped up to donate a brand-new one that’s exactly the same.

“Hope always wins, and love conquers all — that’s what the High Holy Days that are approaching are all about,” the Rev. Greg Rannazzisi said Tuesday, just hours before the new statue was to be put in place. “Whenever you see these tragedies you see a glimmer of hope that overtakes them.”

Authorities are still investigating the vandalism at the Port Jefferson Station church, along with the vandalism at the Shrine of Our Lady of the Island in Manorville on March 10 that left a life-size statue of Jesus with a smashed face. The Virgin Mary statue was damaged sometime between Friday and Sunday, police said.

Both instances are being investigated as hate crimes, police said.

Although the churches are not in the same area, detectives are investigating whether the acts of vandalism are related, a spokeswoman said Tuesday. There are no suspects in either case.

Rannazzisi said by lunchtime on Monday, a dark moment for the church showed signs of brightening.

“I had decided early on that a new statue would be put up in its place,” Rannazzisi said of the Virgin Mary statue. “I hadn’t figured out how to pay for it yet, but it wasn’t terribly expensive. They’re a few hundred dollars.”

Before Rannazzisi could figure out a plan, he got a call from William Darrow, owner of East End Statuary in Riverhead.

Darrow had seen a story about the vandalized Virgin Mary statue on television and recognized it as the same statue he sells at his store. He decided to help, he said.

“When I saw it on the news I said, well, we make the same exact one, so I figured there was no sense in the church having to pay for another one because vandals had wrecked their statue,” Darrow said.

Rannazzisi said the Virgin Mary statue, which had been at the church about 10 years, had been battered years ago and could no longer be repaired.

“Sadly, she had taken a beating more than once — the statue’s head would be broken off and there are just so many times that it can be glued back on,” said Rannazzisi, who began working at the church this month.

Darrow said the new statue stands 33 inches tall and is made of cement; he happened to have the same one as the original because most religious statues are made from molds.

The Rev. Roy Tvrdik of the Shrine of Our Lady of the Island said his church too has found that sometimes with the bad comes the good.

While the Shrine of Our Lady of the Island hasn’t gotten the gift of a statue to replace its damaged Jesus, more than $5,000 has been raised to purchase another one, thanks to donations from church members, callers to the church, and contributions made through an online fundraiser, Tvrdik said.

Replacing the Jesus statue would cost more than replacing the Virgin Mary statue, Tvrdik added, because their Jesus was not a mold and was larger, so it would cost between $8,000 and $10,000 to re-create.

While Tvrdik said he didn’t know if the two acts of vandalism were related, “it’s very sad that someone has such difficulty with the church, with God or with Jesus” that they would engage in such destruction, Tvrdik said.

“There has to be some upset in their life in some kind of way. We prayed for them at Mass today.”

Suffolk County Crime Stoppers is offering a reward of up to $5,000 for information leading to an arrest in the Port Jefferson Station case; a $5,000 cash reward is being offered in the Manorville vandalism.

Anyone with information on either case is asked to call Crime Stoppers at 800-220-8477.