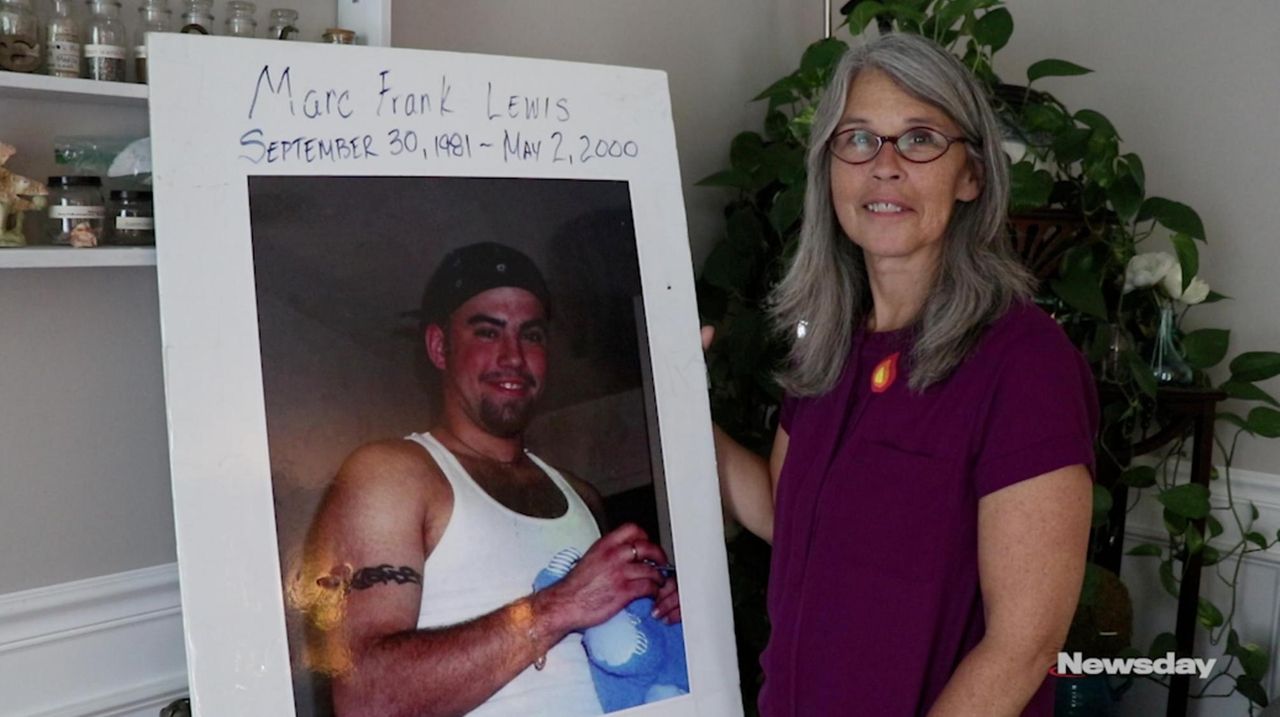 Claudia Capie Friszell with a portrait of her son, Marc Lewis, who died of a drug overdose 18 years ago.  Credit: Jessica Rotkiewicz

The library clerk spotted the signs as soon as the man walked in: the clammy face, the drowsy walk.

"How you doing?" asked Claudia Capie Friszell from behind the front desk. "You don't look so good."

The man, in his mid-30s, told her he was OK. The two had talked before, about the death of her son from a drug overdose, about him wanting to get into rehab.

She asked the security guard to keep an eye on him. About an hour later, the guard found the man passed out in the bathroom. He had OD'd. An ambulance came and took him away.

Friszell doesn't know what happened to the man. She hopes he got help.

"I never saw him again," said Friszell, describing what happened two years ago at the Comsewogue Library in Port Jefferson Station.

Libraries have become a place where the opioid crisis comes into the open. For drug users, a library is a quiet, safe place to sit for hours without being hassled.

Friszell knows all too well the toll that opioids can take. Her own son, her eldest, died in 2000 — not so long ago on a mother's timeline. Today, Marc Lewis would have celebrated his 37th birthday.

Since her son's death, Friszell has put her energy into helping those tangled up in the drug crisis. She started a family support group at Hope House Ministries in Port Jefferson, and she volunteers with a handful of other support groups. Hardly a night goes by when she's not headed to a support group, fundraiser or public meeting.

Father Francis Pizzarelli, who founded Hope House, knows Friszell well and how she can talk about tough issues.

"Anytime I bury someone because of an overdose, and I see the brokenness of the family, I send them to Claudia," Pizzarelli said. "I say, 'This is a womanwho you can cry with,  laugh with, and feel a bond with. Because she's walked in your shoes.' "

The library on Terryville Road is the perfect place for Friszell. Libraries have become so much more than a place to borrow books: find Medicaid forms, get help from a CPA at tax time, sign up for senior services, take the kids to story time.

Friszell is the first worker who visitors see when they walk into the library. Her talent for connecting with people goes way beyond what is in the job description, said library director Debra Engelhardt.

"Claudia excels in dealing with, well, the human experience, the range of it," Engelhardt said. "And she's not afraid to go there with someone."

Outside the library, Friszell is a bit of a local personality. For more than a decade, she has talked to the students at Comsewogue High School about her family's struggle with drugs. Last year, she helped push the Suffolk County Legislature to create an opioid task force. This year, county lawmakers named her a 2018 Suffolk County Woman of Distinction.

But Friszell's greatest strength, those who know her say, comes in private moments.

"Sometimes it comes down to life or death," Friszell said. "One person at a time, one family at a time. Sometimes you just look at someone and see they need a hug."

When Friszell put her son into rehab in 1998, he was going into his senior year at Comsewogue High.

He had been smoking pot since he was 14. His mom freaked. The parents of some of his friends thought she was overreacting.

By the time Marc went into rehab, he was using Vicodin and Valium.

"He was medicine cabinet shopping," Friszell said. "He would go into someone's home, go into the bathroom, and see what drugs he could find."

Caroline Sullivan remembers Marc — and Friszell — from when she was assistant director at the rehab center, Daytop Village in Huntington.

"She was like every other parent there," Sullivan said. "Shellshocked, angry, sad, lost … Asking, 'How do I fix my kid.' "

Marc graduated from Daytop nearly a year later, in mid-1999. Two weeks later, he took a mandatory drug test. He had Valium in his system.

Friszell and her husband, Marc's stepfather, told Marc that he had to go back into rehab and stay clean if he wanted to keep living at home with his three siblings.

Marc refused and went off to New Jersey to live with his dad, Friszell's first husband.

On the last weekend of April 2000, Marc came back to Long Island for a visit.

"We had a great weekend together," Friszell said. "Two days later the police were at my door."

Friszell cried every day for weeks. Then, she noticed she was being treated differently. She lost friends. Parents even pulled out of play dates with her two younger kids.

"People totally shunned me," she said.

Friszell tried to explain it all to her other kids — her two girls, 5 and 16, and her 3-year-old son. That didn't sit well with her husband, who didn't want the younger ones to know anything about the drugs. Eventually, the couple split.

Along the way, Friszell came to realize something about herself. She had always been community-minded, but now she wanted to talk publicly about the opioid epidemic. Outcast or not, she was going to speak out.

"She came to see herself as part of something bigger," said Sullivan, who has worked with addicts for three decades. "She took it on voraciously after he passed."

For many parents with addicted kids, Friszell has become their lifeline. She remembers one mother who called her, panicked. Her son was overdosing right there in her bathroom.

The mother's hands were shaking so badly that she broke the glass syringe used to squirt Narcan, the drug used to reverse overdoses, up his nose.

She called Friszell before she dialed 911.

Friszell pulled up just as the first responders lifted the young man, in his early 20s, into the ambulance.

"We went to the emergency room," she said. "He recovered."

In the three years since, Friszell has kept up with the family. The young man went into rehab. He has relapsed twice.