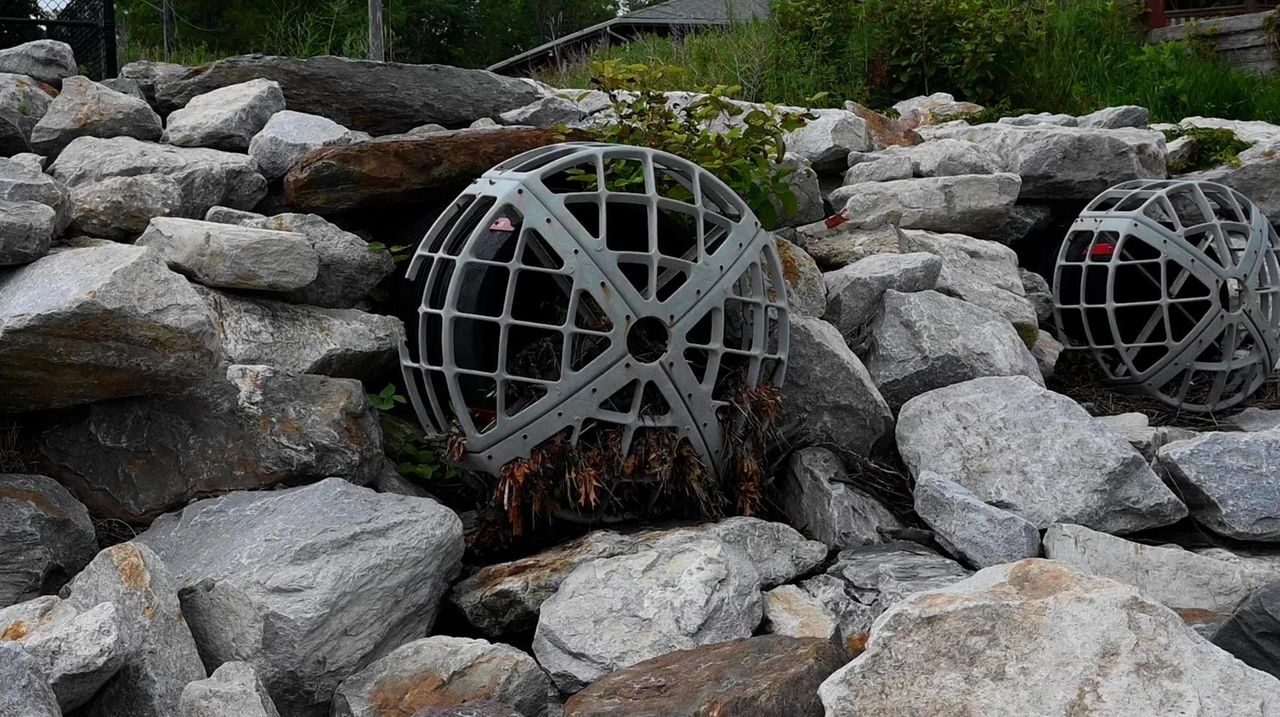 Brookhaven Superintendent of Highways Daniel Losquadro on June 15, spoke about the town's upcoming project to place a bioretention area and a water separation system that will allow sediments and contaminants to be filtered out so they do not end up in Long Island Sound. Credit: James Carbone

Suffolk County’s North Shore beaches in areas like Eatons Neck, Wading River and Rocky Point were closed in 2020 due to bacteria more often than any other region along the Long Island Sound, although Sound beaches improved as a whole, according to a recent report.

The closure rate of Long Island Sound beaches more than doubled — from 5.5% to 11.4% — when the weather went from dry to wet, according to the June report from the nonprofit environmental organization Save the Sound.

Stormwater runoff is the No. 1 cause of bacteria-laden water, according to the Suffolk County Health Department. The Nassau and Suffolk health departments routinely test for enterococci — which is largely harmless but is an indicator of fecal contamination — and issue health advisories and closures.

The analysis, based on data submitted to the U.S. Environmental Protection Agency by the health departments of local municipalities, mirrors the organization’s last report, which was issued in 2019.

Creek Beach, in Locust Valley in Nassau County, was No. 1 for water quality in New York State in 2020. Southold Beach in Southold, on the eastern North Shore in Suffolk, was rated second. Beaches in eastern Riverhead Town and Southold beaches fared the best overall.

All Sound beaches east of Iron Pier Beach in Jamesport received A+ ratings, although the beach at Camp DeWolfe, 12 miles west in Wading River, received a C-.

Valley Grove Beach in Eatons Neck in Huntington Town, an area that historically has had water-quality issues, received the worst grade on Long Island: a D.

The Long Island Sound Study, a coalition of stakeholders funded by New York State, Connecticut and the EPA, has set a goal of a 50% reduction in the 2014 level of bacteria-related beach closures by 2035. The region is behind that goal, as the total number of days closed, based on a five-year average, instead increased from 1,180.8 days in 2014 to 1,563.4 in 2020.

Stormwater picks up bacteria, largely from fecal matter, as it flows across roads, yards and parking lots. Overflowing or failing sewers can also feed into stormwater drains. The effects vary greatly from location to location — Valley Grove received the D, while about a mile away Hobart Beach received an A+ — and are influenced by factors including topography, the amount of wildlife in the area and the quality of tidal flushing.

Frank Bonomo, president of the Property Owners of Eaton’s Neck Beach, said a nearby storm drain becomes so overwhelmed during any rainstorm that residents have seen a maintenance hole cover blown off from water pressure. Valley Grove as its name suggests, is at the bottom of the area where runoff is funneled into the Sound.

"That maintenance hole drain has shot up like a geyser," Bonomo said. "Those storm drains were built in the ’60s and not built for today’s climate. The water needs an opportunity to filter."

Suffolk County officials are aware of the problem and have been trying to determine the source and extent of the contamination. Results show outfall pipes on the west shoreline are the likely culprit, according to the health department. Those results and recommendations have been provided to the state, Huntington Town and the property owners’ group in Eatons Neck.

The issue largely comes down to money. The group recently raised $125,000 to replace a bulkhead that was destroyed in 2018 and now will look to the storm drain problem, Bonomo said.

The department soon will undertake a project to replace an old cesspool ring sitting in a depression at the end of Hallock Landing Road in Rocky Point — engineering that Losquadro called an "inelegant solution" — and replace it with a system to filter water before it reaches the Sound. It is expected to cost nearly $600,000, which town Councilwoman Jane Bonner said the town has bonded to pay.

The Rocky Point area was originally developed as a summer colony without a comprehensive infrastructure plan, Losquadro said. The roads were built along areas that naturally drained into the Sound and now act as nonpermeable slide for runoff.

"They put Band-Aids on things before and you can see that they never found permanent solutions" for drainage, Losquadro said, gesturing to the cesspool ring. "Now, the real solution here is to provide some sort of separation for this water before it gets out to Long Island Sound."

In Setauket, a project is underway to reroute water from Setauket Pond on Route 25A into drainage basins and away from the harbor. Brookhaven Town is seeking proposals from a contractor to do the work that will be paid for with a state grant.

"The town has been working with us to come up with a process to redirect stormwater from 25A, which is a state road, that had been going into the harbor for the last 100 years," said George Hoffman, of the Setauket Harbor Task Force. "And now we’re going to be redirecting it into these catchment basins that will take out all the sediment."

Mark Tedesco, director of the EPA’s Long Island Sound office, noted that technology has become more sophisticated and it’s now possible to test pathogens to determine whether the source is human or animal.

"Those, too, could become quality beaches," he said. "It’s not beyond our reach if we have this commitment and consistency to address those problems."

What happened to Gabby Petito? Key developments in the missing person's case
If you see it, kill it: Why this pretty bug has experts sounding alarms
2:10
Fiance of missing Long Island woman goes missing too, police say
2:29
Workforce, middle-class homebuyers shut out on Shelter Island
Low COVID-19 positivity rates stir cautious optimism on LI college campuses
GOP moves to ban Nassau mailers during election season
Didn’t find what you were looking for?