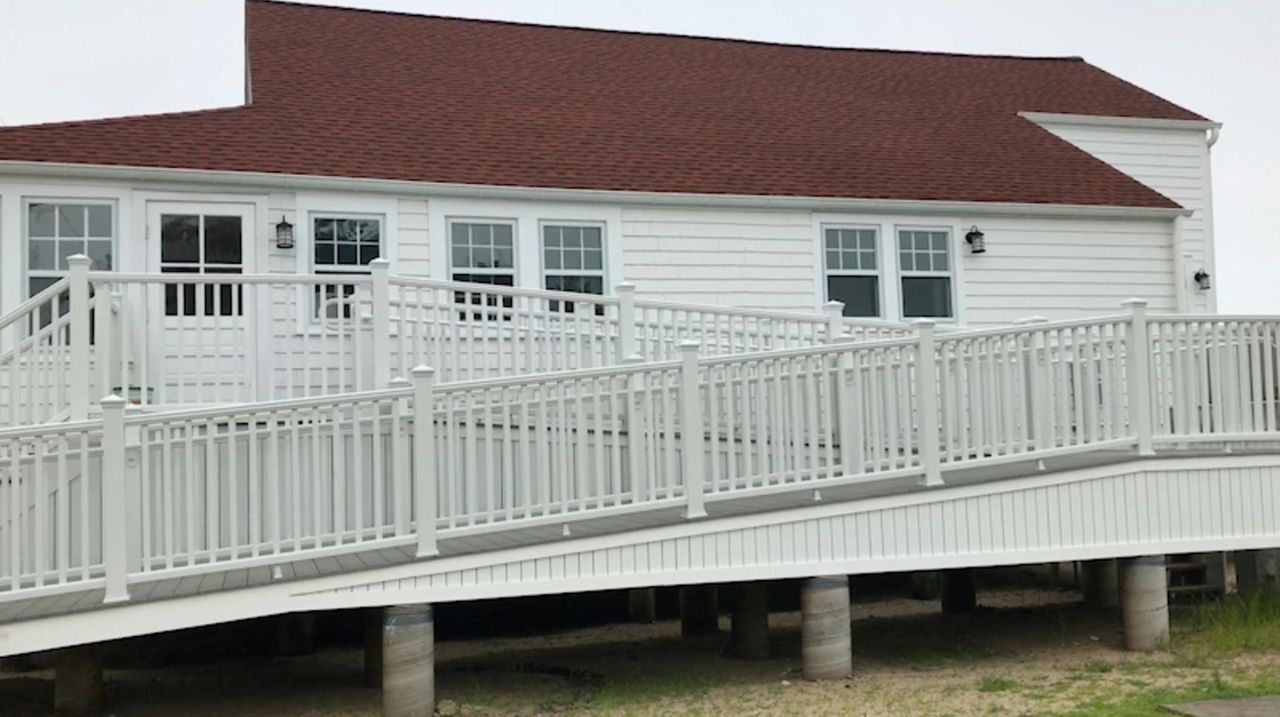 Damaged in past storms, the Oak Beach Community Center, which used to be a Coast Guard station, recently completed a year of repairs. Credit: Newsday / Rachel O’Brien

A 147-year-old former U.S. Coast Guard station that was damaged in superstorm Sandy has been renovated, restored to its World War II design and reopened to the Oak Beach community.

The Oak Beach Community Center was pushed off its foundation during Sandy in October 2012 and sat damaged for six years before renovations began in 2018 to return it to its early 1940s design, complete with a red roof.

The building was constructed in 1872 and used by the U.S. Life-Saving Service, the precursor to the Coast Guard. It is one of almost two dozen such “red houses,” so-named for their roof color, that were built along the South Shore of Long Island and is among a total of 71 in New York State, Massachusetts, Rhode Island and New Jersey.

Over the decades, the Coast Guard renovated the building, added plumbing and more space, occupying it until 1945. In 1948, the Coast Guard gave it to the Town of Babylon for the Oak Island Chapel Association to use after its chapel burned down, said town historian Mary Cascone. Church services were still held during summers until Sandy, she added.

In 1975, residents began holding civic meetings, dubbing it a community center. In that same year, a room was also used as a post office and served that function until 2000, with the old-fashioned mailboxes remaining in the building.

The station — which was first damaged by Tropical Storm Irene in 2011 — languished for years while town officials secured $882,000 in grants from the State Historic Preservation Office and bonded $750,000 to raise the structure to nine feet above sea level and complete renovations.

“When Sandy hit, the storm moved the structure, and the engineers … recommended knocking this thing down because of its condition,” Deputy Supervisor Tony Martinez said. Now, “the building itself is complete,” he added, while town officials work with county health officials to finish work on the septic system. But the Barrier Beach Civic Association is already back in the building.

Civic association president Jed Meade held the group’s annual summer meeting there recently, and, though the plumbing isn’t ready, the group is happy.

“The bottom line is that everyone that has seen it is thrilled,” Meade said. “What an improvement.”

Chris Penders of Pioneer Construction uncovered some original materials in the ceiling and walls that had been hidden, and salvaged and incorporated them as a nod to its past. Vincent Piccoli, deputy commissioner of public works, oversaw the renovation for the town.

Meade said he is grateful to town officials for taking on the project for the community.

“We’re looking forward to using it in various ways,” he said.

Martinez said that once the septic system and grading are complete, they will install a new historic marker with the 1872 date on it and the date of its rededication, in addition to including some Coast Guard items.

1872 -- The Oak Beach building is constructed on the ocean side of Oak Beach Road.

1899 -- The building is moved to the bay side of Oak Beach Road due to erosion on the ocean side.

1924 -- The building is renovated again, with updates that include adding an indoor kitchen, bathroom and expanded sleeping quarters, and equipment is moved to new boat houses.

1932 -- The station is moved back to the ocean side of Oak Beach Road, to its present location, because Ocean Parkway is being built.

1938 -- The Long Island Express Hurricane hits, eroding many feet of shoreline south of the station.

1945 -- The Coast Guard ends its operations there.

1948 -- The Coast Guard gives the building to the Town of Babylon for use as a chapel.