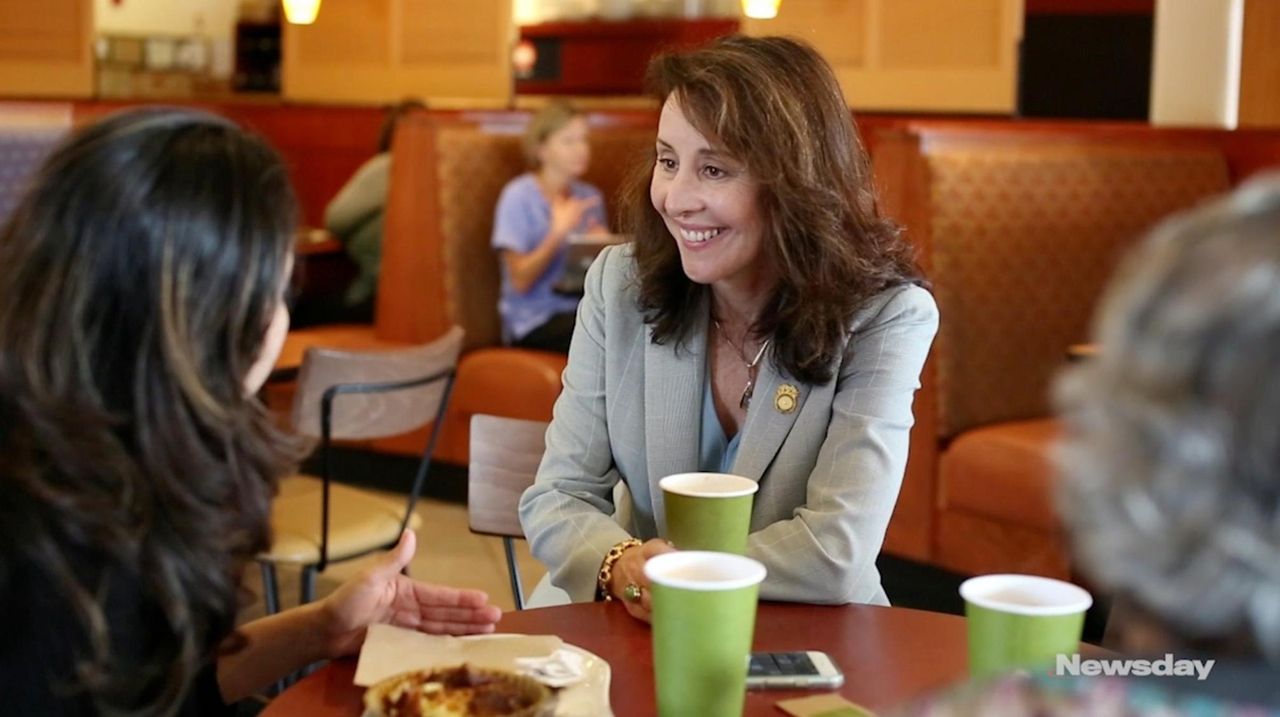 Residents had a chance Wednesday to meet with members of the Suffolk County Police Department, including Police Commissioner Geraldine Hart, at Panera Bread in East Northport. Credit: Barry Sloan

Suffolk County residents and police officers enjoyed coffee and conversation Wednesday as part of the third annual nationwide “Coffee with a Cop” program, an effort to foster community relations and collaborative policing.

In East Northport, Ayla Mazzitelli, 8, was afraid to go into the Panera Bread on Wednesday morning when she saw police officers standing there.

But her mother, Arzu Mazzitelli, nudged Ayla and her sister Demi, 6, inside.

“I want her to lose that fear,” the Smithtown mom said.

"I wear a shell and that’s what keeps me safe,” Wustenhoff said she told the sisters, adding the hard shell makes her like a Ninja Turtle.

Wustenhoff and more than a half-dozen other Suffolk officers — including police Commissioner Geraldine Hart — greeted Panera patrons, offering them free coffee and pastries and the chance to talk to police about their interactions in the community. The department also does other, similar events throughout the year.

“It’s really about accessibility,” Hart said. “How are we doing, what can we do better?”

Riverhead police also held several events. The Nassau County Police Department and many village forces in that county did not participate on Wednesday. Nassau police plan to hold their own event later this month.

In Hampton Bays, about a half-dozen Southampton Town police officers and two state troopers joined customers at the Melrose Deli for coffee, doughnuts and beef stew with lime juice. Officers said they chose the deli because Latino residents often stop there and they especially wanted to reach out to  that community.

Carlos Arbelaez, 53, of East Quogue, said he is a Colombian immigrant who came to the United States about 24 years ago and wants to see more events like this.

He said members of the Latino community need to work with Spanish-speaking officers who understand their culture.

“It makes it easier for everybody, for the citizens and for the officers,” he said.

Southampton Officer Erika Moncada, who grew up with Arbelaez’s children, said Latino residents are often reluctant to speak to the police for fear of being deported.

“They need to understand that they can come to us,” she said. “It’s hard, but you can only speak to so many people in one day. But it’s a good start.”