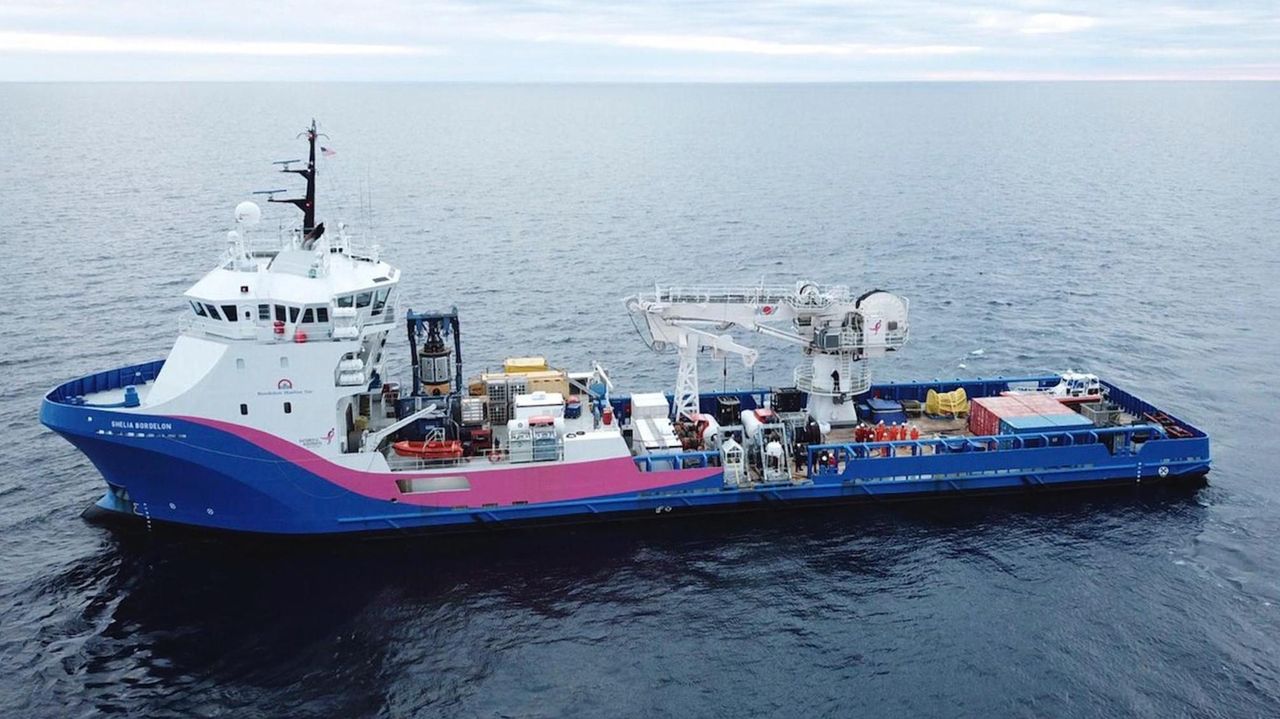 A team of divers examining a sunken World War II tanker Coimbra, which was shipwrecked 30 miles southeast of the Shinnecock Inlet after being torpedoed on Jan. 15, 1942, has found eight tanks containing oil, one with a pinhole through which oil has been leaking, officials said Thursday. Credit: Newsday / Alejandra Villa Loarca; U.S. Coast Guard

A World War II tanker sunken off the South Shore is being assessed for its potential pollution threat to Long Island waters after reports of apparent oil sheen on waters in the area.

Divers, who are part of a 51-member team examining the British tanker Coimbra, have so far found eight tanks that still contain oil, including one with a pinhole leak, officials said Thursday. The five-week project, which started about a week and a half ago, is being done with the assistance of a 6,000-pound remotely operated underwater vehicle.

Florida-based Resolve Marine Group, an emergency response and salvage company known for removing vessels buried at sea, is conducting the assessment of the tanker, which was shipwrecked 30 miles southeast of the Shinnecock Inlet after being torpedoed, officials said.

The Coimbra was loaded with about 2.7 million gallons of lubricating oil — which is denser than gasoline — when it sunk, and most of that was thought likely to have spilled or burned when it went down on Jan. 15, 1942.

Since 2015 the Coast Guard has been receiving satellite observations from the National Oceanic and Atmospheric Administration showing sporadic oil sheens on the ocean surface in the tanker’s vicinity, said Capt. Kevin Reed, commander of Coast Guard Sector Long Island Sound.

The team will map the wreck site, assess the amount of oil left, look at the structural integrity of the cargo tanks and determine how to safely remove the oil in the tanks, officials said. So far evaluations show just small or medium amounts of oil left in the eight tanks, said Aaron Jozef, deputy director of projects for the Resolve Marine Group.

The quickly dissipating sheens in the tanker's vicinity could amount to 5 to 10 gallons each on average, Reed estimated — small amounts, nothing that would “ooze and wash up on shore.” They evaporate quickly, from wind, waves and the sun, said Matt Franklin, state Department of Environmental Conservation director of emergency management.

But the investigation has shown “a source” for leaking oil, a pinhole in one of the tanks, Reed said at a news conference at Coast Guard Station Fire Island in Babylon.

The tanker was found to be hit by two separate torpedoes, Jozef said, with the vessel ending up in three sections on the ocean floor.

On the project’s first day, those assembled held a moment of silence to honor those who lost their lives so long ago, Reed said.

Seventy-seven years ago, the Coimbra had set off from Bayonne, New Jersey, and was heading to Halifax, Nova Scotia. Just 10 out of the 46 crew members were said to have  survived the attack.