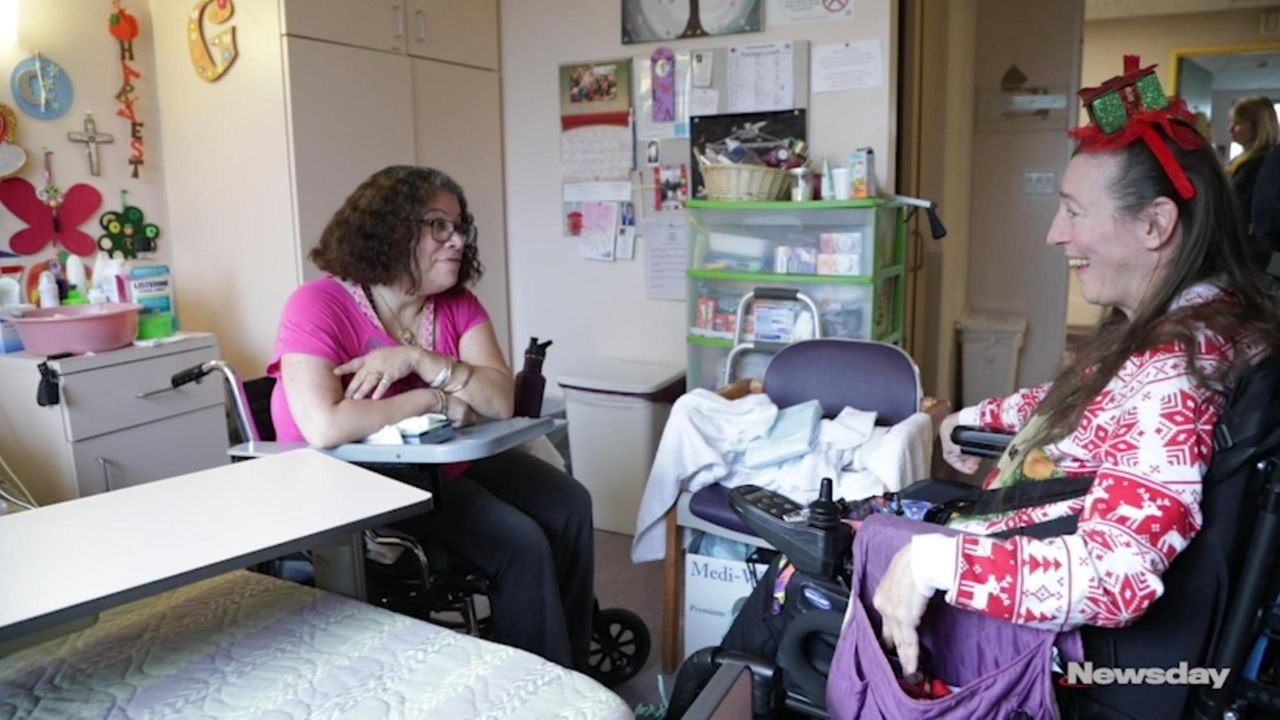 Maria Golden, 51, who has cerebral palsy and has used a wheelchair all her life, talked on Thursdsay about her volunteer work at Gurwin Jewish Nursing & Rehabilitation Center in Commack and how she likes to make the residents feel happy.  Credit: Newsday / Yeong-Ung Yang

Maria Golden made her way room-to-room through the nursing home, chatting with residents, talking about the holidays and the latest exploits of her cat and two parakeets.

At a time of year when people's hearts turn to giving, volunteering and helping those less fortunate, Golden shines. The 51-year-old woman has cerebral palsy, a neurological disorder that impairs muscle coordination, and has used a wheelchair all her life. And while she loves to visit and talk with the nursing home residents, even simple speech for her takes great effort.

She still does it, and more.

Golden doesn't just volunteer during the holidays. Her life is built around giving her time. She comes to Gurwin Jewish Nursing & Rehabilitation Center in Commack every Monday and Thursday. Though it is a Jewish-affiliated center, residents are of many faiths.

On Tuesdays, Golden is at Stony Brook University Hospital, where doctors had helped her overcome breast cancer. And on Sundays, she is a greeter at St. Mark Roman Catholic Church in East Shoreham.

"I love to volunteer; I love to make people happy," said Golden during her nursing home visit Thursday. "I love to do that."

In her way, Golden epitomizes the spirit of the holidays, keeping that joy alive in daily doses throughout the year. Her smile, which rarely leaves her face, lifts the spirits of the residents.

"There's something magnetic about her," said Gurwin president Stuart Almer. "People gravitate to her."

Moreover, the nursing home staff members, seeing her effort and sacrifice, say she is nothing less than an inspiration.

"If I'm not having the best day of my life, I see Maria," said Kathleen Donnelly, director of volunteer services. "And I think about how she gets herself here and everything, and I say, 'How can I possibly say I'm too tired to do this?' "

The bus ride to the nursing home can take an hour. From her group home in Ridge, Golden takes the county paratransit bus, which has a lift that lowers her and her motorized wheelchair right outside the nursing home.

As she wheels her way through the glass front door, Golden sees the place is in full holiday mode. The front desk has flowers and gift-wrapped boxes that have been mailed to residents.

On this day, Golden has on a sweater with the big face of a red-nosed reindeer. On her head, a tiny green gift box with ribbon.

Golden wheels off to a room to check in on Maria Perez, cruising by staff who say hello to her by name. She loves that so many people know her here.

Perez is 100 years old, but you would never guess it. She's spry and alert and chatty.

"How are you? How are you doing?" Golden says to her.

Perez, sitting in her own red wheelchair beside her bed, responds with a phrase she uses a lot.

"See my outfit?" Golden says, showing off her sweater.

Perez mentions that she has lived at the nursing home for about six years. She came to the United States from Cuba in 1960, just after Fidel Castro came to power. She used to be a busy bee, always in the hallways, but she has knee trouble now, so she stays mostly in her room.

Perez does most of the talking, and that's OK with Golden.

"She helps me to learn Spanish," Golden says with a laugh.

Many days, the pair are joined by Elza Gonzalez, who comes over from another room.  Gonzalez, 45, has been here for seven years after two aneurysms that left her with numbness and mobility problems.

"We always have a little party," Gonzalez says.

They talk about the weather, or their relatives. Sometimes, the conversation turns to the stray cat, Missy, that Golden feeds, or her two parakeets, Maria and Rebecca.

"It's good to talk," Gonzalez said. "I always love to talk."

Golden started volunteering at the nursing home about four years ago. Donnelly, the volunteer director, wasn't sure it would work out.

"But she has such an infectious personality, always smiling and always happy," Donnelly said.

Over the years, Donnelly has come to learn about Golden's past, in which her troubles went beyond her physical challenges.

Golden spent her childhood in foster care. Her mother was only 17.

"Some abused me, some didn't," Golden said

In 1993, when she was 26, a caseworker helped Golden reconnect with her birth mother, who had married her birth father and had several other children.

Since then, Golden gets regular visits from her family members.

These days, a lot of Golden's talks with residents revolve around Christmas and the holidays.

Perez has a festive little tree in her room, and Gonzalez announces that she is staying with family for five days.

As for Golden, she will celebrate with her family at her sister's house in Coram.

And she'll be wearing her reindeer sweater.