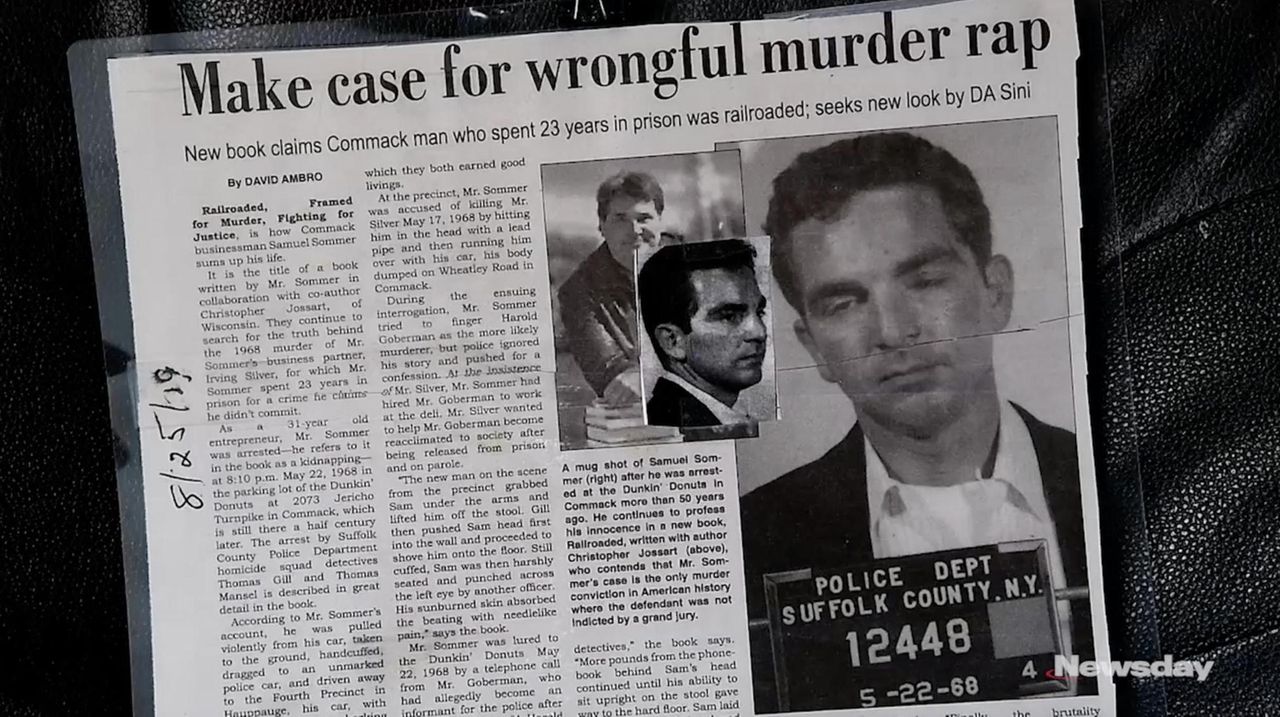 Sam Sommer spent two decades in prison for a murder he says he did not commit. He has written a letter to the Suffolk Conviction Integrity Bureau, asking it to review his case and vacate his conviction. Credit: Newsday / J. Conrad Wiliams Jr.

An 83-year-old former delicatessen owner who spent two decades in prison for a murder he says he did not commit has asked the Suffolk County district attorney’s office, which prosecuted him 50 years ago, to review the case and ask a judge to vacate his conviction.

Sam Sommer was convicted in the 1968 murder of his business partner, Irving Silver, based on what he said was his false confession.

Sommer said the letter he sent to the Conviction Integrity Bureau created by Suffolk District Attorney Timothy Sini in 2018 to investigate wrongful conviction claims is his last shot at redemption.

“I’d like to live the rest of my life as an innocent man,” he said.

Sommer hopes to become the second defendant convicted of murder in Suffolk County to be exonerated by a court. In May, a judge vacated the second-degree murder conviction of former Bellport resident Keith Bush, who was a 17-year-old high school student when he was charged in the 1975 slaying of a 14-year-old girl. Like Bush, Sommer also says he was beaten by Suffolk detectives, who said he confessed to the crime.

“The reason I keep fighting this is because I’m still mad as hell,” Sommer said during an interview at his small apartment in upstate New Windsor, where every table, desk and shelf is covered with piles of legal documents and law books. “I believe in justice and I want to believe that it will prevail.”

Sommer, unlike Bush, faces opposition from the victim’s family.

“Absolutely not,” said Silver’s daughter Barrie Handleman, when asked if Sommer’s conviction should be vacated. “He did it. He murdered my father and now he wants that all forgotten? He was given a fair trial. My father was not given a chance in hell.”

Suffolk prosecutors at the time said Sommer confessed to clubbing Silver over the head with a metal pipe, then running over his body with a car to make it appear he was the victim of a hit-and-run. Investigators said the motive was money — Sommer and Silver had taken out insurance policies that entitled either partner to $50,000 if they died.

Sommer, the father of seven children, was convicted after a three-week trial in Riverhead that ended on Dec. 16, 1970. His quest to clear his name has led him to file multiple unsuccessful lawsuits and legal challenges decades after he was released on parole from Wallkill Correctional Facility in 1991.

In his Sept. 5 letter to the Conviction Integrity Bureau, Sommer said investigators should have focused on a Long Island contractor who had links to organized crime and was also a Suffolk police informant.

Defendants who were convicted decades ago face daunting challenges in convincing prosecutors to take a fresh look at their cases, said Barbara O’Brien, a professor of law at Michigan State University.

“It is always hard to be exonerated,” O’Brien said. "Witnesses die, or can't be located. Evidence gets lost or destroyed or is compromised in some way. It is hard for the defendant to prove their case after the passage of time."

Sommer served 21 years in New York state prisons for Silver’s murder before he was paroled, then returned to prison for three additional years because of a parole violation when Sommer said he was accused of practicing law without a license after providing legal advice to an acquaintance.

Suffolk Police Commissioner Geraldine Hart would not comment directly on Sommer's request but said she supports Sini's efforts to investigate claims of innocence through the integrity bureau.

“The Suffolk County Police Department is committed to ensuring justice is served today and in years past. I am supportive of the district attorney’s Conviction Integrity Bureau and appointed a department liaison to work with the bureau,” Hart said in a statement.

O'Brien said reversals are hard to achieve because the burden has flipped from the prosecutors to the defendants. "That is what makes conviction integrity bureaus such a remarkable development," she said. "It is formalizing a second look that doesn't come naturally. What makes conviction integrity bureaus so important is that the institutionalize something that doesn't come naturally."

One of the detectives Sommer alleged beat him, Thomas Gill, dismissed the effort.

“One thing I have learned,” said Gill, now retired and living in Florida, “is that everybody in prison says they are not guilty.” He declined to comment further.

Silver’s daughter, meanwhile, said Sommer lied when he told The New York Times in 2017 that Silver owed money to loan sharks. She said her father was a deeply religious, hardworking man who had nothing to do with mobsters.

“This was not my father. He got up every day before dawn to go to work and he worked his [expletive] off," Barrie Handleman said.

Growing up in the Bronx, Samuel L. Sommer played baseball and football at James Monroe High School. When he was 16, he got a job delivering butter, eggs and meat by bicycle, an after-school job that launched a meat distribution business and delicatessen.

After graduation, Sommer served in the Army in Fort Riley, Kansas, and played minor league baseball before marrying his longtime sweetheart, Elaine, in 1957 and moving to an apartment in Queens. Like thousands of other New York City couples seeking room and fresh air for their growing families in the 1950s and 1960s, Sommer and his wife moved to Long Island, purchasing a two-story, four-bedroom home in Commack in 1962.

Sommer also opened his deli — Rosen’s — in a strip mall off Jericho Turnpike in Commack. He brought in Silver, a former butcher, to help run what Sommer said became a successful business. Sommer said the business was doing so well in the spring of 1968 that he decided to take his wife and children to Florida for a vacation.

“I had six slicing machines going, that is how busy it was,” Sommer said. “I was a hard worker. Whatever I touched turned to gold.”

Sommer said he was forced to return to New York after Silver called him to tell him a check had bounced from a contractor to whom they had loaned money. Around the same time, Sommer said he got a call from one of Silver's sons, telling him his partner had been killed.

Sommer said he then received a call from the contractor who claimed he had information about Silver’s killing and told him to meet him at a Dunkin’ Donuts in Commack.

The contractor never showed up. Instead, according to Sommer, Suffolk County homicide detectives dragged him from his family’s station wagon as it idled in the doughnut shop parking lot while his 200-pound St. Bernard barked from the backseat.

Sommer said Suffolk officers pushed him into an unmarked police car and drove him to the Fourth Precinct in Hauppauge. They took him to a tiny basement interrogation room, Sommer said, where they kicked him in the groin, punched him in the face, pounded him with telephone books and forced him to confess to Silver’s murder.

When he refused, Sommer alleged the detectives made up a confession. “The whole incident was a setup,” Sommer’s Sept. 5 letter said.

Suffolk County also acknowledged that Sommer had been assaulted by police by sending Sommer a check for $5,000. The notation on the check said it was for “damages resulting from issues on or about 5/222/68 (sic).”

“The Suffolk County Police Department and district attorney’s office engaged in and permitted improper practices to occur in homicide investigations, including perjury, as well as grossly deficient investigative and management practices,” the report said. “Because of credibility problems with prosecution testimony, including police testimony, and other defects in homicide prosecutions, guilty persons may well have been allowed to go free.”

In 2014, the Justice Department began reviewing allegations of police misconduct and bias as part of a legal settlement with Suffolk prompted by Latino community complaints after the 2008 hate-crime killing of an Ecuadorean immigrant by a group of teenagers in Patchogue. Former District Attorney Thomas Spota and his aide Christopher McPartland, accused by federal prosecutors of covering up an assault on a suspect by former police Chief James Burke, were convicted on charges of obstruction, witness tampering and conspiracy in December.

Sommer said he lost everything after his conviction: his home, his meat distribution business and his deli. His wife, who died in 2017, struggled to support the family while Sommer was in prison. Two of the couple’s daughters, Karen DuBray of Plattsburgh and Marlene Sommer of Warwick, told Newsday their family was frequently hungry and homeless during those years.

“Instead of going to school and playing with other kids in Commack neighborhoods, our childhood consisted of developing plans to steal food from grocery shelves,” Sommer’s letter to the district attorney quotes DuBray as saying.

“Sam couldn’t kill anybody,” said Cirrone, who met Sommer when they were boys in the Bronx. “He was a good salesman, a good businessman. He was a wonderful father. He was not a killer.”

Joseph Scibilia, a Long Island lawyer who helped Sommer with his business dealings, said he was disturbed when he saw Sommer in the basement of the Fourth Precinct shortly after his arrest.

“He looked beat up to me,” Scibilia said. “He told me they kept bashing him with telephone books and telling him nobody will ever see him again.”

Sommer, citing his age, has a sense of urgency.