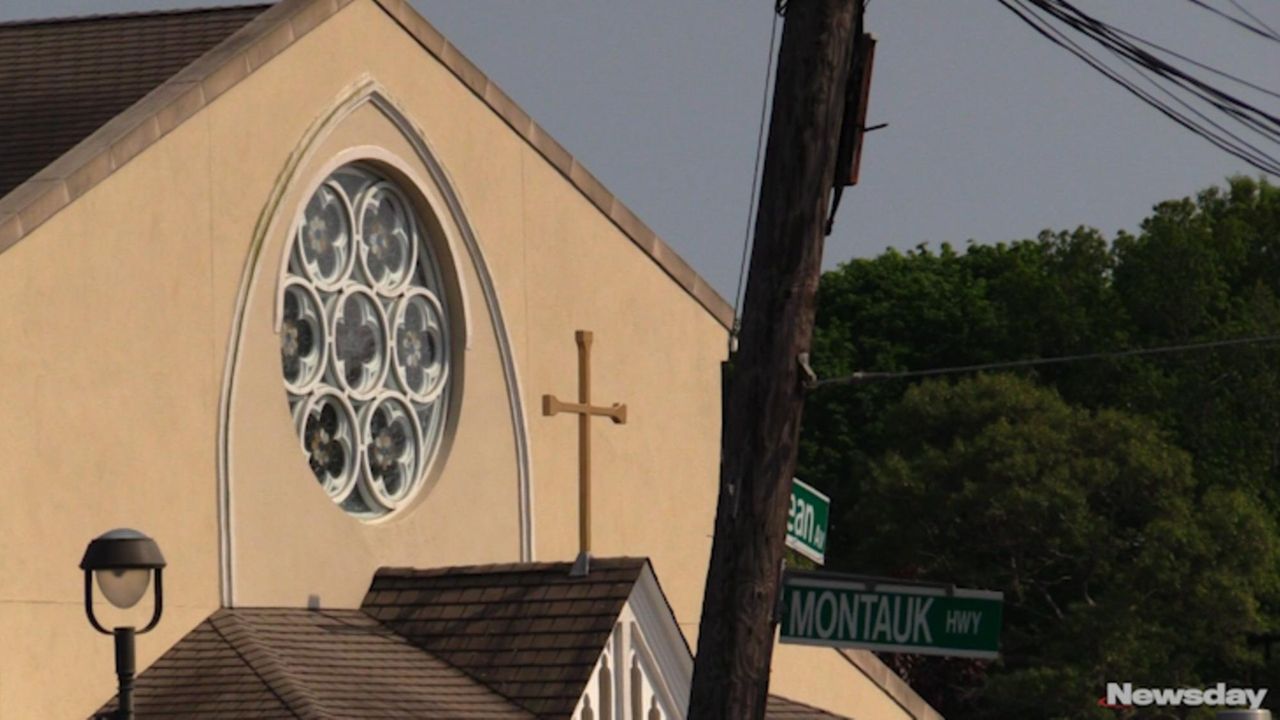 On Friday afternoon, May 19, 2017, the man who barricaded himself inside a Catholic church and threatened to use incendiary devices killed himself,  Suffolk County Police Commissioner Timothy Sini said. "He may have tried to blow up his van and/or burn down the church," Brookhaven Town Councilman Daniel Panico said, describing events at St. John the Evangelist Roman Catholic Church. Credit: James Carbone

A man who committed suicide after barricading himself inside a Catholic church in Center Moriches early Friday afternoon and threatening to use incendiary devices has been identified as John Beneventano of Shirley, Suffolk County police said.

No one else was injured in the incident.

At another entrance, the man threw a match and gasoline at officers, Sini said.

Center Moriches church has man barricaded inside On Friday afternoon, May 19, 2017, the man who barricaded himself inside a Catholic church and threatened to use incendiary devices killed himself,  Suffolk County Police Commissioner Timothy Sini said. "He may have tried to blow up his van and/or burn down the church," Brookhaven Town Councilman Daniel Panico said, describing events at St. John the Evangelist Roman Catholic Church. Credit: James Carbone

“The officers retreated and were not injured,” police said in a news release issued late Friday night. “Beneventano, 44, then lit a match and started a fire in the building.”

Police said officers retreated from the church and established a perimeter outside while Emergency Service Section officers and the Hostage Negotiation Team tried to make contact with Beneventano.

Sini did not say whether the man damaged the church or reveal the cause of death.

The 911 call that alerted Suffolk police came from a retired NYPD officer who happened to be passing by, Sini said.

The former officer told the dispatcher a man was trying to set fire to a vehicle in the church parking lot, Sini said.

Brookhaven Town Councilman Daniel Panico said earlier the man “may have tried to blow up his van and/or burn down the church.”

Suffolk police had closed Main Street in both directions between Reeves Road and Railroad Avenue about 2:30 p.m. The church is nearby, on the corner of Ocean Avenue and Montauk Highway/Main Street.

The Rev. John Sureau, St. John’s pastor, reminded his parishioners to remain hopeful in the face of a life lost, a building seriously damaged, a shaken community and a broken parish community.

“We will come through this because of the faith that makes us Catholic, a faith that transcends any building, that overcomes any tragedy,” he wrote in a letter to parishioners on the church’s website.

Thanking the first responders and the hundreds of people who came to the church offering their help, he said: “We find reasons for hope in the many acts of goodness we have been recipients of in these hours.”

Witnesses said helicopters hovered overhead during the incident. A SWAT team, police trucks, firefighters and ambulances also were at the scene, witnesses said.

Mary Zapata, who works at the Moriches Hospital for Animals, on the southwest corner of Ocean Avenue and Main Street, said she saw a white van with gasoline cans by it parked in the church’s parking lot.

“They’re probably like five-gallon cans, like the ones you fill up at the gas station. There are quite a few of them,” she said.

By late afternoon, members of the SWAT team were seen entering and exiting the church through what appeared to be the church’s main entrance.

The police kept the public from the area, with surrounding streets blocked off with yellow tape.

Thanking first responders for “handling this situation with the utmost professionalism,” Dolan said all Masses and services will be held in St. John’s school auditorium, and the parish website and Facebook page would list updates.

Sini thanked the members of the Suffolk Police Department.

“Once again our officers put their lives on the line to protect the residents of Suffolk County,” Sini said. “I want to thank all the members of the Department who responded so effectively today.”

The investigation is continuing. Detectives ask anyone with information on the incident to call the Homicide Squad at 631-852-6392.

CORRECTION: An earlier version of this story misstated the age of John Beneventano.