Investigators at the scene of the deadly fire at the Fairfield apartment complex on Country Club Drive in Coram on Tuesday morning. Credit: James Carbone

Police officers raced around a gated apartment complex in Coram early Tuesday morning, frantically pounding on doors to rouse sleeping residents as a blaze devoured the homes of their neighbors and killed a 71-year-old woman who couldn’t escape in time.

The neighbors grabbed their coats, wallets and pets and ran outside to see the four-unit building at the Fairfield Courtyard at Coram apartment complex on Country Club Drive already engulfed in flames that threatened to spread to other apartments.

Susan Harelick lived on the first floor, where authorities believe the fire started. The woman, who sometimes used an oxygen tank for health reasons, had just crossed her home’s threshold when tragedy struck.

First responders discovered Harelick's body trapped beneath fallen debris. “She either collapsed by smoke inhalation or from fallen debris or she just couldn’t make it any further,” Beyrer said. “She’s a small woman so it wouldn’t have taken much.”

The nightmare began at 2:39 a.m., when a resident was roused by “popping sounds” and saw smoke coming from Harelick’s apartment. The resident called the complex’s building maintenance and 911, Beyrer said, summoning Sixth Precinct officers to the scene within four minutes.

Firefighters from Coram, Selden and Gordon Heights were dousing the raging flames within 19 minutes of the first report.

Robert Gorman, 61, who lives in the building next door, said his housemate’s daughter woke him up. “I fell asleep on the couch and she woke me up, ‘Get up, get up, there’s a fire,’ ” he said.

Groggy from sleep, he thought she was joking at first. “When she said 'fire,' I didn’t expect anything major,” he said.

Frank Walls, who lives in a neighboring building just a few feet away with his wife, Candi, two dogs and a tarantula, said he put their pets in his truck when they were evacuated. He saw a cat jump off a fiery overhang and run under a car. The cat, whose fur was singed and paws burned, was taken to a veterinary emergency room.

“The cops were going around, checking everybody. They checked the woods to make sure nobody was there,” Walls said.

Walls and other residents said an air-conditioning unit that had been attached to the burning building exploded shortly after the neighbors were woken up, adding to the night’s terror.

By 4 a.m., the fire was deemed under control — though it would reignite around four hours later, summoning firefighters back to the complex. 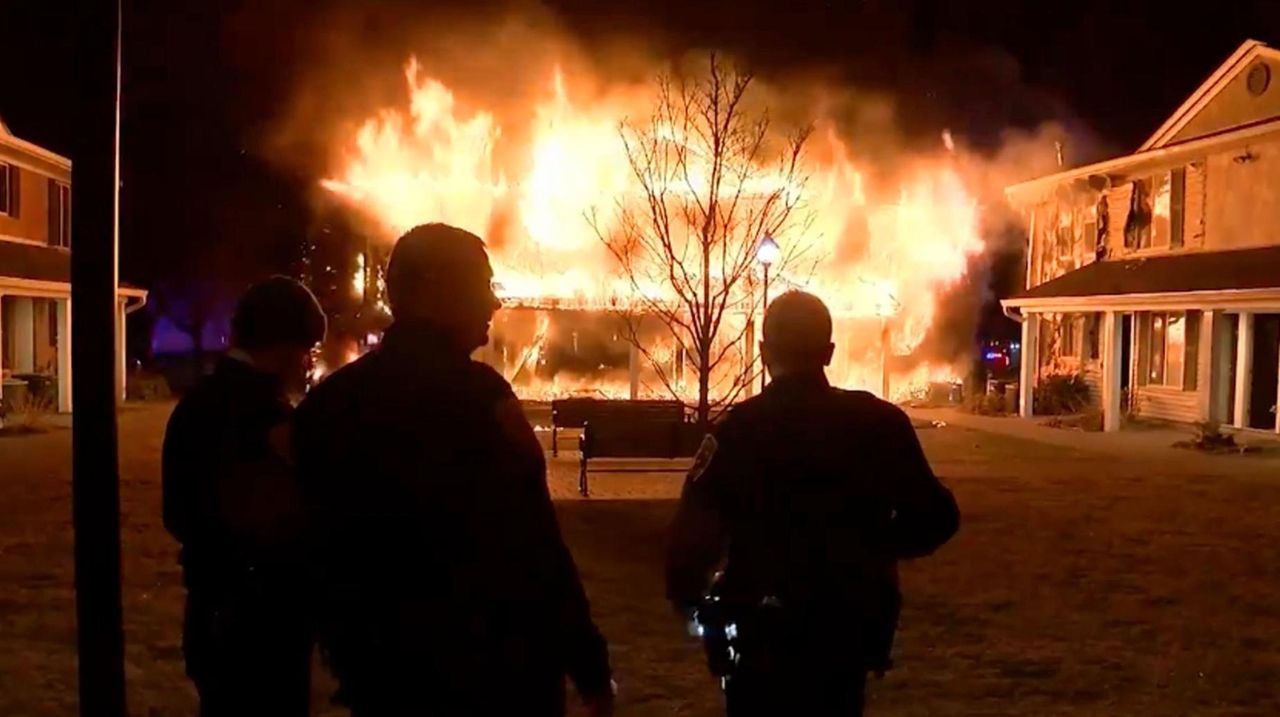 One dead as fire consumes apartment building in Coram complex On Tuesday, firefighters battled an intense blaze at a gated apartment complex in Coram that claimed the life of one of its residents, according to Suffolk County homicide squad. The fire at Fairfield Courtyard began about 2:40 a.m. and was under control by 4 a.m. Credit: James Carbone; Stringer News Service

The cause of the fire remains under investigation by the homicide squad and arson detectives, police said, but it does not appear to be criminal. No other injuries have been reported.

Harelick is Suffolk County’s third victim of a fatal fire in 2019. Two women were killed in North Patchogue earlier this month. She was pronounced dead at the scene. Her exact cause of death remains undetermined. Harelick was not hooked up to the oxygen tank when she was found.

Harelick's neighbors mourned her loss. They said she mostly kept to herself but some had shoveled out her car or brought her mail in. They surveyed the damage hours later, watching as authorities flew a drone over the charred wreckage and later raked up debris amid the lingering smell of smoke.

“Imagine having someone knock on your door, looking through the blinds and seeing balls of flames,” recalled Colleen Herbs of Medford, who was visiting a friend in the building next door.

By noon, Cathy Garrison, 55, looked in “disbelief” with her neighbors at the gutted building. She lives in an adjacent building and was forced to load her cat, Pookee, into its carrier and grab her purse, passport and glasses before running out the door to see “a mass of flame.”

But her home wasn’t damaged, unlike four others. She said one man had moved into his now-blackened apartment on March 1.

“This young man who had just moved in, who didn’t really know this woman, he broke down in tears when he heard she’d died in it,” she said.

With James Carbone and Craig Schneider