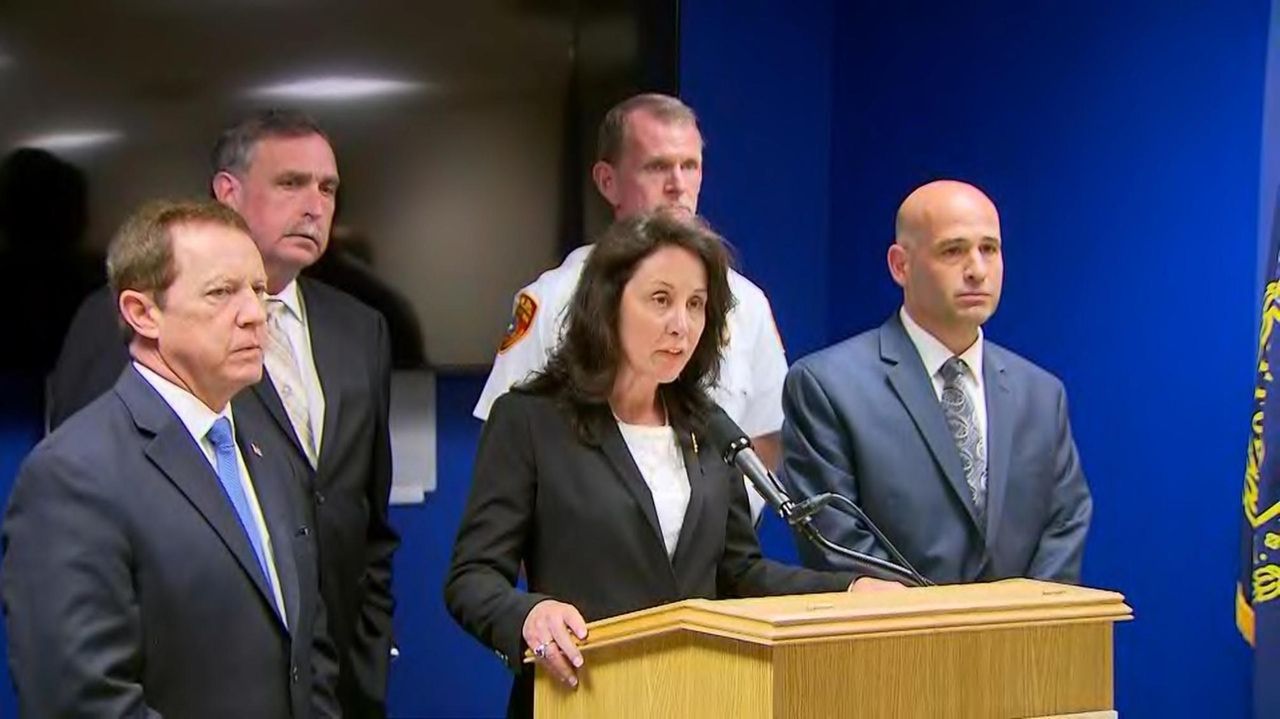 Suffolk Police Commissioner Geraldine Hart at a news conference Wednesday at Yaphank headquarters said she was “not able to comment” on the cause of death of the two people found dead in a car in western Virginia, who are believed to be a missing 2-year-old Long Island boy and his father.

This story was reported by Michael O’Keeffe, Joan Gralla, Ellen Yan and Robert Brodsky. It was written by O’Keeffe.

Two bodies found in Virginia are believed to be those of a missing Long Island toddler and his father, who had abducted him, Suffolk police Commissioner Geraldine Hart said Wednesday.

Although Suffolk police said the father, John Ligurgo III, had set fire to the Coram condominium he once shared with the boy’s mother and was armed with a hunting rifle when he fled with his son, State Police declined Tuesday to issue an Amber Alert for the boy, Jovani Ligurgo, 2.

New York State Police in a statement Wednesday called the case a “terrible tragedy” but maintained that an Amber Alert was not warranted because Ligurgo, 43, had no criminal record or violent history and had never harmed the child.

They also said Ligurgo and his son had left the state in his 2013 Jeep Grand Cherokee by the time the agency was notified about the abduction.

“Once it was established that the vehicle had crossed into New Jersey, the focus of the search moved there,” the statement said.

Police in Rockbridge County, Virginia, found the two bodies in a residential area Wednesday at 8:45 a.m. in a vehicle that matched Ligurgo’s, police said. Hart said authorities were awaiting positive identification of the bodies.

An Amber Alert — also known as America’s Missing: Broadcast Emergency Response Plan — is a voluntary partnership among law-enforcement agencies, the media and transportation agencies to issue an urgent bulletin in child-abduction and missing person cases.

Hart said Suffolk police sent the information about the missing father and son into a national alert system issued only to law enforcement.

Jovani’s mother, Maria Busone, in an interview with News 12 Long Island, expressed frustration with the failure of authorities to put out an Amber Alert despite the circumstances of the boy’s abduction.

“When you know specific facts . . . the child is not where he is supposed to be and the house is on fire. Find the child,” Busone said. “How many children need to be lost before the law is changed or a criteria is changed?”

“I will be without my son for the rest of my life,” Busone added, describing him as a “bundle of joy.”

Busone told investigators she had dropped Jovani off at Ligurgo’s condominium complex on Brettonwoods Drive in Coram at about 7 a.m. Tuesday, Hart said during a news conference at police headquarters in Yaphank.

Suffolk police received a 911 call about the fire at the condominium at about 3:30 that afternoon, Hart said, and investigators quickly determined the cause appeared to be arson. Nobody was home when firefighters arrived.

Busone, meanwhile, called police about 4:30 p.m. after Ligurgo failed to return Jovani to her Smithtown home as required by a visitation order. She then drove to the condo, where she was interviewed by Suffolk police.

Busone and Ligurgo were not married and Busone was petitioning for full custody of Jovani, Busone’s sister, Jackie Pulizzi, told The Associated Press. Busone wanted Ligurgo to undergo drug testing and a psychological examination as a condition of visitation, Pulizzi said. A hearing had been scheduled for Thursday.

Ligurgo had recently been fired from his job as a courier, a police source said.

Hart said Suffolk police approached Jovani’s disappearance as a missing persons investigation after speaking to Busone and asked authorities in Nassau County and New York City to be on the lookout for the two. New York City police told officials in Suffolk County at 7:30 p.m. that a vehicle matching Ligurgo’s had crossed the George Washington Bridge into New Jersey.

Hart said it is up to the state police to decide if an Amber Alert is warranted. Suffolk police chief of detectives Gerard Gigante said during Wednesday’s news conference that he wasn’t sure when the department told state police that Jovani was missing.

The Rockbridge County Sheriff’s Office, which found the bodies Wednesday morning, did not return calls for comment.

Jovani’s family struggled with the boy’s loss Wednesday. His half-brother, Anthony Busone, 26, said his mother called Ligurgo on his cellphone and tried to text him on hers, and when neither worked, she found out Ligurgo had canceled service on both the phones.

He said he didn’t visit his little brother much until the youngster’s parents broke up in April — and then he fell in love with the kid with a gaptoothed grin.

“His smile, as everybody keeps saying, it’s the most true thing about him, his infectious smile,” the brother said.

Last Sunday, the two went to a park, where Anthony Busone introduced Jovani to fried Oreos. Jovani loved them.

“I was looking forward to watching him grow up, do little boy things, go ride some bicycles, dirt bikes, anything, whatever he wanted to do,” Anthony Busone said as he sobbed. “If he wanted to play with . . . dolls, I would have played with dolls.”

Now, the family is trying to pay for the boy’s funeral. Friends have set up a GoFundMe page to raise $12,000.

The family has hired a lawyer to look at the Amber Alert issue, Anthony Busone said.

“Something has to change,” he said. “It’s like the old saying. Better safe than sorry. But here we are now, on the sorry end. For what?”

Pulizzi told The AP: “It’s like a nightmare. It’s heartbreaking. The poor baby hasn’t even gotten a chance to live.”

Timeline of a tragedy

4:30 p.m.: Busone tells Suffolk County police that Ligurgo did not return Jovani to her home in Smithtown as they had arranged.

5:30 p.m.: Busone drives to Ligurgo’s Coram home and is questioned by Suffolk police investigators, who determine that the fire in the condominium appears to be arson.

7:30 p.m.: New York Police Department tells Suffolk police that a vehicle matching the description of Ligurgo’s Jeep Grand Cherokee had crossed the George Washington Bridge into New Jersey. Suffolk police contact agencies in New Jersey and Pennsylvania to be on the look out for Ligurgo’s vehicle.

7:53 p.m.: Suffolk police ask New York State Police to issue an Amber Alert for Jovani Ligurgo. The state police decide the request is not warranted because the father did not have a criminal record or a history of violence, and because the vehicle had left the state

Wednesday, 8:45 a.m.: Two people believed to be Ligurgo and his son are found dead in a vehicle in Rockbridge County in Virginia.

Cops say they believe triple killing in Farmingville was a targeted attack
Abandoned black swans scooped up in Southold
After vandalism, cleaned Floyd statue will move to Manhattan
School administrator criticized for equity efforts steps down
Cuomo team assails investigators as probe hits pivot point
1:52
Going to the chapel, but first a detour to LI for that marriage license
Didn’t find what you were looking for?