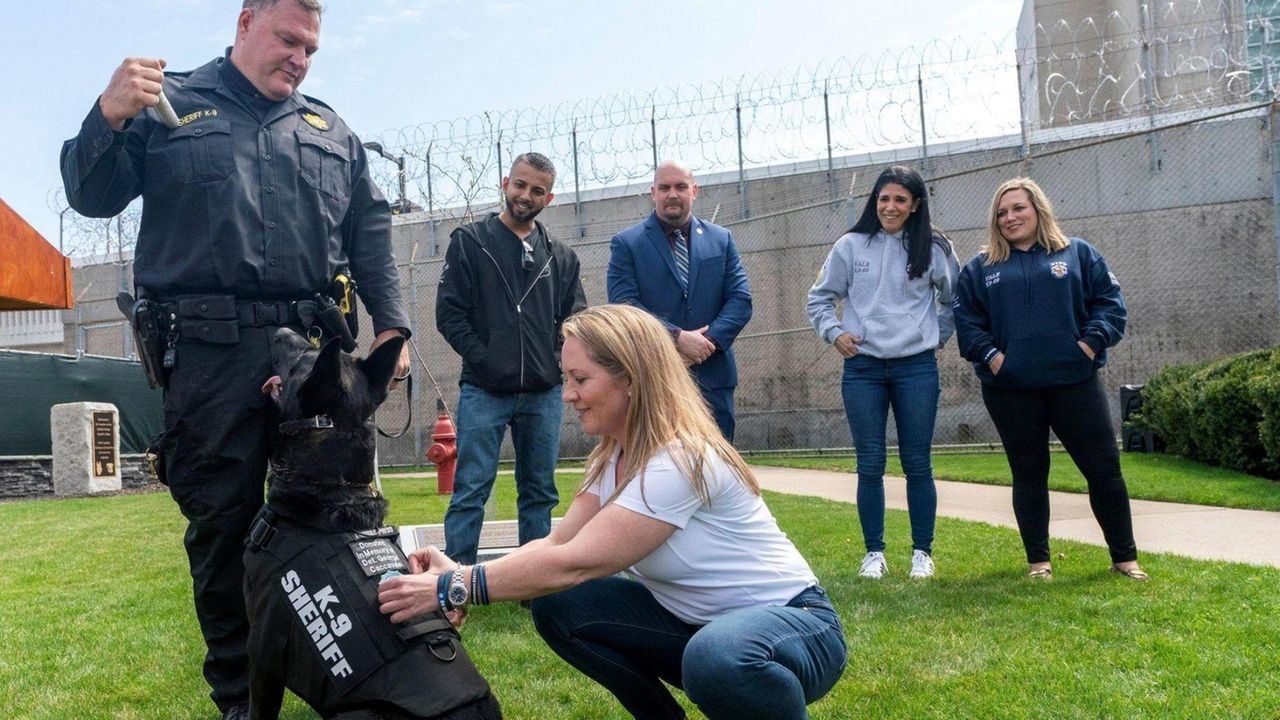 Nearly 13 years after the tragic death of Suffolk County Correction Officer Andrew Reister, the fallen officer’s wife said Saturday’s dedication in Riverhead of the newest K-9 member of the Suffolk County Sheriff’s Office in his name was a fitting tribute to the life of a family man who loved his job.

Reister’s widow, Stacey Reister, and her children were present at the sheriff’s office to welcome Reis, the latest addition to the office’s Police Division.

The 2-year-old dark brindle-colored Dutch shepherd was named after Andrew Reister, who died on Aug. 7, 2008, while moonlighting as a bouncer at the Southampton Publick House, after Anthony Oddone of Farmingdale put Reister in a chokehold during a dispute and held on until Reister passed out. Oddone was sentenced to five years in prison in 2014.

Stacey Reister described her husband as a family man who loved his children, hockey, the Yankees and dogs, and always respected his job and the inmates he guarded. Reister said she was "blown away" when the office told her they would name the new K-9 after her husband.

"Even after all this time, people were still thinking about him," said Reister, 52, of Hampton Bays. "I think it’s great because his legacy will continue, and he’ll continue to fight crime through the dog so he’ll be able to help, and it keeps him alive and it keeps him going, which is so important to my kids."

Years after the tragedy, Reister said that her family prefers to think of the ceremony not as a reminder of how her husband died, but rather a celebration of how he lived.

"The defendant in that case does not get that kind of power. We don’t talk about him, we don’t acknowledge him. He doesn’t get my energy. We choose instead to remember who Andrew was and how he lived his life, and try to follow in his footsteps. So we give back, we reach out, we help out, we do the right things, that’s who Andrew was," Reister said.

Later, the sheriff’s office celebrated receiving a donation of a K-9 ballistic vest for Reis from the Simonsen Foundation of Riverhead.

Leanne Simonsen, widow of NYPD Det. Brian Simonsen, who was shot and killed on Feb. 12, 2019, in the line of duty, spoke on behalf of the foundation, calling Andrew Reister "a fallen hero" whom she was glad to honor.

"The more I learn about him, the more I think he and Brian would have been great friends. Another guy doing the right thing when he didn’t have to, and he paid for it with his life," Simonsen said.

Suffolk County Sheriff Errol D. Toulon Jr. said the tribute to Correction Officer Andrew Reister was "very fitting" so the office could "always remember his memory, his dedication and his service to Suffolk County residents."