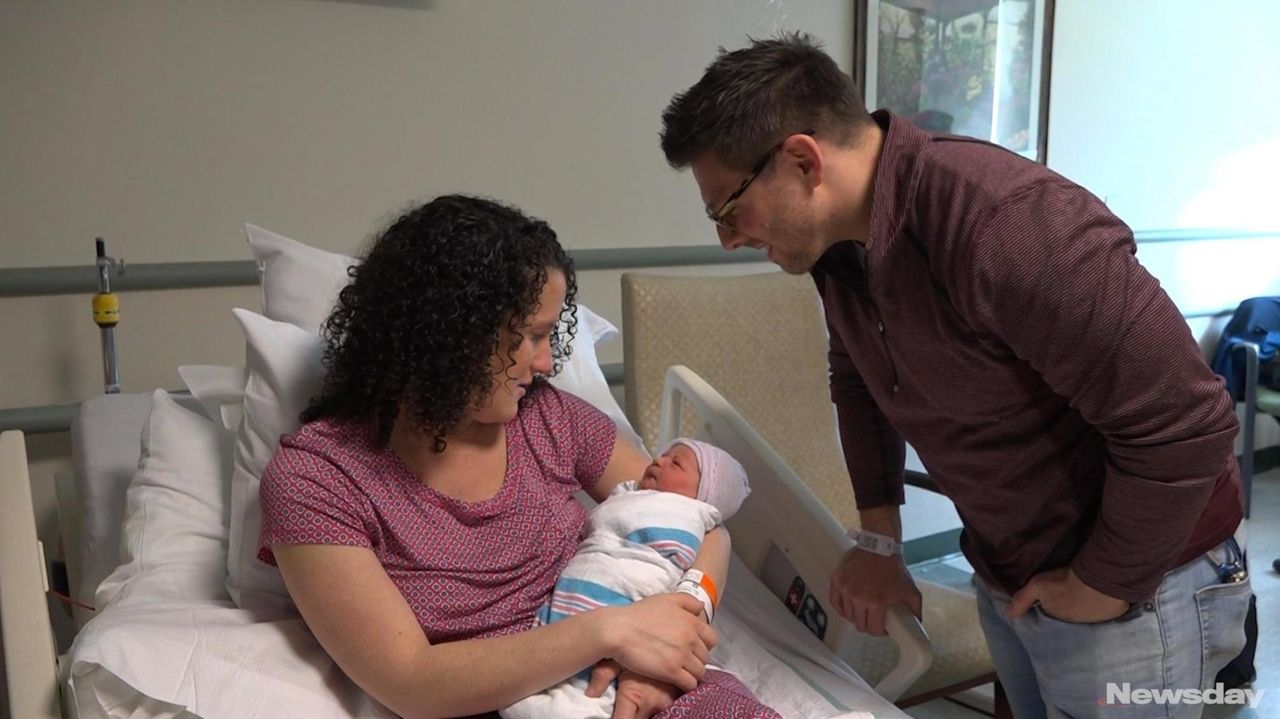 On Tuesday, Feb. 27, 2018, Suffolk County Police Sgt. Pete Scheuerer helped deliver a baby that was being born in a minivan on the shoulder of the LIE, at Exit 51 in Dix Hills. The newborn girl, Charlotte, is the second child for Janine Presley-Livote, 30, and her husband, Edward Livote, 33. Credit: News 12 Long Island

Talk about your rush deliveries. During rush hour no less.

With an assist from a Suffolk cop, a baby girl was delivered inside her parents’ minivan Tuesday evening on the Long Island Expressway in Dix Hills as motorists zoomed past.

Edward Livote, 33, of Hauppauge was taking his wife to NYU Winthrop Hospital in Mineola when Charlotte — already four days past due — suddenly decided she was ready to be born.

Janine Presley-Livote, 31, asked her husband to pull over immediately.

“I threw the flashers on, ran around and opened up the side door. I looked and I am like, ‘Yeah, you’re crowning,’” Edward Livote recalled in an interview Wednesday at Huntington Hospital, where the couple and their second child were recuperating.

The expectant father called 911 shortly after 5:30 p.m. and told dispatcher Jon Hallock that the baby’s head was visible.

“I knew I was giving birth right then,” Presley-Livote said.

Edward Livote lowered his wife’s front passenger seat and pushed it back, then followed the dispatcher’s step-by-step instructions.“I was kind of cradled up front, with my butt on the dashboard and my hands underneath,” Edward Livote said. “And she came out.”

Charlotte was born five minutes after the couple pulled over on the shoulder of the westbound HOV lane near Exit 51.

Livote took off his two shirts and wrapped them around the newborn who was resting on her mother’s chest. He then rolled up the windows and turned up the heat.

Scheuerer was cruising east on the LIE when he heard over the radio that a baby was being born one exit away.

Less than a minute later, Scheuerer’s patrol vehicle, lights flashing and sirens wailing, pulled over across from the minivan.

There was a concrete median barrier between them. As he hopped out of his car, the sergeant questioned for a moment whether he was up to the job physically.

Scheuerer, who said he helped deliver two other babies as an NYPD officer, was up to the task. He hopped into the minivan and went right to work.

Scheuerer was impressed by how well the mom handled the roadside delivery.

“I’ve never seen a mother like this,” the sergeant said. “She was really controlled, calm, talking to me.”