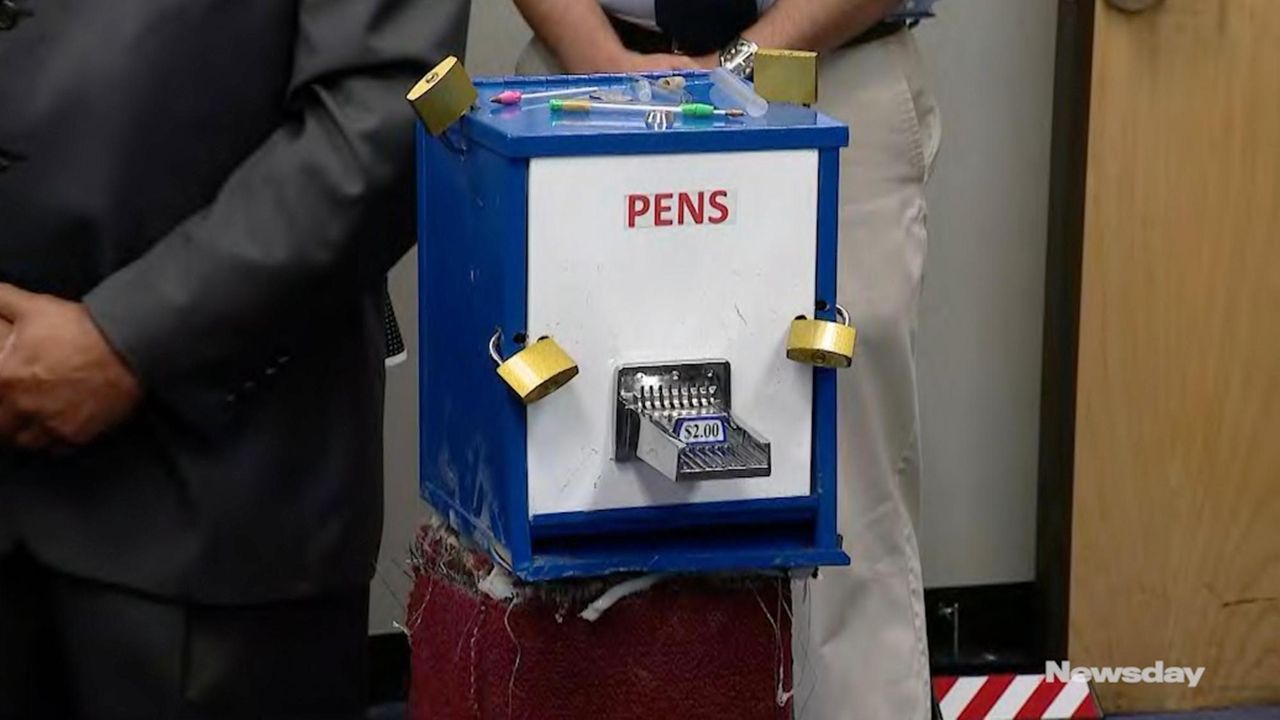 The dispensers were removed from near shopping centers.

Town Supervisor Edward P. Romaine said in a Monday news conference at Town Hall that officials became aware of the dispensers over the weekend through a Facebook post. He said Brookhaven officials immediately investigated.

“We are going to address this and send a strong message,” Romaine said. “We will remove [the dispensers] and turn them over to police to investigate.”

He said he was shocked someone would commit such a bold act, especially one week into the school year.

“You think you’ve heard of everything,” Romaine said.

Suffolk police released a statement saying they were working with Brookhaven town officials to investigate the "circumstances surrounding the installation of three pen dispensers in Coram and Farmingville."

Officials said there was no proof anyone purchased pipes from the machines before they were removed.

During the news conference, Brookhaven Town Councilman Michael Loguercio put eight quarters in one machine in an attempt to release the glass pipe. The money got stuck and remained that way.

Selling a glass pipe and pen isn’t by itself illegal, officials said, but installing the machines without a permit and site plan is a town code violation.

Loguercio called the issue of legality "a fine line, a gray area."

“We believe this promotes drug paraphernalia, which I believe, is a criminal act,” Romaine said. “I don’t know what they [those who installed the devices]" were thinking, but I can imagine what they were doing.”

David Moran, an attorney in Brookhaven’s law department, said, “We believe it to be something more, but we will let law enforcement handle it.”

Police asked anyone with information about the dispensers to call Suffolk County Crime Stoppers at 800-220-TIPS.

With Chau Lam and Robert Brodsky

5 ways to send story tips to Newsday Do you have information that might lead Newsday to an important story, or an investigation? A document that starts us on the trail? Here are five ways for you to send our journalists tips, documents and data with a range of security options.