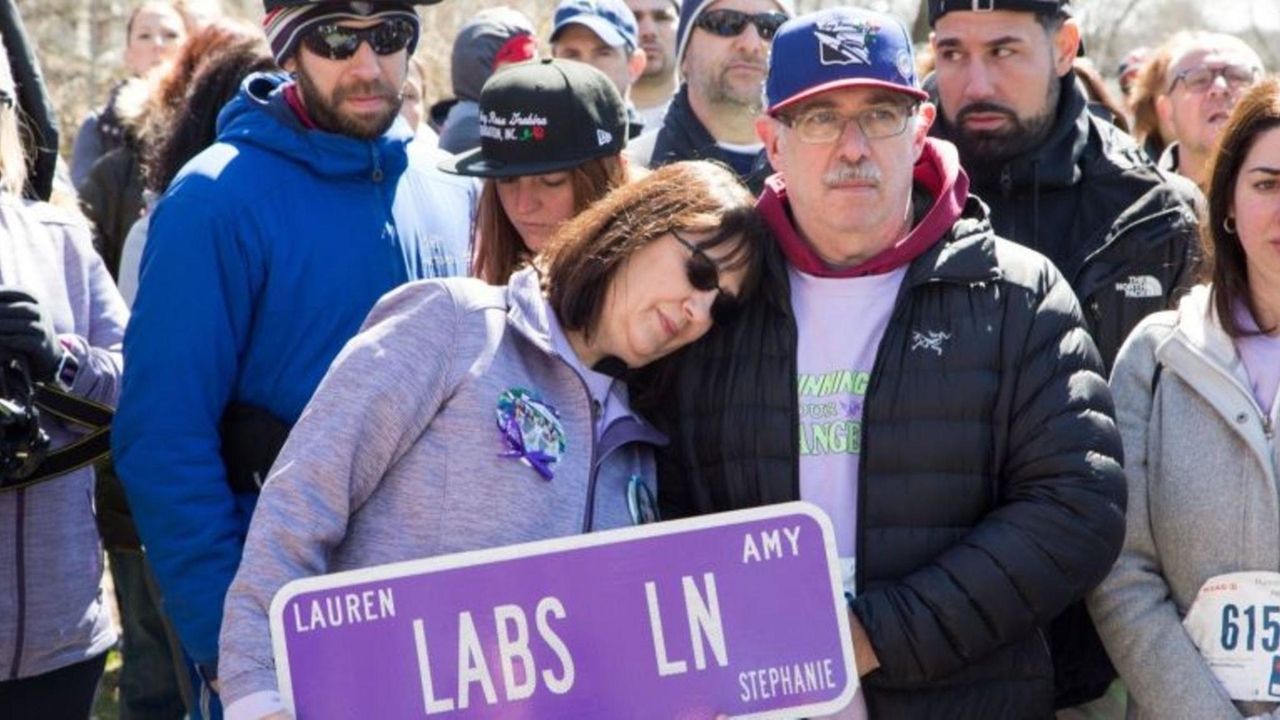 A Smithtown street was rededicated Sunday, April 8, 2018, in memory of four women who were killed in a limo crash in Cutchogue in 2015. Central Road was renamed LABS Lane, an acronym of the first initials of victims Lauren Baruch, 24, of Smithtown; Amy Grabina, 23, of Commack; Brittney Schulman, 23, of Smithtown; and Stephanie Belli, 23, of Kings Park. Credit: Barry Sloan

A Smithtown street was rededicated Sunday in memory of four women after a ceremony at which their families and elected officials called for stricter limousine regulations and installation of a no U-turn sign in Cutchogue, where the victims died in 2015.

Central Road was rededicated LABS Lane — an acronym of the first initials of victims Lauren Baruch, 24, and Brittney Schulman, 23, both of Smithtown, Amy Grabina, 23, of Commack and Stephanie Belli, 23, of Kings Park — after the Running for Our Angels 5K held in their honor.

The rededicated street is home to Smithtown High School West, the alma mater of several of the victims.

The four women and four other friends — Olga Lipets, Melissa Crai, Alicia Arundel and Joelle DiMonte — had hired a limousine driver to chauffeur them on a North Fork winery tour before the July 18, 2015, crash. The driver, Carlos Pino, 58, of Bethpage, was making a U-turn on Route 48 when his vehicle was struck broadside by a pickup truck, authorities said.

Wehrheim noted the irony in that the women were being responsible in hiring a limo service.

“That July day rocked our community to the very core, and it changed the lives of the brave survivors who are here with us today,” he said.

An estimated 700 people participated in the race, with many staying for the unveiling ceremony. Someone cried out “angels” as a cloth was pulled down, revealing the honorary street sign at the corner with Plymouth Boulevard.

Those who spoke during the event mentioned the effort to have Suffolk County install a no U-turn sign or a turning signal at the Cutchogue intersection of Depot Lane and Route 48, the site of the fatal accident. A traffic signal has since been installed at that corner, but the county has not taken those additional measures.

“Hopefully, we can work together and get the changes done so nobody else has to go through this,” said Paul Schulman, Brittney’s father, who has circulated a petition calling for comprehensive training for limo drivers and prohibiting limos from making U-turns.

Charges against Pino were later dismissed and the driver of the pickup truck, Steven Romeo, of Southold, pleaded guilty to driving while impaired, a traffic infraction. Romeo initially was charged with driving while intoxicated, but Suffolk County prosecutors have said he wasn’t over the legal limit and had no way to avoid hitting the limo.

Mourners gather at vigil for 4 killed in limo crashFamily, friends and others in mourning over the deaths of four young women killed in a Cutchogue limousine crash earlier in July remembered them Wednesday night, July 29, 2015 with an emotional candlelight vigil at Smithtown High School West. (Credit: Newsday / Chris Ware) Editorial: Require stretch limos to be saferThe four young women who died in a ghastly collision between a pickup truck and ...