Suffolk County District Attorney Thomas Spota announced Thursday he will leave office as a result of his indictment on federal obstruction of justice charges.

“I will be leaving my post as district attorney at the earliest opportunity after the resolution of normal administrative matters relating to my retirement,” Spota said in a statement released by his office. “The governor will be notified of my decision today. The chief assistant district attorney, Emily Constant, will thereafter assume my duties and responsibilities.”

Spota spokesman Robert Clifford said it was unclear how long it would take for the necessary paperwork to be filled out.

Neither Spota nor Constant were available for comment Thursday. 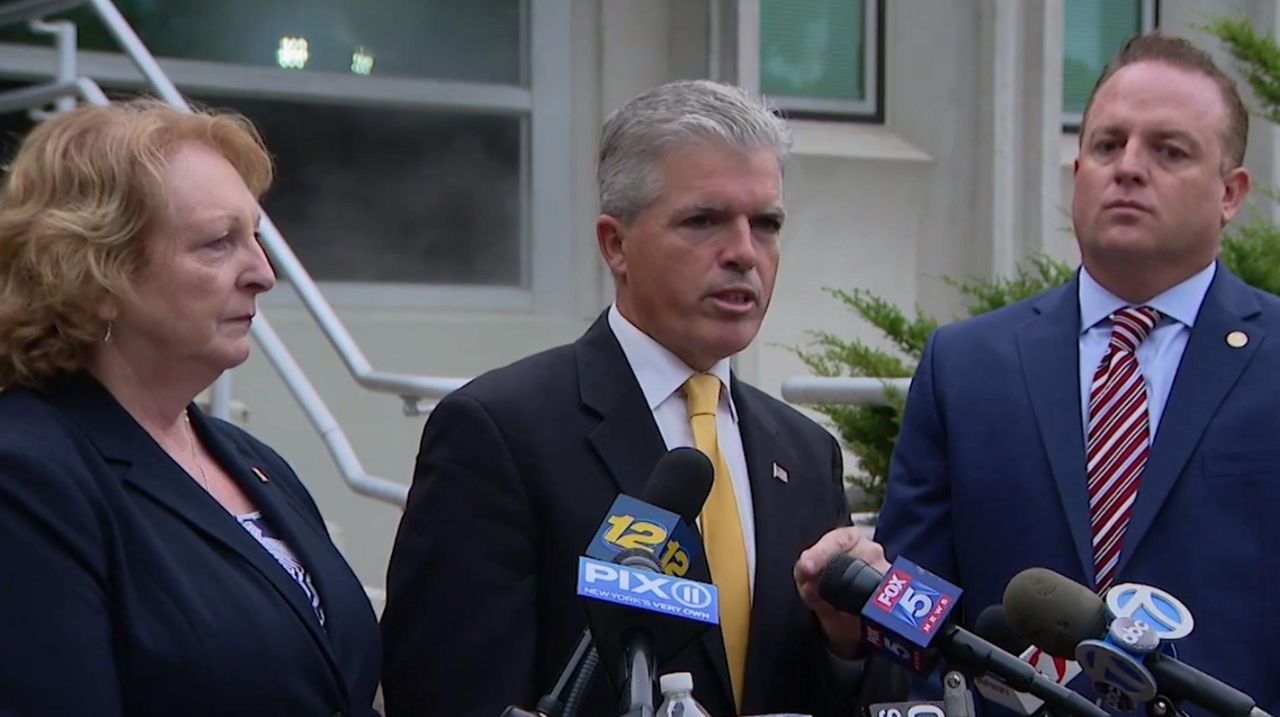 The Spota announcement came less than a day after the district attorney and one of his chief aides, Christopher McPartland, were indicted on federal charges accusing them of taking part in a cover-up of former Suffolk Police Chief James Burke’s assault of Christopher Loeb in 2012. Loeb had been arrested after Burke’s police vehicle had been broken into. Loeb was accused of stealing a duffel bag that contained a gun belt, pornography, sex toys and other items.

On Thursday, Clifford said McPartland, who runs the political corruption unit, was reassigned “to duties unrelated to his former responsibilities.”

Loeb’s attorney, Bruce Barket of Garden City, said Spota’s decision is “hardly surprising. Resigning is clearly appropriate and despite his missteps Tom Spota mostly did the right thing. It is an unfortunate and sad way to end a career.”

Suffolk County Executive Steve Bellone said at a news conference outside the district attorney’s office that Spota should step down immediately.

“That is unacceptable,” Bellone said. “He can deal with retirement issues after he leaves office. Leaving office at some time in the future is not what this moment calls for. Not at this moment in this county’s history.”

A source close to Gov. Andrew M. Cuomo said the governor probably would not appoint a replacement for Spota. Cuomo generally doesn’t appoint a new district attorney in such instances when there is a top assistant prosecutor in the office, the source said, and the election to replace Spota is just two weeks away.

Spota, 76, and McPartland, 51, each faces four counts: conspiracy to tamper with witnesses and obstruct an official proceeding; witness tampering and obstruction of an official proceeding; obstruction of justice; and accessory after the fact to the deprivation of civil rights, according to the indictment. If convicted, they each would face up to 20 years in prison. They pleaded not guilty at their arraignment Wednesday, and they were each released on a $500,000 bond.

Federal prosecutors said in a bail letter that Spota and McPartland “agreed to conceal Burke’s role in the assault and to obstruct and attempt to obstruct the federal investigation in order to protect Burke.”

Federal prosecutors said the two men were accused of “using intimidation threats and corrupt persuasion to pressure . . . witnesses, including co-conspirators not to cooperate with the federal investigation, to provide false information, including false testimony under oath, and to withhold relevant information from” federal investigators.

The charges and decision to leave office abruptly end nearly 16 years in office for Spota, who came into office promising to fight corruption and political prosecution.

U.S. District Court Judge Leonard Wexler, at their arraignment, ordered Spota and McPartland not to have contact with each other without their lawyers present in matters of the indictment, and not to contact any witnesses.

The judge said a third party, agreed to by prosecutors and defense attorneys, has to be involved in any joint regular work at the district attorney’s office by Spota and McPartland.

Those restrictions made it impossible for Spota to stay in office, attorneys said.

“I can’t see how he functions,” said Christopher Brocato, president of the Suffolk Criminal Bar Association. “He can’t talk to his senior staff.”

Brocato said the scandal would taint every criminal trial that starts while Spota remains in office.

“He knew that his ability to administer justice was really compromised,” Brocato said.

“I certainly think it’s the right decision,” said Dan Russo, defense attorney and administrator of the Suffolk assigned counsel defender program. “He probably should have left earlier. It’s done damage to some good people [still in the office], and that’s unfortunate.”

Russo called “for a complete housecleaning, and that means anyone in a supervisory capacity has to go,” meaning all bureau chiefs and deputy chiefs.

He also urged other county agencies, like the medical examiner’s office and the crime laboratory, that hold themselves out as being independent of police and prosecutors to examine whether they truly are not just tools of law enforcement.

J. Stewart Moore of Huntington, president of the Amistad Long Island Black Bar Association, said he was pained by Spota’s departure, because the office had just begun addressing issues of institutional bias.

“The African-American community’s concern is that they lack confidence in the prosecutor’s office overall,” Moore said. “I give credit to Spota for doing something, however late.”

Timothy Sini, the current Suffolk police commissioner and Democratic candidate for district attorney, said Thursday that Spota’s resignation would be “the next positive step in restoring integrity to the district attorney’s office.”

He called McPartland’s reassignment “ridiculous,” adding: “He should be fired immediately.”

Sini’s Republican opponent, Ray Perini, in a statement he posted on Twitter, said, “It is a sound decision for Thomas Spota to resign, but I am deeply saddened that the most powerful law enforcement official is under a federal indictment.”

With Nicole Fuller and Michael Gormley