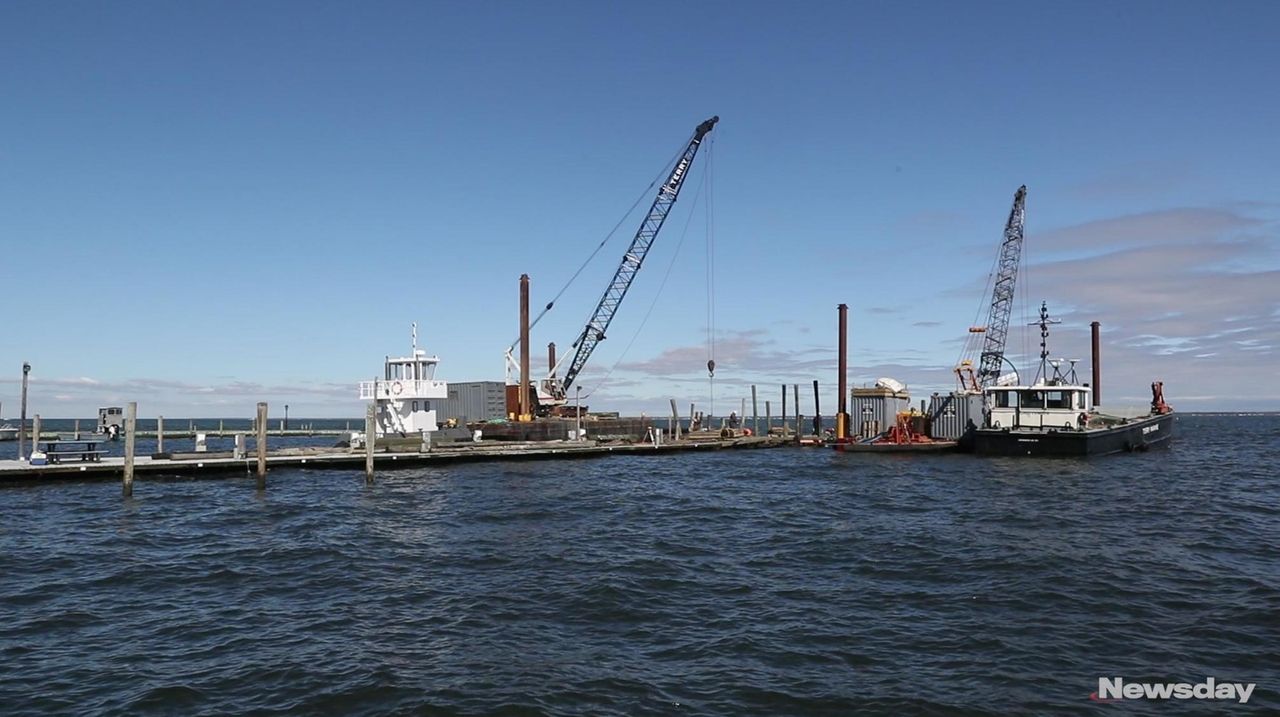 Davis Park marina on Fire Island took heavy damage during a storm in October 2017. On Thursday, Brookhaven Town Councilman Neil Foley provided an update as to the extensive repairs and ugrades that he said should be completed by Memorial Day weekend. Credit: Randee Daddona

Repairs to the Davis Park marina, which was destroyed by an October storm that tore wooden planks from the boardwalk, will be mostly completed in time for the unofficial start of summer on Memorial Day weekend, Brookhaven Town officials said.

Crews worked through an often blustery winter rebuilding the Fire Island summer community’s docks, which were torn apart on Oct. 29 when strong westerly winds pushed water from the Great South Bay into the marina, ripping away parts of the bulkhead.

The ferry dock should be reopened by mid-May, Brookhaven Parks Commissioner Ed Morris said, adding that ferries have been docking at another part of the marina since the damage occurred. Repairs to a second boat landing known as the “tower” dock should be completed later this year, he said.

Summer residents also will find new boardwalk planks, and restored lighting and electrical systems when they return in a few weeks to Davis Park, which draws thousands of visitors each summer.

The October storm devastated the marina and eroded sand from a nearby beach. Town officials said the damage was worse than that caused by superstorm Sandy on the same day in 2012.

Brookhaven officials last fall approved nearly $3 million for repairs by town crews and a contractor. The work was delayed in late December and early January when the bay froze, making it difficult for crews to get to Fire Island.

Workers also were hampered by a succession of four March nor’easters, although those storms caused no additional damage to the marina, Morris said. Relatively mild weather in February aided repair work, he said.

“They’ve had every curveball they could have thrown at them,” town Councilman Neil Foley said. “It’s never, never, easy on Fire Island.”

“That’s the only way we’re going to avoid this in the future,” he said of the storm damage. “Davis Park is so exposed that every time there’s a westerly storm, it gets destroyed.”

Jayne Robinson, president of the Davis Park Association, which represents residents, said she hopes repairs are completed in time for her family and others to enjoy what she calls “probably my favorite home.”

“My children, my grandchildren, all grew up there,” said Robinson, 71, a lawyer and Manhasset resident whose husband Neil is a Davis Park fire captain and commissioner.

“It was one of the first places I ever went with my husband,” she said. “It means everything. ... I’d give up my regular residence for my Fire Island home.”

The hamlet of Davis Park

Founded: 1945 when the Davis family donated land on Fire Island to Brookhaven Town.

Homes: About 220 with an additional 130 homes in neighboring Ocean Ridge.

Shipwreck: The Gluckauf, a German steamer that ran aground off Fire Island in 1892 or 1893, can be seen in the Atlantic Ocean waters off Davis Park at low tide.