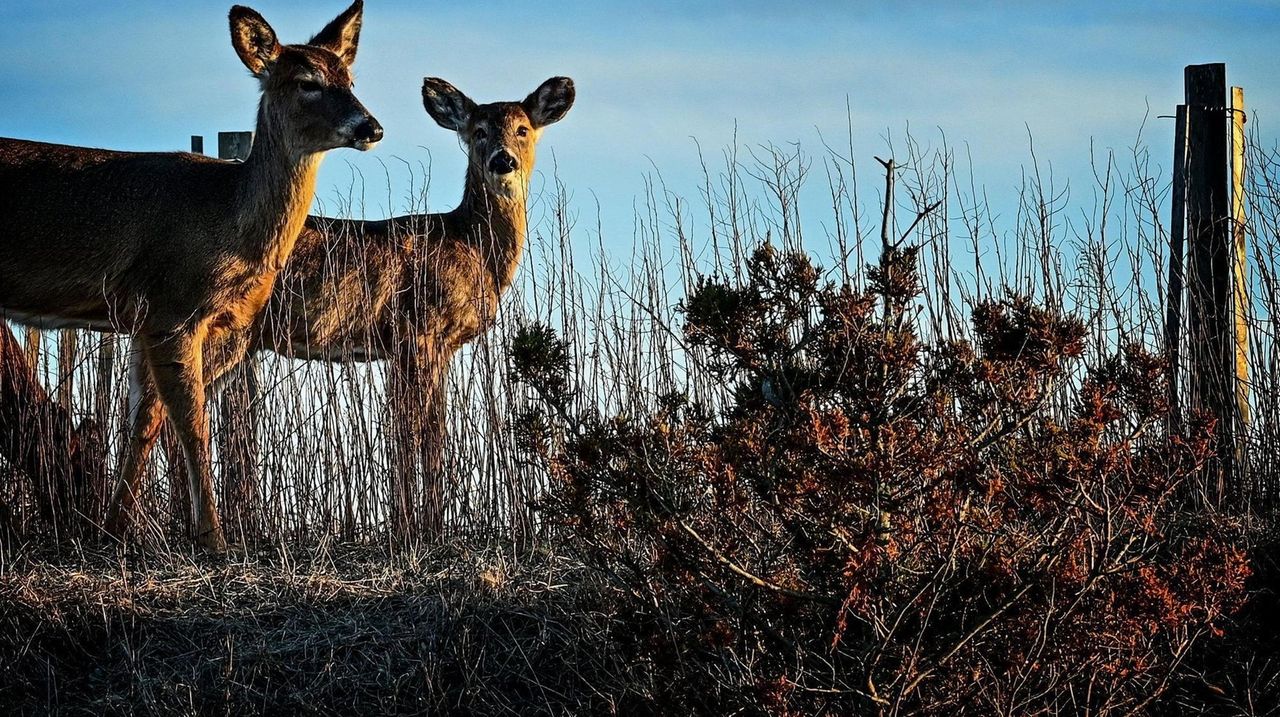 A new study done by AAA Northeast showed that New York drivers are crashing into more animals from dusk to dawn, most often deer. In 2019, Suffolk County had the third-highest number of crashes. Newsday's Steve Langford has the story. Credit: Newsday / John Conrad Williams Jr., Jeffrey Basinger, Thomas A. Ferrara

New York drivers are crashing into more animals from dusk to dawn — most often deer — at the rate of about one every quarter hour, AAA Northeast said Tuesday.

For years, Long Islanders have relied on various measures — from culls to birth control — to keep deer from becoming nuisances or endangering drivers when they dash across roads, starting as night falls, and come out to forage. Autumn and winter, with their short days, ice and snow and summer fawns, which have become inexperienced adults, usually are the more perilous seasons.

Without natural predators, deer herds have flourished in some areas, including Fire Island and the William Floyd Estate in Mastic Beach where the National Park Service last year deployed hunters to slash their numbers.

The number of crashes involving animals around the state rose 10% last year to 36,445 from the year before, the nonprofit motor club’s analysis found.

The human toll was substantial: 1,778 people inside the vehicles were injured and 12 died.

While Institute for Traffic Safety Management and Research statistics do not reveal what kind of animal was hit, AAA Northeast said, information amassed by New York and other states from previous years showed deer were involved in 88% to 98% of crashes.

"Striking a deer can be extremely dangerous, with the animal possibly going through the windshield, seriously injuring or killing the driver and passengers," Robert Sinclair Jr., spokesman for AAA Northeast, said by email.

Nearly half of new vehicles come with systems designed to detect hazards and avoid them. However, not all of these systems are equally adept at detecting animals, critics say.

Joe Young, a spokesman for the Insurance Institute for Highway Safety, a nonprofit research group based in Ruckersville, Virginia, said by email it had no data on whether crash avoidance systems prevent crashing into animals.

Opinions are at best mixed about the effectiveness of sonar devices or high-pitched whistles mounted on vehicles.

Said Young: "Deer whistles are not effective at preventing crashes with wildlife."

To prevent collisions, AAA Northeast recommends anyone driving from twilight to daylight stay within the speed limits, scan the shoulders ahead to see if any deer are waiting to cross and of course if they do, brake — but not so powerfully that the driver loses control.

And do not swerve.

Experts agree that steering straight will give a deer or another kind of animal a chance to escape on its own.

They are too unpredictable for motorists to know which way they might flee — and turning the wheel too violently can land a driver in the ditch. Drivers must be particularly cautious near woods or fields.

Some experts urge blowing the horn for 10 or more seconds and if possible, on a straight stretch, turning off the headlights for a few seconds. Those two steps can unfreeze animals — and even pedestrians and bicyclists who also are blinded by the glare and too dazed to move to safety.

The top 10 New York counties for animal crashes in 2019 were: