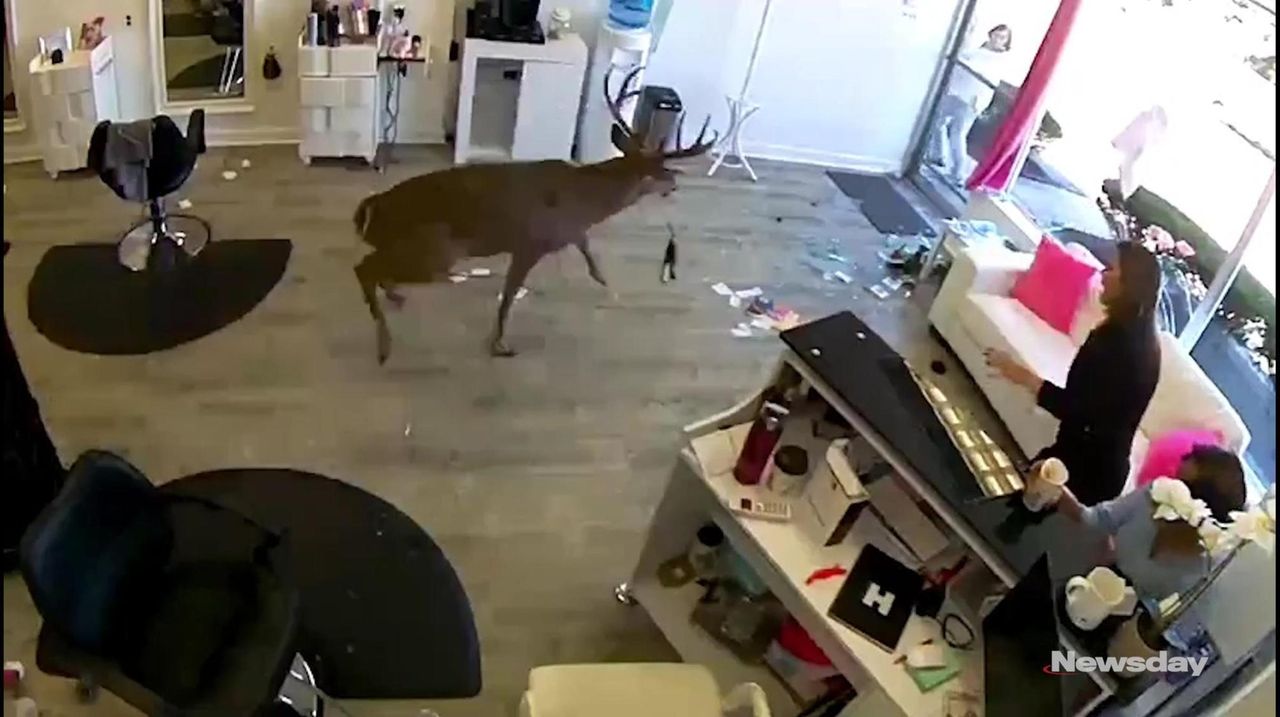 A deer crashed through a window at Be.you.tiful Hair Salon on Portion Road in Lake Ronkonkoma on Saturday. Credit: News 12 Long Island

A deer with a large set of antlers crashed through the front window of a Lake Ronkonkoma hair salon Saturday, hitting a woman on a couch and sending shards of glass flying before it banged its way around the room, according to police and witnesses.

"At first I thought it was a car — because of all the crashing," said hair stylist and owner Jeni Heredia. "It was scary."

The deer jumped through the big window of Be.you.tiful hair salon at 344 Portion Rd. around 12:30 p.m., police said.

The buck struck the woman sitting on a sofa in the front of the salon, injuring her head and leg, police said. She was taken to Stony Brook University Hospital with non-life-threatening injuries.

Heredia said she was snipping a man's hair when the buck barged in, drawing screams from the people inside.

"It threw its head up against the wall three or four times, and ran into the break room," she said. "It was bleeding. There was blood."

Video shows the man and two women scrambling away from the animal. It rammed into a big mirror nearly knocking it off the wall, she said.

"It was huge" and had large antlers, Heredia said. "It must have been the leader of the pack."

People inside the salon started shrieking again when the deer started to charge its way out of the salon.

"It ran toward me," Heredia said. "It bolted out the front door."

She said the deer rammed its head into the glass front door, swinging it open as it sped away. It didn't break the glass but a hinge on the top of the door broke as the buck ran off with a hair straightener in tow.

Heredia says it's not uncommon to see deer in the area, since some woods are nearby.

"Maybe it thought it was running into the woods," she said.

Police said the deer had fled the scene by the time officers arrived.

2:15
For dad with new heart, the Father's Day gift is just being here
2:01
LI seniors, cut off amid COVID-19, are back on the road to normalcy
Nassau Hub project could start by March
1:54
Nassau Police Commissioner Ryder says he won't resign
1:55
Some Hispanic leaders voice support for Nassau's top cop
State starting to shut down some mass vaccination sites
Didn’t find what you were looking for?