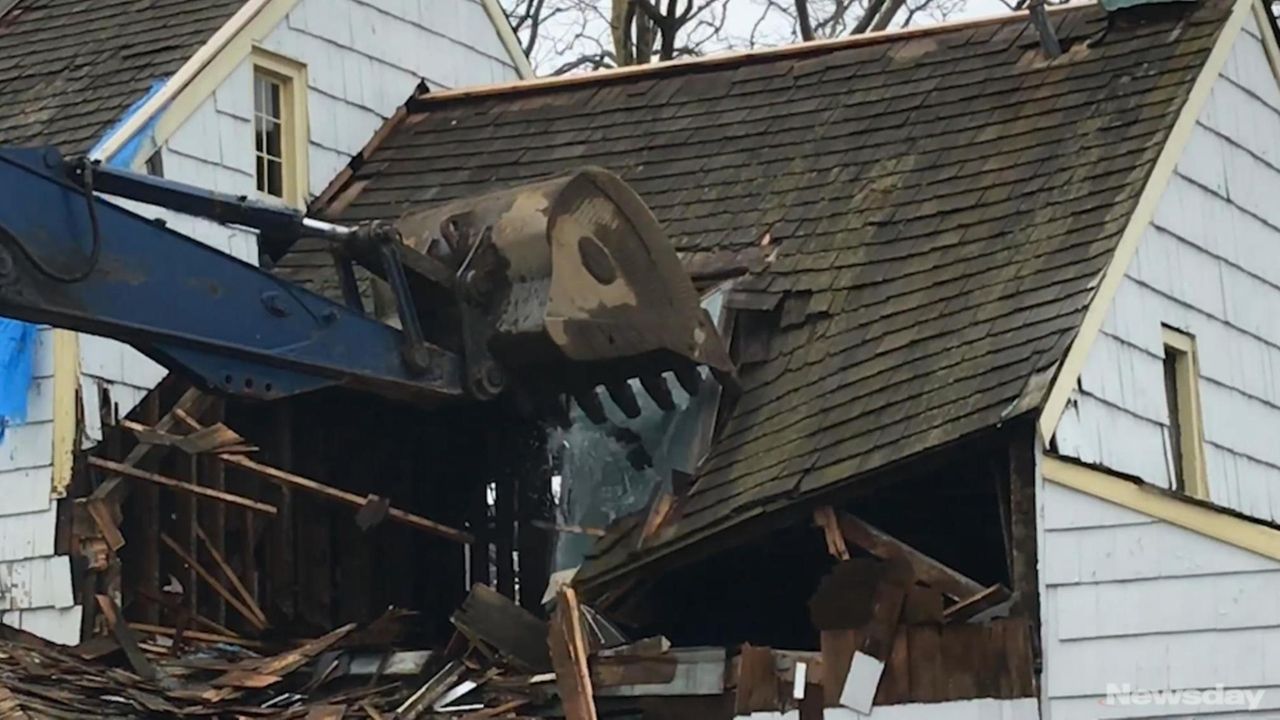 A developer began demolishing the first of two 19th-century buildings slated for redevelopment on Main Street in Babylon Village Wednesday despite calls from community members to preserve them.  Credit: Newsday / Jesse Coburn

A developer demolished the first of two 19th-century buildings Wednesday on a property slated for redevelopment in Babylon Village, despite calls from community members to preserve them.

At noon, an excavator tore into the rear clapboard wall of the Selah Smith Carll House, which has stood on Main Street since 1826. The developer, Ken Rogers of Babylon-based Rogers Development Corp., also has a demolition permit for the neighboring South Side Signal Building (circa 1869), village records show. The permit does not specify a date for razing the building, but it expires in July.

In their place, Rogers plans to build a two-story brick building with retail spaces on the ground floor, apartments above and parking in the rear, according to plans submitted in January to the village.

The loss of the structures and others like them in Babylon in recent years has sparked concern among some residents that the village risks losing its historic character.

“They are tangible evidence of the life of the village for two centuries,” said Darrel Blaine Ford, 88, a Babylon resident since 1954 who came to watch the demolition. “I’m heartbroken.”

Rogers did not respond to requests for comment. His proposal still requires density, setback and use variances from the village zoning board of appeals, planning board chairman James Slack said.

In a statement posted Tuesday on the village’s Facebook page, Mayor Ralph Scordino said negotiations with Rogers to preserve the structures were unsuccessful.

“We did our best to save the buildings,” he wrote. But “the property owner has the right to do as they deem fit with their property within the current codes.”

In January, North Babylon resident James Muller submitted a petition to the village government containing more than 1,000 signatures that requested the village adopt a historic code prohibiting the demolition or significant alteration of buildings built before 1912. Muller said he received no response from village officials beyond an acknowledgment of receipt.

At least 36 homes of potential historic significance in the village have been demolished since 1980, according to Babylon Town historian Mary Cascone. Two dating to the 18th century were torn down last year.

The Carll House was built by a family whose roots in the area date to the Colonial era, Cascone said. The South Side Signal Building housed a weekly newspaper that covered local news out of the shingled, two-story structure from 1869 to 1914, she added.

The buildings became dilapidated in recent years. A 2016 letter from the village building inspector said the Signal Building was “unsafe and structurally dangerous.”