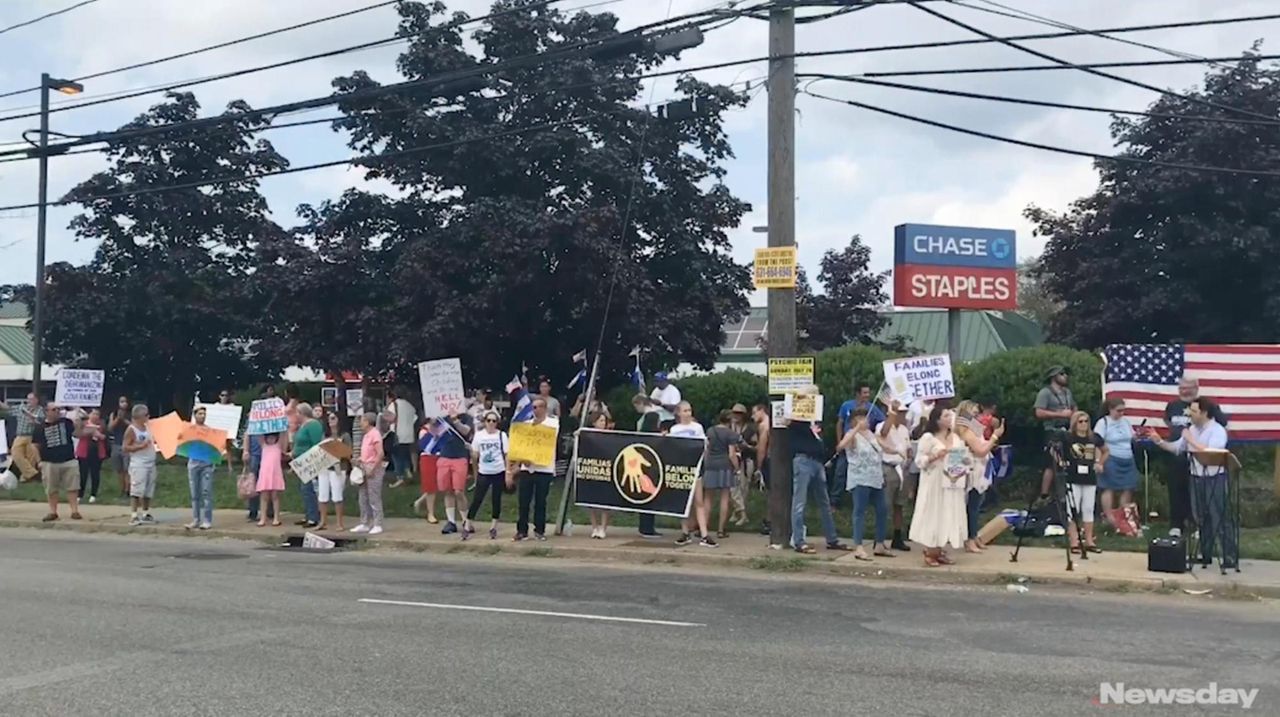 Hundreds of Long Islanders rallied on Saturday, June 28, 2018, in Huntington to protest the separation of children from their families at the U.S.-Mexico border. Credit: Newsday / Christine Chung

Days after the government missed the court-ordered deadline to reunite families separated at the U.S.-Mexico border, hundreds of Long Islanders rallied for family reunification on Saturday.

They stood in the scorching heat in Huntington Station with signs bearing such slogans as “We are all one family” and “Silence = Complicity,” encouraged by cheering and enthusiastic honking from passing cars at the intersection of Route 110 and Jericho Turnpike.

Dr. Eve Krief, a co-host of the rally, said this was the third demonstration her community advocacy group, Long Island Inclusive Communities Against Hate, had held in the past two months.

“We don’t want this to get brushed under the rug . . . This supersedes all of the other issues we [Americans] are upset about right now,” said Krief, 49, a pediatrician from Centerport. “This is about children, this is about humanity.”

Over the past several months, more than 2,500 children have been separated from their families under President Donald Trump’s zero tolerance immigration policy to criminally prosecute anyone caught illegally crossing the border.

According to a U.S. Justice Department court filing, 1,442 children age 5 and older have been reunified with their parents. Nearly 400 children were released to other sponsors such as friends or extended family members. More than 700 children remain apart from their parents, many of whom were deported and deemed ineligible for reunification.

Rosa Moya, 44, of Huntington, said it was important to remember that most of these migrants crossed the border illegally because they were fleeing violence.

“These are immigrants that come here because they want a better future for their kids,” Moya said. “There are many countries where they are not safe.”

Demonstrators said they also were concerned about the trauma these children were experiencing, some of whom have gone months without any contact with their parents.

Charlotte Koons, 84, of Northport, said what these families were undergoing was “cruel and inhumane.”

“This leaves an indelible mark on the child and parent,” Koons said. “It just breaks my heart.”

Harold Fernandez, 52, of Huntington, recounted his own experiences traveling from Colombia at the age of 13, a two-week-long trip that involved crossing the border illegally. He said he was terrified and that the only uplifting thought was rejoining his parents after a four-year separation.

He was 9 years old when they left him and his brother in the care of his grandparents, telling him they were seeking a better life. He remembers not being able to understand this at the time.

“They went for all the reasons all immigrants come to America — to look for dignity, the American dream,” said Fernandez, a cardiothoracic surgeon at Southside Hospital in Bay Shore. “Not to be part of MS-13 or do bad things.”

The experience these families are undergoing is one that will affect them not just now, but for the rest of their lives, he said.

Trump admin. summons immigrant infants to courtThese are children who need frequent touching and bonding with a parent and naps every few hours, and some were of breast-feeding age, medical experts say. Immigrant children ordered to appear in court aloneSteve Lee, a UCLA child psychology professor, said expecting the children to advocate for themselves in court is an "incredibly misaligned expectation." Latest news: Trump presidencyGet complete coverage of U.S. politics, including the 45th president, his administration and Congress.