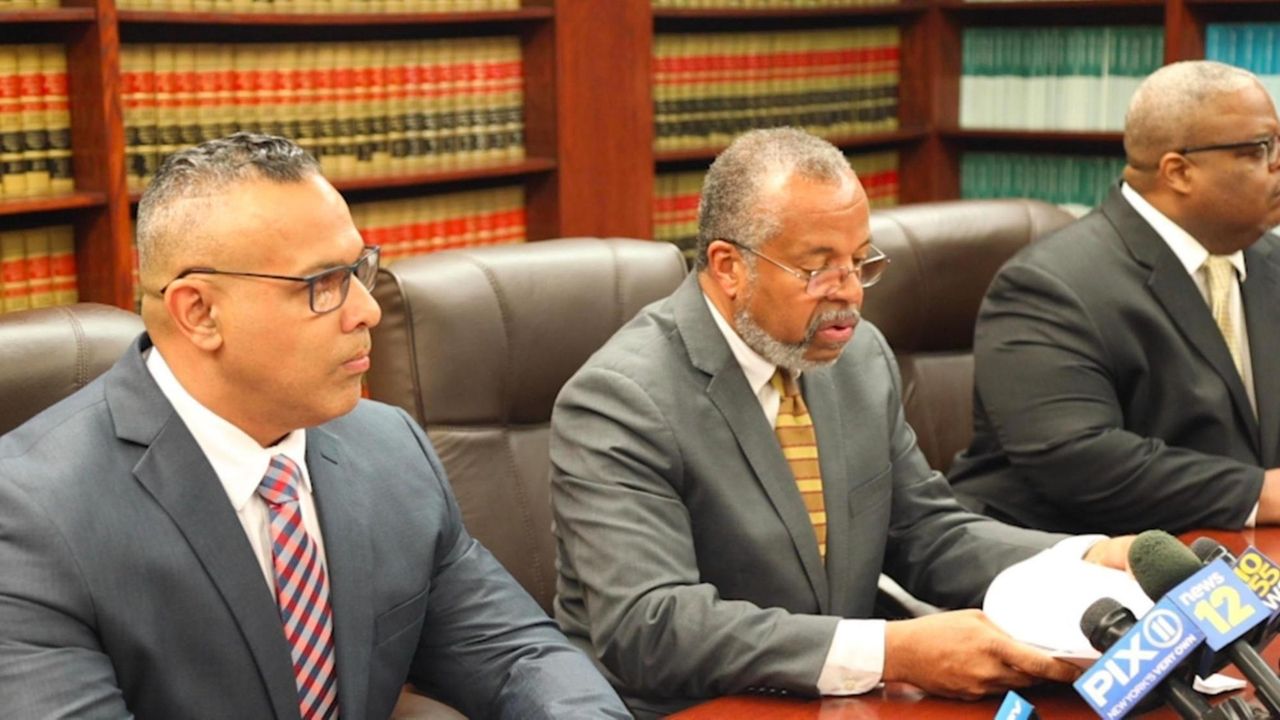 A Suffolk County police detective has filed a multimillion-dollar lawsuit against the police department, the county, and others, alleging he was discriminated against because of his Dominican heritage after he applied for promotions that went to white applicants. Cecilia Dowd reports.    Credit: Kendall Rodriguez; Newsday file footage

A Suffolk police detective has filed a $35 million federal civil rights lawsuit against the county and police department alleging he was discriminated against because of his Dominican heritage after he applied for promotions that went to white men.

Det. Sgt. Tulio Serrata, a 23-year department veteran, says he was retaliated against when he spoke publicly about being passed over for a position in the Suffolk County District Attorney's office that went to Salvatore Gigante, the nephew of then-Chief of Detectives Gerard Gigante. Serrata named Gerard Gigante, former Suffolk Police Commissioner Geraldine Hart and Lt. Michael A. Crowley as defendants in the suit.

"All I asked for is to be given an equal chance to fill positions for which I am more than qualified, only to be slapped down and watch lesser qualified white members of the department step right over me," Serrata told reporters.

"When I testified before the legislature about me being denied one of the highest-paying detective sergeant jobs in the whole department, I did so hoping that a change would come. It did not. And instead, I was made to suffer," Serrata said Thursday.

The suit claims he was met with "unresponsiveness, insensitivity, continued employment discrimination and retaliation" following his testimony.

"The Suffolk County Police Department must stop its wrongful and divisive ways," said Serrata, who became tearful as he spoke during a Thursday afternoon news conference at his attorney’s office. "If I remain silent nothing will change. The Suffolk County Police Department cannot discriminate and retaliate. It has to stop and that time should be now."

Serrata’s attorney Frederick K. Brewington called on the state attorney general and for the U.S. Justice Department to investigate the alleged discrimination. "There must be some accountability," Brewington said.

The Suffolk Police Department issued a statement saying, "The department does not comment on pending litigation."

Serrata, who is president of the department's Suffolk Hispanic Society, said he was passed over five different times for promotions to commands that are highly sought after because of the ability to earn overtime.

The positions he applied for were awarded to Ron Leli and Joseph Isnardi, of Homicide; Sean Hanley and Greg Schlere of Narcotics; and Salvatore Gigante, of the District Attorney's Office, according to the suit.

The lawsuit called Serrata's unsuccessful attempts at promotions "humiliating and embarrassing when the entire police department is aware that Mr. Serrata is the better performing officer and has not been selected for promotion because he is Latino and not Caucasian."

Serrata said when he sought assistance from his union representative James Gruenfelder, president of the Suffolk Superior Officers Association, he was referred to union attorney Paul Linzer, who told him he had no basis for a complaint because he was not fired from his position or disciplined after testifying in front of the legislature.

Hart could not be reached for comment on Thursday. Gigante issued a prepared statement.

"The Suffolk County Police Department has strived to diversify whenever possible in order to more closely represent the community," the statement read. "During my tenure the Detective Division has been the most diversified Division within the Department. As often is the case with individual lawsuits, the specific facts and not accusations will determine the outcome."