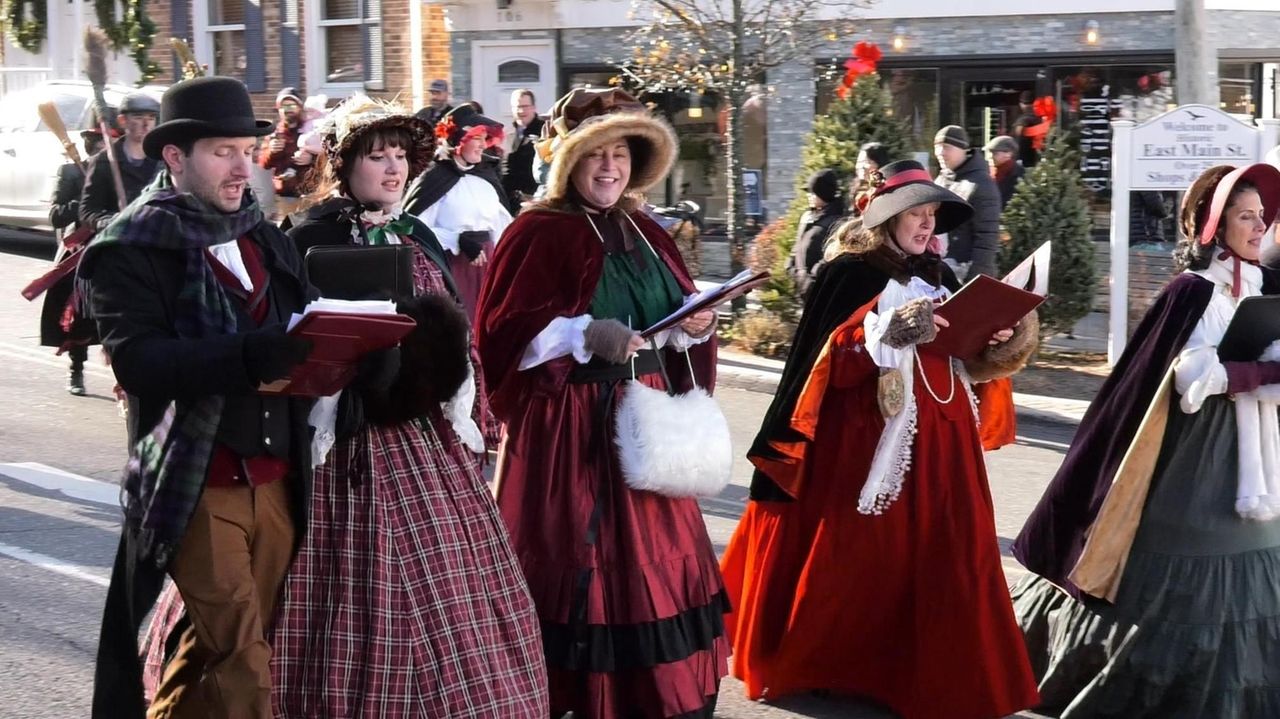 At the festival, sidewalks were filled with characters from the era of author Charles Dickens, including Ebenezer Scrooge, and the Ghost of Christmas future. Credit: Newsday / John Paraskevas

Christmas came early in Port Jefferson on Saturday as hundreds of people gathered in the village to toast marshmallows, dress as Victorian-era carolers, attend plays and enjoy the other festivities at the 24th annual Dickens Festival.

The two-day festival, which ends Sunday, saw the village sidewalks filled with characters from the era of 19th-century author Charles Dickens, including Father Christmas, Ebenezer Scrooge, the Ghost of Christmas Yet to Come, the town crier and chimney sweeps.

Port Jefferson Mayor Margot Garant, who dressed as Dickens and presided over the opening festivities, said the festival has become an important tradition in the village over the last few years.

“Shopping locally is extremely important to us … so we make our village into a historic backdrop and everyone opens up their doors and we get everyone into the holiday season,” she said.

Among the new additions were Mrs. Cratchit's Holiday Cookies & Crafts festival on Thompson Street, and an online contest where people could submit their selfies with Dickens characters.

The selfie contest, Garant said, was the village’s way of “bringing the old into the new and keep our kids connected. It’s all good fun.”

A variety of other activities were available for festivalgoers, including a parade, ice skating at the Village Center, magic shows by The Great Wizard of the North, a cappella performances by choirs and harmony groups, performances of “The Nutcracker,” and free toasted marshmallows near a fire.

Jeanne Garant, Margot Garant’s mother and a former village mayor, was credited by volunteers as starting the annual tradition back in 1995.

“Downtown became dead [during the winter], and I thought to myself ‘What can I do to get our merchants to stay open and light the windows and decorate?’ ” said Jeanne Garant, who ultimately drew inspiration from her favorite author, Charles Dickens, to start a themed festival around his famous story, “A Christmas Carol.” “People started coming out and now, we have a whopper of a holiday. And it’s grown better and better every year.”

Ottilie Philbrick, 13, of Port Jefferson, was among 24 children from Setauket-based dance school Shine Dance Company who gave a Rockettes-style performance on Main Street.

Philbrick said she loved dancing at the festival every year. “Some people who don’t dance will see us, and they’ll be really happy and it makes them want to dance. It makes them feel inspired,” Philbrick said.

Christopher Bauman, 56, and his fiancée Robin Gillman, 53, both of East Islip, have attended the festival for years. Bauman dressed in a gray tuxedo and top hat while Gillman wore a cherry red dress and bonnet while handing out little stuffed white snowmen to children.

“We started coming to the Dickens festival and we decided if we’re going to come every year, we’re going to start dressing up and be a part of it,” said Bauman, who said the best part of his day was seeing the way children lit up when they were given the toys. “It’s worth a million dollars to see their smile. It really is.”