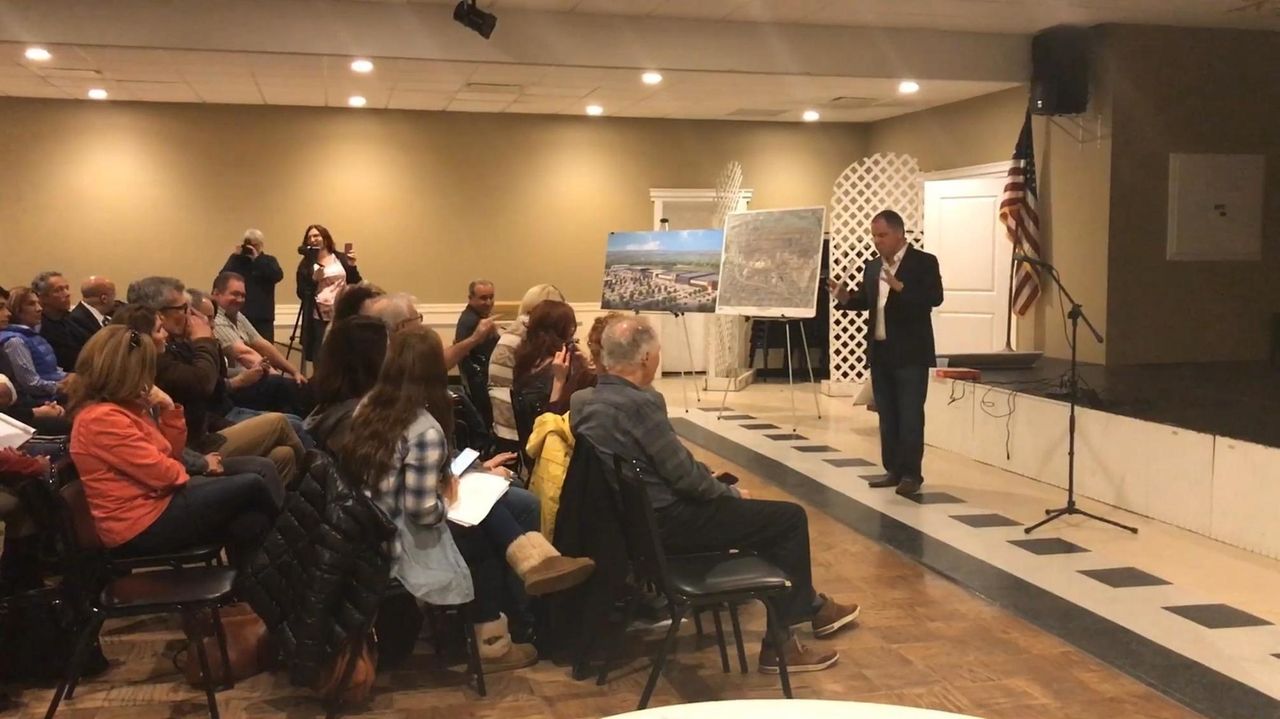 Residents speak out at a community meeting about the proposed Villadom shopping center in Elwood. The meeting was held Wednesday at the Moose Lodge in Greenlawn. Credit: Newsday / Deborah S. Morris

A plan to transform land along Jericho Turnpike on the Elwood-Dix Hills border into a 486,380-square-foot commercial center drew more than 100 residents to a heated community meeting Wednesday night.

The Huntington town board set a May 17 public hearing to consider changing the town’s comprehensive plan to accommodate the $80-million project, known as Villadom, that has divided residents and civic groups.

The center — between Manor Road and Warner Road in Elwood on property leased by Villadom for 99 years — would include a combined 245,500 square feet of office space and fitness center, and 240,880 square feet of retail and commercial space on 49.28 acres of the overall site.

Residents crowded into the Moose Lodge in Greenlawn at Wednesday’s meeting hosted by The Greater Huntington Civic Group and civic group Huntington Matters, both of which support the project, to hear details of the plan from experts hired by the developer, Great Neck-based Villadom.

Many in the audience were angry that the civic groups have publically stated the community supports the project — something they said is not true. Attendees were further angered that the promised panel of experts didn’t show up and Villadom Corp. president Kris Torkan, who said he stepped in at the last minute, couldn’t answer many of the questions.

“I did not want to get into a hostile debate with anyone,” Torkan said. “I wanted to hear their concerns and respond in a clear fashion with accurate information.”

South Huntington resident Jim Jenkins said residents’ anger was understandable after not getting answers to their queries, including questions about traffic and the potential for water contamination. He said town officials should listen to residents and stick to the comprehensive plan.

“It’s the covenant the town has with residents,” Jenkins said of the plan. “The property is zoned for residential; the fact that they are considering changing one-acre housing zoning to heavy commercial for the first time ever is kind of an outrage.”

Other residents opposed to the proposal said it would be devastating environmentally with the location atop an aquifer — and create traffic congestion. A petition collected more than 4,000 signatures opposing the plan.

Torkan has promised community benefits such as a new library, tax revenues to the Elwood school district, town, and county, and the creation of new jobs. He said he and his team will review video of the meeting to address all of the concerns and get back to the community.

The development is to be constructed as six separate structures with five small buildings along Jericho Turnpike and the sixth structure housing the majority of the commercial spaces parallel to Jericho Turnpike near the rear of the developed area.