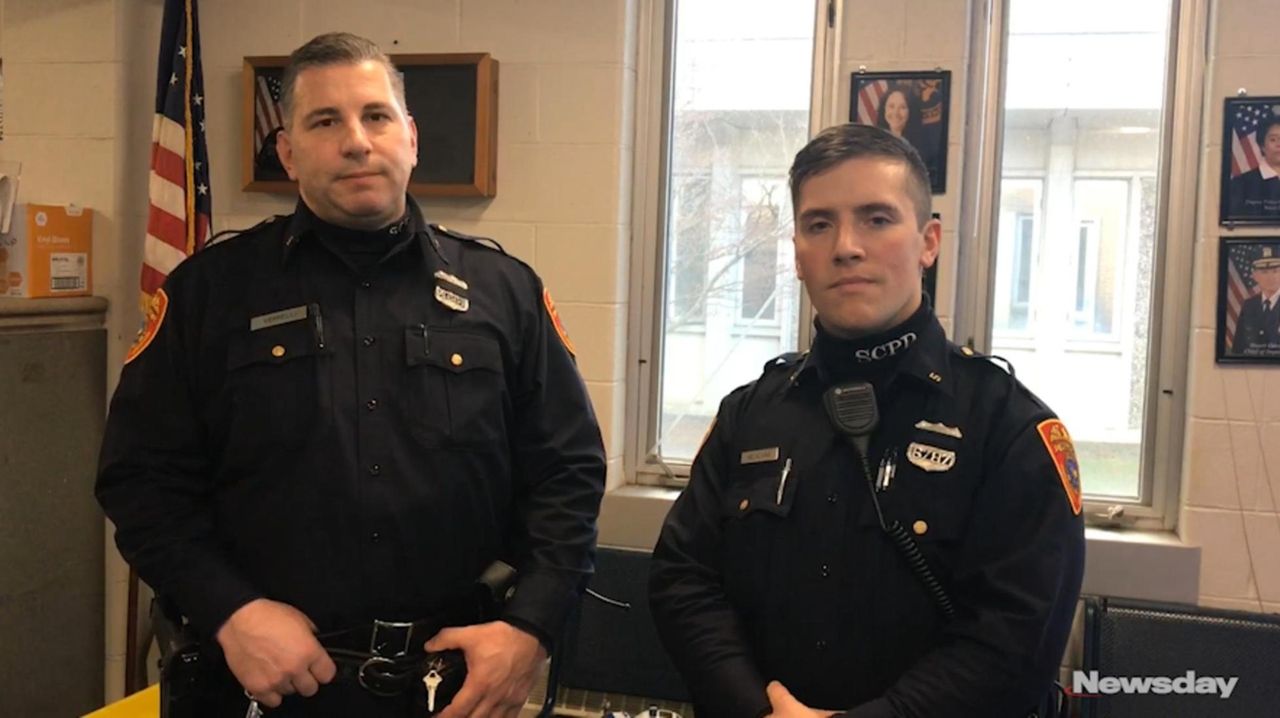 A dog named Wilbur, missing for more than 12 hours, was rescued Saturday morning by two Good Samaritans — with an assist from two Suffolk County police officers — after he was found clinging to floating debris in the Great South Bay in West Sayville, authorities said.

His owner, Stan Bildzukewicz, 57, said he was elated to have the 10-year-old hound mix back home.

"He's a very loving dog. He's the most excited dog when I come home from work or if I'm even gone for 10 minutes," Bildzukewicz said in a phone interview Saturday afternoon.

Wilbur went missing around 7 p.m. Friday — he likely left through an accidentally open backyard gate — and Bildzukewicz spent three hours searching for him, fearing the worst. He barely slept all night.

"It's like you're accepting the fact that he died," Bildzukewicz said.

He planned to try searching for Wilbur again Saturday morning but instead got a phone call that his dog had been found. Wilbur's rescuers were able to track Bildzukewicz down through his collar tag.

Good Samaritan Ary McCarthy had spotted Wilbur struggling in the water — around the block from Bildzukewicz's home — and called 911 around 8:15 a.m.

"It was shaking. It was so cold and it just couldn’t get itself up," Higbie said. "And it just kept barking and barking."

Higbie told News 12 they used a rope to help bring the dog toward the West Avenue dock.

"He was too heavy for the one person at the time to get him out," Officer Ryan McAdam said in an interview at the Fifth Precinct on Saturday afternoon.

As McAdam and Officer David Verrelli rushed to the bay, McCarthy and Higbie leaned over the dock to scoop up the 55-pound dog.

"They had literally just pulled him out" when the officers arrived, McAdam said. "It looked like they were almost hugging and you could see the fur between them."

McAdam, 27, grabbed his police-issued jacket from his vehicle and wrapped a shivering Wilbur in it.

"From firsthand experience, those jackets are very, very warm," he said.

"Without the actions of the two women, Wilbur would have passed away from hypothermia or drowned," Verrelli said. "He was freezing and shaking."

The officers said they were thinking of their own pets in the aftermath of the rescue — McAdam's plott hound, Noelle, and Verrelli's German Shepherd, Valerie, who died in November. They said they were glad to see a happy ending for the 911 call.

"It's nice when total strangers get together," McAdam said. "In this day and age, dogs are one of the few things everyone can agree on."

Wilbur was taken to Grady Animal Hospital in Sayville, where veterinarians told Bildzukewicz he'd make a full recovery. Wilbur, whom Bildzukewicz adopted two years ago, came home around 3 p.m. and rejoined his owner's collies, Sadie and Blue, for a dinner of diner leftovers — an open-faced roast beef sandwich.

"He doesn't like the water," Bildzukewicz said. "I'm surprised he was in it."

Group seeks more recreation space in towns for Hauppauge residents
An homage in Holbrook to Gabby Petito's zest for life
Autopsy: Actor Michael K. Williams died of drug intoxication
CDC director: Booster shots were expanded 'to stay ahead of the virus'
Tunnel to Towers 5K kicks off in Brooklyn
1:34
Nine WWII heroes, ready to soar, share their stories of service
Didn’t find what you were looking for?