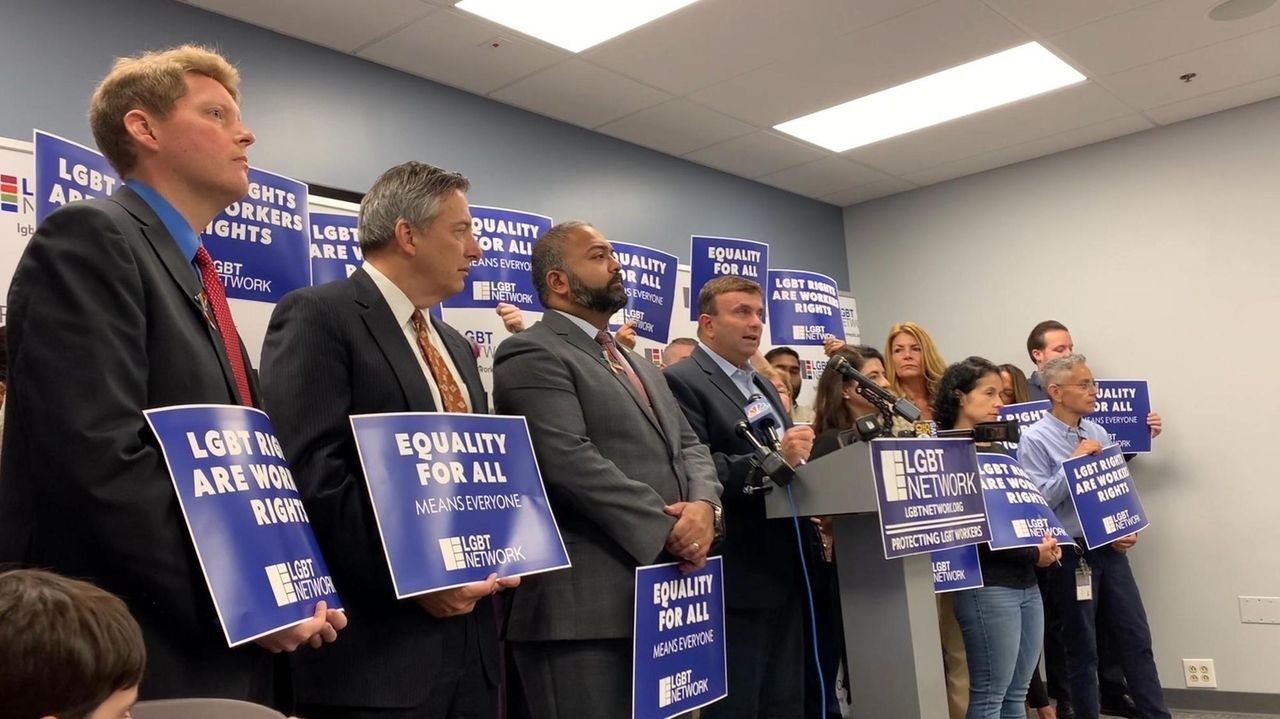 The suit, one of three being considered by the country's highest court Tuesday, was brought by the estate of Donald Zarda, who said he was fired from a Calverton skydiving company because he was gay. At issue is whether federal civil rights law protects LGBT people from job discrimination. Credit: Howard Schnapp

About two dozen people rallied in Hauppauge Tuesday morning, ahead of Supreme Court arguments in the case of a man who said he was fired from a Calverton skydiving company because he was gay.

The suit, filed by the estate of Donald Zarda, is one of three LGBT rights cases being considered by the country's highest court Tuesday. At issue in the closely watched cases is whether federal civil rights law protects LGBT people from job discrimination.

Most states currently don't protect employees from workplace discrimination due to their sexual orientation or gender identity.

“This is an extremely important day for our country and the LGBT community," said David Kilmnick, president and CEO of the LGBT Network.

Supreme Court to hear LI LGBT discrimination suit The suit, one of three being considered by the country's highest court Tuesday, was brought by the estate of Donald Zarda, who said he was fired from a Calverton skydiving company because he was gay. At issue is whether federal civil rights law protects LGBT people from job discrimination. Credit: Howard Schnapp

He added, “I can’t believe in this day and age we are actually having Supreme Court hearings to determine whether it is legal to discriminate against a group of people in our country."

People at the rally included public officials, LGBT advocates, and community group members. They carried signs saying “LGBT rights are workers rights” and “Equality for all means everyone.”

Kilmnick said that if the Supreme Court rules against the workers who claim they were discriminated against, it would likely be the beginning of widespread attacks on the LGBT community that could include areas such as housing, health care, credit and education.

State Sen. Kevin Thomas (D-Levittown) said the cases are “appalling and it’s scary. This is an absolute travesty that such a case has come to the U.S. Supreme Court.“

"The LGBT community are human beings. They are not looking for any special rights,” he said. “They are looking for the same rights that everyone else has in this country.”

Suffolk County Deputy Executive Jon Kaiman, a Democrat, said, “To find out that you might not be able to go to work simply because of who you love and how you love — it’s unacceptable.”

Some speakers said they had been victims of job discrimination themselves because of their sexual orientation.

Em Moratti, 26, of Huntington, said she was pushed out of a possible job as a school librarian at the end of her student teaching phase because she is active in the LGBT community.

“This ruling, regardless of which direction, will make an incredible impact on the lives of LGBT people,” Moratti said. “We can only hope they rule in our favor, and no one ever has to experience what I experienced ever again.”

Zarda, a skydiving instructor from Missouri who had been living on Long Island for the summer, was fired from Altitude Express, also known as Skydive Long Island, in 2010.

Zarda, now deceased, had contended that he was fired after telling a woman he was preparing to take on a dive that he was gay. Zarda had said that he would sometimes reveal his sexual orientation to allay concerns women might have about being strapped together during a dive.

The company, meanwhile, said that Zarda was fired because of his customer service.

Zarda initially lost his lawsuit, but the Second U.S. Circuit Court of Appeals ruled for him.

The name Skydive Long Island was sold a few years ago to another company which, on its website, notes that it has nothing to do with the previous owner who fired Zarda. The previous owner could not be reached.

Zarda's case has been consolidated with that of a man who said he lost his job working for Clayton County, Georgia, after he began playing in a gay recreational softball league. The Supreme Court was also expected to hear arguments Tuesday in the case of a transgender funeral director from Michigan who was fired when she told her employer that she had struggled with gender identity issues almost her whole life and planned to begin dressing as a woman.

The issue to be determined is whether Title 7, a key provision of the Civil Rights Act of 1964 that bars discrimination in employment because of sex, covers LGBT people.

During the Obama years, the federal Equal Employment Opportunity Commission had changed its long-standing interpretation of civil rights law to include discrimination against LGBT people. The law prohibits discrimination because of sex, but has no specific protection for sexual orientation or gender identity.

The Trump administration and the employers say Congress could settle the matter by amending Title 7 to include LGBT people. Legislation to that effect is pending in Congress, but is not likely to pass the Republican-controlled Senate.

But the workers contend, and the lower courts that have ruled for them have reasoned, that the law as it stands covers sexual orientation and gender identity because discrimination against them is based on generalizations about sex that have nothing to do with their ability to do their jobs.

They also argue that they were fired for not conforming to sex stereotypes, a form of sex discrimination that the Supreme Court recognized 30 years ago.

DOJ: Law doesn’t protect instructor from firingA Long Island skydiving company's decision to fire a gay instructor is the focus of a new Department of Justice brief arguing that federal law doesn't protect against workplace discrimination on the basis of sexual orientation.