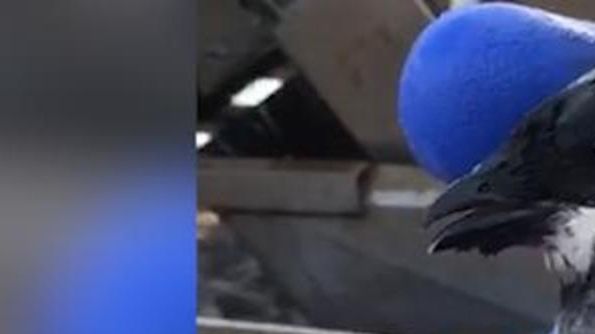 A dovekie rescued from waters off Long Island is held by Justin Seiler, a crew member of the Montauk-based fishing boat Caitlin & Mairead, on Jan. 11, 2018. The tiny sea fowl was taken to the Evelyn Wildlife Rescue Center in Hampton Bays, where it will be fattened up and released back to the wild. Credit: Dave Aripotch

Doug Davidson, a crew member of the Montauk-based Caitlin & Mairead, saw the tiny bird “having trouble in the waves” and used a shovel to help it aboard, said Bonnie Brady, executive director of the Long Island Commercial Fishing Association.

Brady said 30-mph winds had whipped up 13- to 15-foot seas the night before, perhaps disorienting the dovekie. Her husband, Dave Aripotch, captains and owns the boat.

Rescuers took the dovekie to the Evelyn Alexander Wildlife Rescue Center in Hampton Bays. Staci Earl, a wildlife rehabilitator there, said the dovekie is in “fairly good condition,” with no known injuries, but it’s “just really thin.”

The bird “might have been blown around a bit at sea,” she said.

The plan is to fatten the dovekie up over the next few days and release it in calmer bay waters soon. “It will fly to where it wants to go,” she said.

The center rehabilitated a small group of the birds in 2010.

Dovekies are auks, like puffins. They are a bit larger than a human fist and look like small penguins. They can go their entire lives miles from the Long Island coast without being spotted by a person, experts say.