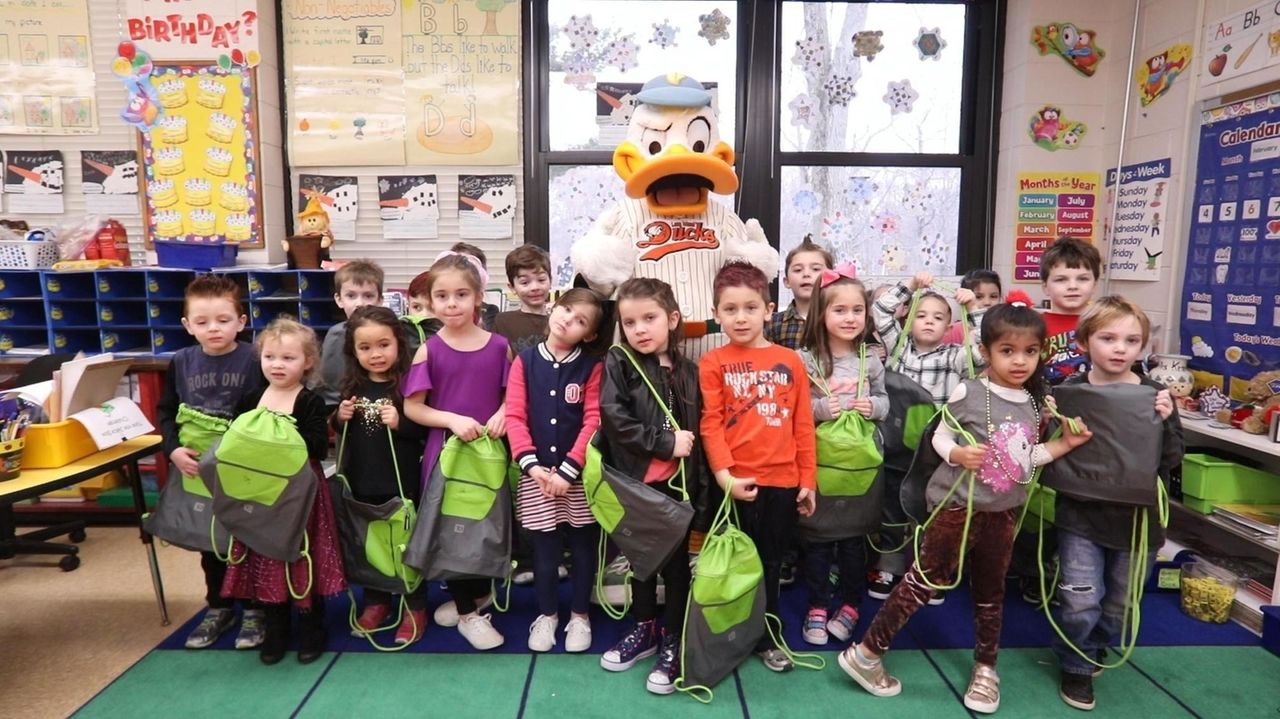 The Long Island Ducks mascot Quackerjack, on Friday, Feb. 9, 2018, visited Fort Salonga Elementary school as part of the "Take A Duck to Class" program. Kindergartner Victoria Rice, won an essay contest held by The Long Island Ducks and TD Bank after she chose her triplet sister, Cecilia, who had faced multiple medical procedures for her epilepsy, as her "hero."  Credit: Jessica Rotkiewicz

A Long Island kindergartner had a special visitor at school Friday: a six-foot duck.

Out of thousands of submissions across Long Island schools, Victoria Rice’s essay about her hero — her triplet sister Cecilia, who has hydrocephalus and epilepsy — was one of four winners of the TD Bank “Take a Duck to Class” essay contest.

That brought the Long Island Ducks mascot, QuackerJack, to Fort Salonga Elementary School to see Victoria, Cecilia, their triplet brother Winston — all age 6 — and dozens of other cheering kindergartners at a school assembly.

In her essay, Victoria describes how heroic Cecilia is for undergoing multiple medical procedures to treat hydrocephalus, the buildup of excess fluid in the brain, and epilepsy. Cecilia has undergone three brain surgeries, and suffers from seizures, resulting in frequent hospital trips, the essay said.

After the school assembly, QuackerJack visited with Victoria’s class and signed autographs.

Victoria and Cecilia’s parents, Melissa, 42, and Jeremy, 48, of Northport, say the two have always been close and that Victoria and Winston always keep an eye on their sister.

“Victoria’s always had a very nurturing relationship with [Cecilia],” Melissa Rice said. “She always helps me when we’ve got emergencies,” her mother said.

Their father said the girls are constantly playing with each other at home, rarely spending much time apart.

Stephanie Montecalvo, principal of the elementary school, thought few children were more deserving of winning the contest than Victoria.

“When I got to read the essay, I was blown over by the love and admiration Victoria has for her sister,” she said.

Montecalvo described Victoria and Cecilia, also known as Ceci, as model students, being sweet and nurturing to those around them.

Other heroes mentioned in Victoria’s essay were the first responders who have gotten Cecilia to the hospital quickly when needed, as well as the doctors at Cohen Children’s Medical Center who treat her.

“I’m really happy my sister wrote about me,” she said.