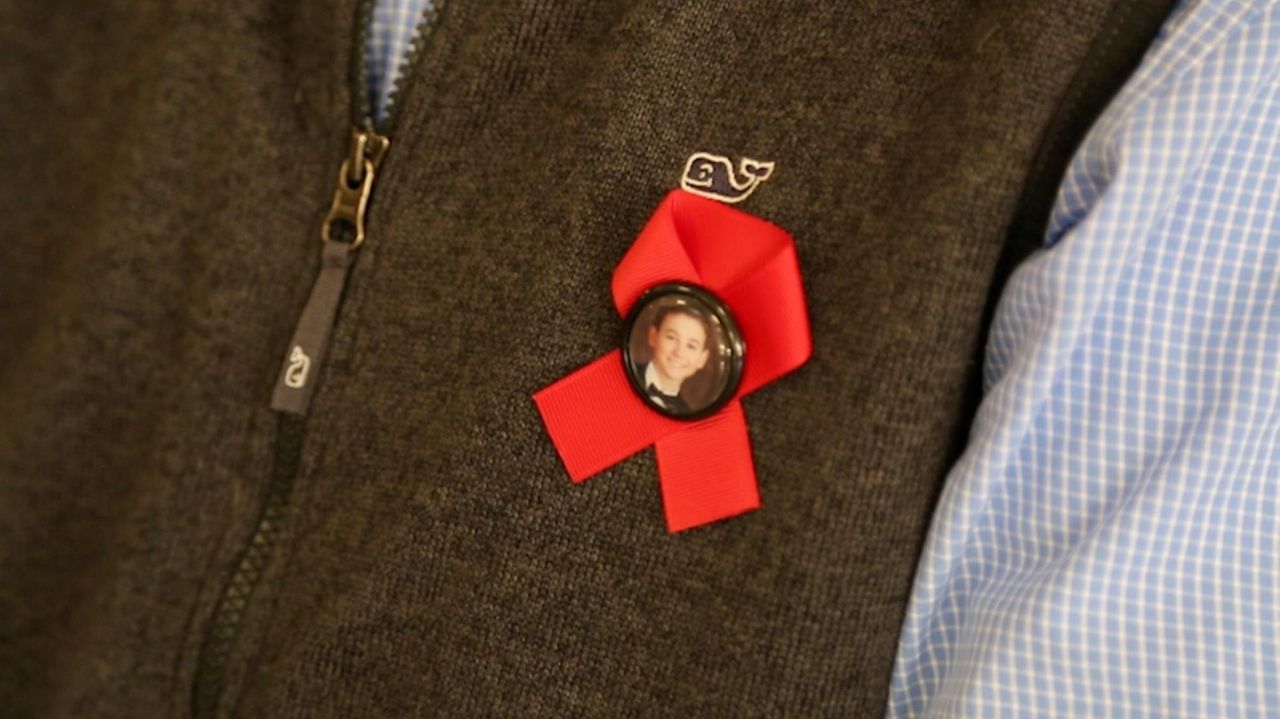 On Wednesday, the family of Andrew McMorris took part in Suffolk County's Choices and Consequences program at Shoreham-Wading River High School. McMorris died of injuries six months ago after being struck by an accused drunken driver. Credit: Barry Sloan

At first, Alisa McMorris said it was impossible for her to even practice giving a presentation about her 12-year-old son's death in what prosecutors say was a drunken driving crash six months ago.

She and her husband, John, had put together a slideshow of his life, but even rehearsing the narration was overwhelming.

"When we first started doing it, I couldn't get through the slides without breaking down," she said. "I often say I get the strength from my son. It just came."

It had to be done, her husband said. "You have to dig deep. We're not going to let his death be in vain."

For the couple and Andrew's older sister, Arianna, 17, talking about how and why he died is crucial for them now. That's how they found themselves in front of hundreds of Arianna's Shoreham-Wading River High School classmates Wednesday morning, talking with quiet emotion about the meaning of Andrew's brief and effervescent life, and his death.

Prosecutors say he was killed when Thomas Murphy of Holbrook drove drunk and plowed into Andrew's Scout troop in Manorville.

They spoke at an expanded version of the Choices and Consequences program that the Suffolk district attorney's office often does for school districts. Assistant District Attorney Brendan Ahern, chief of the office's Vehicular Crimes Bureau, publicly thanked the family for helping him make his case.

"Some of you knew who Andrew was," John McMorris, a guidance counselor in the Miller Place school district, began softly in an auditorium decorated with red ribbons, the color of Andrew's Scout Troop 161. Such ribbons are still on utility poles throughout the area.

With snapshots of his son's life behind him on a screen, he told them of his son's many enthusiasms, including flying. In one picture from last summer, Andrew posed at Long Island MacArthur Airport with his flight class in front of the police helicopter that would transport him to Stony Brook University Medical Center a few months later.

John McMorris said he and his son's Scout troop were in formation not far from where their planned 10-mile hike began when a Mercedes-Benz driven by Murphy veered off the road into them. Andrew was the last boy hit, his father said.

"That man was drinking all day," John McMorris said, evenly. "One of his buddies offered him a ride, but he refused. This was 100 percent avoidable."

Alisa McMorris, a physician assistant, recounted the panicked series of events that ended that night with the family gathered around her son in the hospital, after doctors determined he was brain dead. His injuries were so severe his organs could not be donated.

"We realized Andrew is leaving us," she told the silent auditorium. "We played his favorite music. We whispered in his ear and told him that we loved him."

Students sniffled as she explained why she was standing before them: "I'll use your strength, my baby boy, and make sure this never happens to anyone else. And that's why I'm speaking to you today."

Arianna McMorris has also done her part, starting the high school's new Students Against Drunk Driving chapter. "I don't want to sit around and do nothing with my life," she said afterward. "My goal is to help students make better decisions."

"I'm amazed," he told them on the stage. "I'm in shock. I'm in awe, because there so much strength and courage here."

In his presentation, Ahern used photos and descriptions of some of the many fatal crashes he's handled to urge students to pause and think before joining the ranks of the No. 1 killer of teenagers. Suffolk County has the deadliest roads in the state, he said, and 365 Long Islanders are killed in crashes every year.

"You folks are dying out on the roads," Ahern told students. "It's telling your mom goodbye and getting into a car and never seeing her again."

Arianna McMorris said she considers herself to be a strong person, but she said she's been grateful that her classmates have kept on eye on her. "My friends have always been true friends," she said.

Murphy's attorney, Stephen McCarthy Jr., said by phone that he and his client felt that "anything the McMorris family is doing to heal is absolutely supported" by them. Murphy is next due in court on April 2.

Andrew's parents said they hoped Murphy would be held accountable for his actions.

Toward the end of her talk to students, Alisa McMorris said that if they make one bad decision by getting intoxicated, they shouldn't compound it by driving.

"Any of you here can call me at 3 in the morning, and I will come get you," she said.

Ahern urged students to take Alisa McMorris up on her offer, or to call their own parents if they find themselves intoxicated with no way to get home.