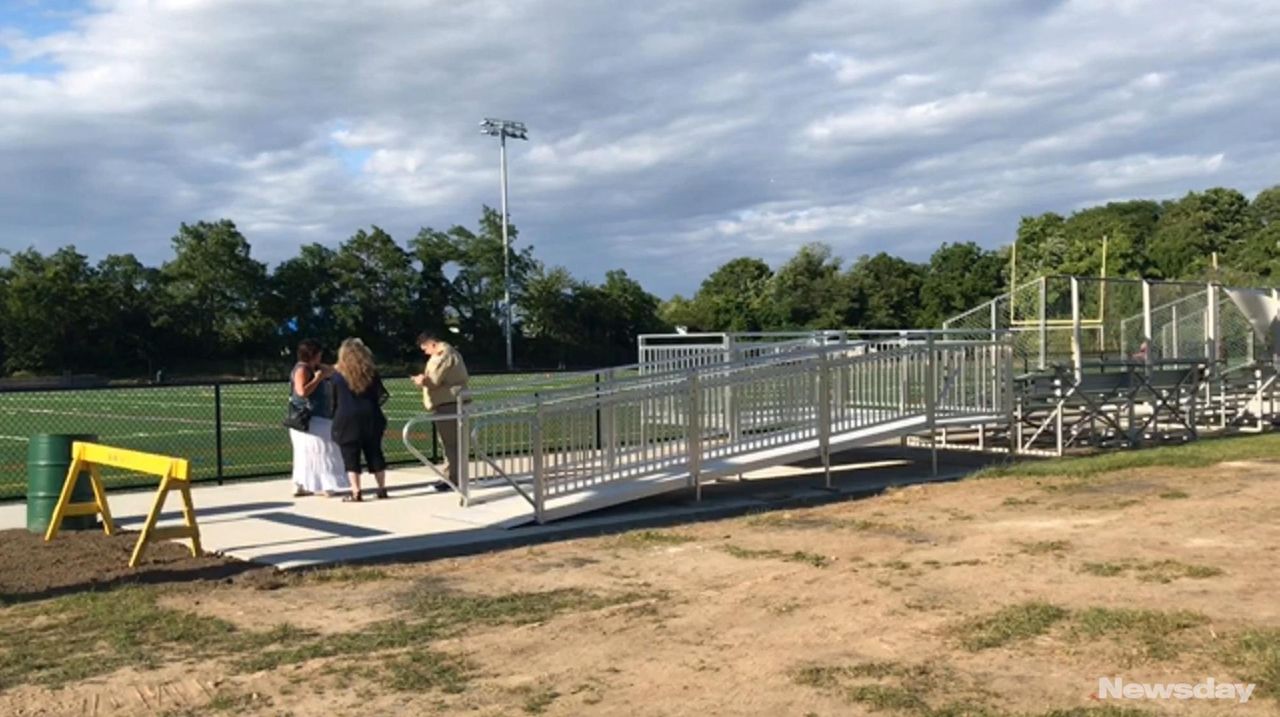 It was a promise that few expected Anthony D’Arrigo to keep: build a handicap-accessible platform next to a football field in Deer Park so that his friend, John Eugene Batkiewicz, had a better view of games.

After all, D’Arrigo, now 19, was only about seven when he told Batkiewicz that he would build it, and he had neither the money nor the know-how to pull off such a project.

Now, 12 years later, the platform stands. It will be dedicated in a ceremony Saturday.

And although Batkiewicz, who died last year, didn’t live to use it himself, his family called it a meaningful tribute to his memory.

The platform shows that “he lived and he mattered,” said Batkiewicz’s mother, Kathleen, of Deer Park. “He would’ve loved it.”

The aluminum structure in Birchwood Park rises 26 inches off the ground and is wide enough to accommodate several wheelchairs. It is just high enough for wheelchair users to see above a fence next to the field where Batkiewicz’s brother, David, and D’Arrigo used to play in a youth football league.

It was during a rainy day there about 12 years ago when the muddy sidelines confined Batkiewicz -- who was quadriplegic and used a wheelchair-- to his wheelchair-accessible van during a game.

That’s when D’Arrigo said he had the idea of building his friend a better view.

“He was at every game,” recalled D’Arrigo, who attends Suffolk County Community College in Brentwood. “I wanted him to be closer.”

D’Arrigo, who joined the Cub Scouts when he was six, saw his chance to make good on the promise about nine years ago when he was looking for a service project necessary to rise to the rank of Eagle Scout.

But building the platform was harder than expected.

Officials in the Town of Babylon, which owns the park, were supportive of the undertaking but required that the structure comply with all relevant federal and town codes, D’Arrigo’s mother, Heather, said.

D’Arrigo also had to find a way to finance the $3,300 project, so he threw a fundraiser dinner in April 2017. New York Stairlifts, of Amityville, helped D’Arrigo design the platform and provided the parts. Fellow Boy Scouts helped him assemble the structure.

Shortly after the fundraiser, however, Batkiewicz died of cardiopulmonary arrest and respiratory failure, his mother said. He was 26.

D’Arrigo said that he was devastated by his friend’s death and that he would not live to see the finished platform.

“I was so close to having him see it, and I just missed it,” he said on a recent afternoon, standing next to the platform with his mother.

But “it’s not only for him,” noted D’Arrigo, who became an Eagle Scout last year.

The ceremony will be at 11 a.m. Saturday at Birchwood Park, where D’Arrigo will formally receive his Eagle badge.