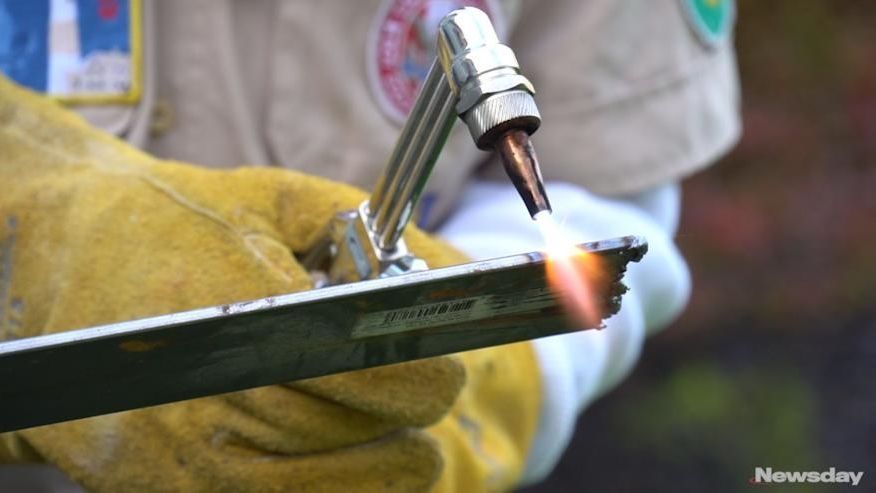 Eagle Scout John Ninia of Setauket, a senior at Ward Melville High School, has achieved all 137 merit badges for the Boy Scouts of America, a rare accomplishment. On Saturday, Nov. 4, 2017, he demonstrated a few, including plumbing and welding.  Credit: Ed Betz

Since his first week at summer camp in 2011, John Ninia knew Boy Scouts was a group where he could do something big.

“I remember telling my dad that I was going to go for all the merit badges,” Ninia said. “And he didn’t really believe me and he just thought nothing of it. And then I actually went out and got it.”

Now 17 and a senior at Ward Melville High School, the East Setauket teenager has done something his 11-year-old self can be proud of: completing all 137 merit badges for Boy Scouts of America.

The achievement is “extremely rare,” but the organization said it does not track how many Scouts earn all available merit badges.

Ninia, from Troop 70 in Setauket, also earned a William T. Hornaday Bronze Medal from the Boy Scouts after completing three major environmental projects. According to the Boy Scouts of America, it is only given to scouts who “completed truly exceptional conservation projects.” Since 1917, about 1,100 scouts have received Hornaday medals.

“John believes in meritocracy,” said his father, Jerry. “If you work hard and you deserve it, you get it.”

The prospect of working hard certainly didn’t stop Ninia from pursuing his goal.

At West Meadow Beach in the fall of 2015, Ninia got rid of Japanese knotweed, an invasive species, without the use of any chemicals and then planted native bayberry bushes there.

A year later, he worked on a project at a park where his family sometimes walks its dog, Jade. In the arboretum at Frank Melville Park Reserve, he cleared an overgrown area and planted native trees.

While working on a science research project for school this August, he tested the nitrogen levels at different points in Long Island Sound. In the process, Ninia found a “disheveled” rain garden in Poquott’s California Park. He repaired it to help take out some of the nitrogen from runoff when it goes into the water.

“You have to admire his interest in the environment,” said Lawrence Swanson, a SUNY Stony Brook professor who focuses on coastal oceanography and marine pollution and who helped Ninia with the California Park project. “And his enthusiasm to work on a project that maybe might seem a little distasteful.”

Just like his Hornaday projects, some of his badges took a while to complete. They required lessons, observing professionals and long-term logs. He had to take trumpet lessons for his bugling badge and shadowed his family’s vet for a day for his veterinary science badge.

Ninia’s parents supported him all along, especially when it came to driving him around to meet with counselors, go to lessons and get to project sites. After that first week of summer camp in 2011, he told his parents he wanted to go back the next week. They made sure it happened.

Merit counselors and other project advisers also guided him through the processes for different badges.

“I’m very grateful to the people who gave me their time and helped me along the way,” Ninia said.

Some of his favorite badges include scuba diving, horseback riding and cycling. For scuba, he completed a multi-day program with the Hampton Dive Center in Riverhead, which included open-water dives. His father went with him on another trip to Massachusetts to help earn a white-water rafting badge.

When it came to bugling, water sports and skating, however, he didn’t have a lot of experience and faced some challenges. The water sports badge took more than a year to complete, and he fell down 20 times when he first tried water skiing.

His struggles show badges are meant to push people out of their comfort zones.

“It’s a great way to know who you are and develop a sense of identity,” Ninia said.

Every badge he has is displayed on two brown sashes worn with his scout uniform. It’s hard to imagine them blank. Ninia said he usually worked on one or two badges at a time, but during camp he could work on anywhere from five to seven. He took occasional breaks, but never for very long.

Ninia began as a Cub Scout in third grade, became a Boy Scout at the age of 11, and an Eagle Scout at 14. He will age out of the organization in January, but he thinks he could help as a merit counselor for other scouts in the future.

Ninia is also a member of the National Honor Society and received a Gold Presidential Service Award for community service. Currently, he is in the middle of applying to college.

The University of Notre Dame, Georgetown University, Dartmouth College and Swarthmore College are among the schools he said he is applying to. He plans to major in environmental studies.

The impact of Boy Scouts on his life won’t be lost after January, or even after he goes off to college and beyond.

“A lot of the ideals of scouting, he’ll take with him,” said Jerry Ninia. “The memories of the camaraderie, the memories of camping outdoors and living the scout oath.”

1:19
Students organize rally against anti-Asian crimes
NY now one of 18 states with half of adults fully vaccinated against COVID-19
Pride parade organizers ban cops from marching in uniform
1:25
Doctors disagree on whether Cuomo's decision to lift restrictions is wise
Rep. Zeldin: I won't call Biden election 'illegitimate'
2:22
Long Island towns and cities getting into the weeds on NY marijuana law
Didn’t find what you were looking for?