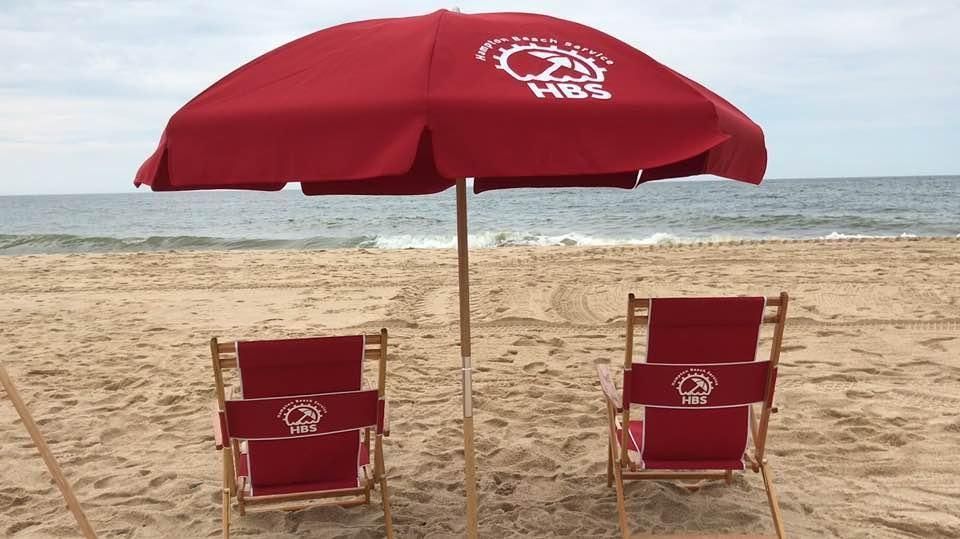 East Hampton Town officials issued a summons for peddling without a license to Hampton Beach Service, a beach chair rental delivery company that has employees clean the beaches, as seen at Edison Beach in Montauk on Thursday, June 29, 2017 (credit: Newsday/Rachelle Blidner).

A new Montauk business that the owners say was created to help clean up beaches may be violating town code for operating on the shore, an East Hampton Town official said.

The owners of Hampton Beach Service said they launched Montauk’s only beach umbrella and chair rental delivery service this summer to staff public beaches with people to pick up trash on them.

The price customers pay to rent umbrellas or chairs goes to keeping employees on the beach every day from 9 a.m. to 6 p.m. to clean instead of leaving after each delivery, said Mark Ripolone, who runs the company with Carlos Real. Prices range from $20 for an umbrella for half a day, to $200 for a family package, according to the company’s website, which also states the fees are for environmental cleanup, not chairs or umbrellas.

“You’re not renting a chair. You’re renting our service,” said Ripolone, who also owns Ditch Plains Taxi and 123 Delivery, a food delivery service. “You’re renting us to clean up the beaches.” While lifeguards occasionally pick up trash, the beaches can become littered throughout the day from summer crowds.

Deputy Town Supervisor Peter Van Scoyoc said the business appears to be violating town code for selling and delivering items on the beach, which is prohibited for businesses without town concession agreements.

“I don’t think this is something the town’s going to allow because we do consider it peddling on the beach,” Van Scoyoc said. “Imagine what our beaches would look like if we allowed peddlers on the beaches. You probably couldn’t even put down a blanket.”

Town code defines peddlers as people who travel from place to place advertising, selling and delivering goods to customers. It requires that they apply for licenses and not operate within a 2,000-foot radius of town beaches and parks.

Town officials issued Ripolone a summons this month for peddling without a license. In a hearing yesterday, an East Hampton Justice Court judge adjourned the case until Aug. 21.

Ripolone, 29, said the business will continue to operate, adding that it is not peddling because all transactions are done through an app before delivery.

The company has operated since Memorial Day weekend with four other employees at Edison, Kirk Park, Ditch Plains and Navy beaches.

Ashira Ostrow, a Hofstra University law professor specializing in municipal and land use law, said the service seems to fall in a gray area of the peddling code because there is an exception for businesses that deliver goods purchased elsewhere to beaches without concession agreements.

“This is a town that’s intensely interested in its beach and keeping it clean,” she said. “Its property values depend on how desirable the beach is. This is not a business that’s going to fly under the radar in the Hamptons in the summer.”