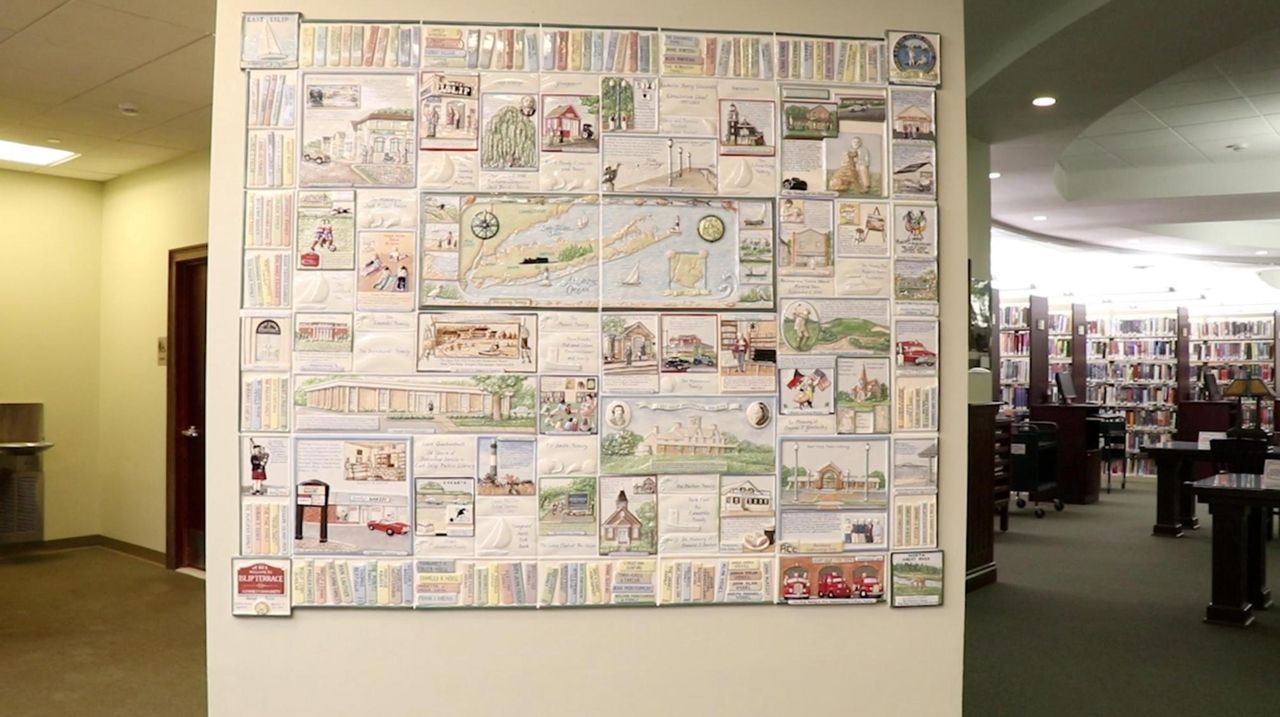 East Islip Public Library director Guy Edwards, on Feb. 8, talked about the handcrafted mural made up of tiles that depicts the quirky history of  East Islip and nearby hamlets. The project was completed at the East Islip Library this year after 15 years. Credit: Jessica Rotkiewicz

A handcrafted mural made up of tiles that depicts the history of East Islip and nearby hamlets — including some quirky facts — has been completed at the East Islip Library after 15 years.

The "Wall of Names" largely portrays slices-of-life scenes in East Islip, Islip Terrace, Great River and North Great River. Artist Marion Grebow of West Redding, Connecticut painted most of the 100 tiles that hang on walls in the center of the library's first floor.

Library director Guy Edwards calls the fundraising project his "baby." Most donors paid between $75 to $2,000 per tile to feature their names and an image of their choosing. About $45,000 was raised for the library, he said.

“I wanted each tile to be an interest to the community, so people would come and read the tiles and learn something new,” Edwards said.

The tiles display mom-and-pop shops, houses of worship and notable locations. One tile commemorates the marriage between East Islip librarian Kassia Worst and her husband, Andrew, who met at the library and said their vows there on Sept. 2, 2007.

Edwards takes pride in the fact he hung each tile.

“That’s why they’re a little crooked here and there,” he quipped.

Oscar’s in East Islip: The bowling alley was once home to eight lanes that were relocated from the Vanderbilt Estate in the 1920s. Oscar’s continued as a popular business until it closed in the 1970s. Donors Joseph and Sally Gabriel were frequent patrons, Edwards said, noting it also used to be a restaurant.

Christ Lutheran Church was established in 1915 when 20 people signed a charter in Germantown, which is now Islip Terrace. The tile says “services were originally conducted in a converted chicken coop,” and displays a scene of women and children sitting outside the coop while a preacher reads from a book of worship. The tile was donated by the congregation at Christ Lutheran Church.

Rudy’s Beauty Salon in East Islip was run by Rudy and Abbie Treml from 1933 to 1984. Clients signed up for appointments a year in advance. Rudy even did bedside cuts for ill customers, and employees styled hair for clients' funerals, Edwards said. The tile was donated by the Beinstein/Treml family.

Great River post office. The first post office in the area was established in Great River in 1889. Decades later, it was considered the smallest and among the oldest in the country. The original building still stands, but it has since expanded, Edwards said. The Great River Association donated the tile.

Baumeister’s Tavern in East Islip, originally named Steinhilber’s Steakhouse, in the 1940s was considered the second restaurant on Long Island to have a television. The tile was donated by Beachtree Cafe, which is now H20 Seafood & Sushi on West Main Street.

Timber Point. An 18-hole hole golf course and yacht club opened at Timber Point in Great River in 1926. The course, with nine seaside holes, was considered one of the most challenging in the country. Its members belonged to the Suffolk County Republican Club. The club's signature 5th hole, nicknamed the "Gibraltar," is pictured. The course itself was dubbed "50 Bankrupted Millionaires" because of the Great Depression's toll on some founders. William Condon, a Suffolk County Supreme Court judge, and his family sponsored the tile.