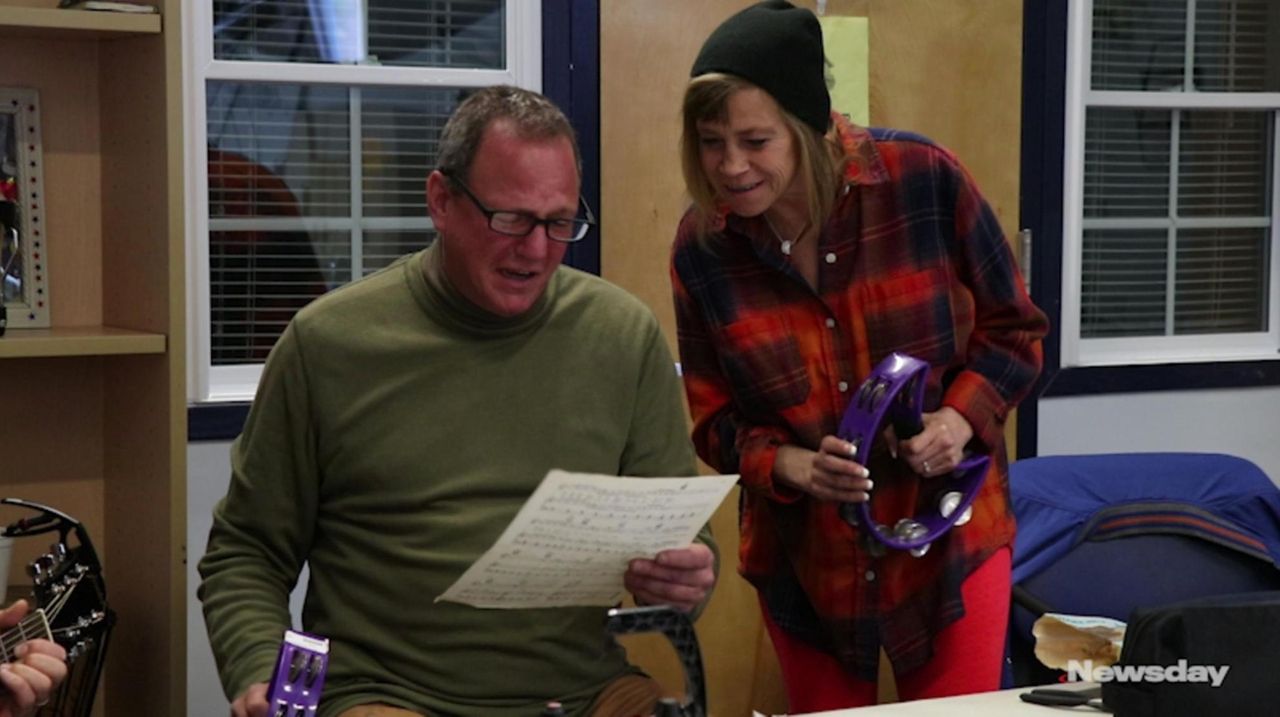 After living out of a car for nearly a year, Sue Santasiero and Stuart Eckhaus now have an apartment through Hands Across Long Island, a social services nonprofit. Credit: Jessica Rotkiewicz

For nearly a year, Sue Santasiero and Stuart Eckhaus lived in a car.

By day, they wandered around supermarkets and department stores. By night, they moved their car from parking lot to parking lot — stores, hospitals, parks.

They never slept well, worried they would be attacked or kicked out.

“You have to sleep with one hand on the baseball bat and the other one on the ignition, in case you have to get out of there quick,” Eckhaus recalled.

But this Easter, the couple can celebrate their own resurrection. With the help of an agency run by a woman who once studied to be a nun, the couple has risen from the depths of despair.

They have an apartment and volunteer at Hands Across Long Island in Central Islip, the nonprofit that brought them out of the cold. They have all they want to eat and clothes to wear.

And, most of all, they have hope.

“There is nothing better than waking up in the morning and smelling that fresh air and having my cup of coffee and listening to the birds,” Santasiero said.

For the Rev. Hector Rivera, Santasiero and Eckhaus are the human embodiment of Easter, the Christian celebration that marks the resurrection of Jesus three days after he was crucified on Good Friday.

“Stu and Sue were basically living in a situation that could be compared to a tomb of death and just no hope," said Rivera, who also helped the couple. "Now they are alive, they are vibrant and looking forward to the future.”

Their story starts with Santasiero, 51. In high school, she drank, did drugs and had a troubled home life. Later, she ended up in a bad marriage, landed in jail because of a drunken driving charge and eventually found herself out on the streets, she said.

She would sleep under the stairs at the Long Island Rail Road station in Babylon, the trains rumbling on the tracks above her. She stayed in a spot near where the conductors worked because she felt a little safer.

Still, Santasiero remembers many nights when she was out in the open, “freezing and crying my eyes out.”

She had met Eckhaus, a 62-year-old former roofer, at a restaurant several years earlier. He had his own spotty past: a DWI, money problems from the legal fees he had to pay to fight the DWI and a body that was shot from decades of roofing.

He had been homeless, too, but was staying in an assisted living center that Suffolk County's social services department had found for him. By now, Santasiero had been homeless for about a year and she was fed up with being cold and being scared.

Last May, the two decided they wanted to be together, but Santasiero couldn't move in with Eckhaus because of the center's rules. They opted to live out of Eckhaus’ 2001 Aurora Oldsmobile.

Their life was survival, and killing time. For hours, they would wander through stores.

“You feel like you are a degenerate,” Eckhaus said. “I would say, ‘Sue, these people are looking at us like they know we are homeless.’ You just don’t feel right.”

Every night, they would have to figure out where to sleep, and move every couple of hours. A favorite spot was Long Island Community Hospital in East Patchogue, where they parked near the emergency room because nobody bothered them.

One day, Santasiero was walking down Patchogue's Main Street and saw a sign for showers being offered by Hands Across Long Island. The group had parked its trailer-sized portable shower unit for the homeless outside the Congregational Church of Patchogue.

“To us that was like winning the lotto because now we knew at least on Wednesdays we would shower,” Eckhaus said.

The worker at the trailer later suggested that the couple come to the agency’s headquarters in Central Islip for more help.

And they took the advice. At the center, they had hot meals, received mental health counseling and took classes on meditation, job skills, nutrition, writing, gardening.

Still, they didn't have a place to live.

The summer turned into fall and fall turned into winter. Nights in the car were cold. Eckhaus would turn on the engine for five or 10 minutes every hour to run the heater. The night before Thanksgiving, about 11, the battery died. It was raining and hailing. They got soaked when they went outside to go to the bathroom.

For the couple, it was a low point. Things could only get better.

A few weeks later, Hands Across Long Island offered them an apartment. When they found out, they both cried.

December was their move-in date. Rivera blessed the apartment. They pay $700 a month in rent, through government assistance.

“We’re human again,” Eckhaus said. "It’s like we’re back in the universe again. You feel so great.”

At the center, which they still visit most days, they have become leaders. Santasiero tells her story to those who are homeless, like she once was. Eckhaus volunteers on the mobile shower unit.

Many whom the center helps have “total devastation in their lives,” said Ellen Healion, the group’s CEO and one of its founders. “Now they are coming to a place where they are seeing that hope again and they are realizing there is a promise.”

“It is very much an Easter story around here every week,” added Healion, who at 23 entered a convent for several years.

Founded in 1988, Hands Across Long Island serves 3,500 clients a year, many of them homeless. The agency relies heavily on private donations and public funds.

Santasiero and Eckhaus can't imagine where they'd be without the center.