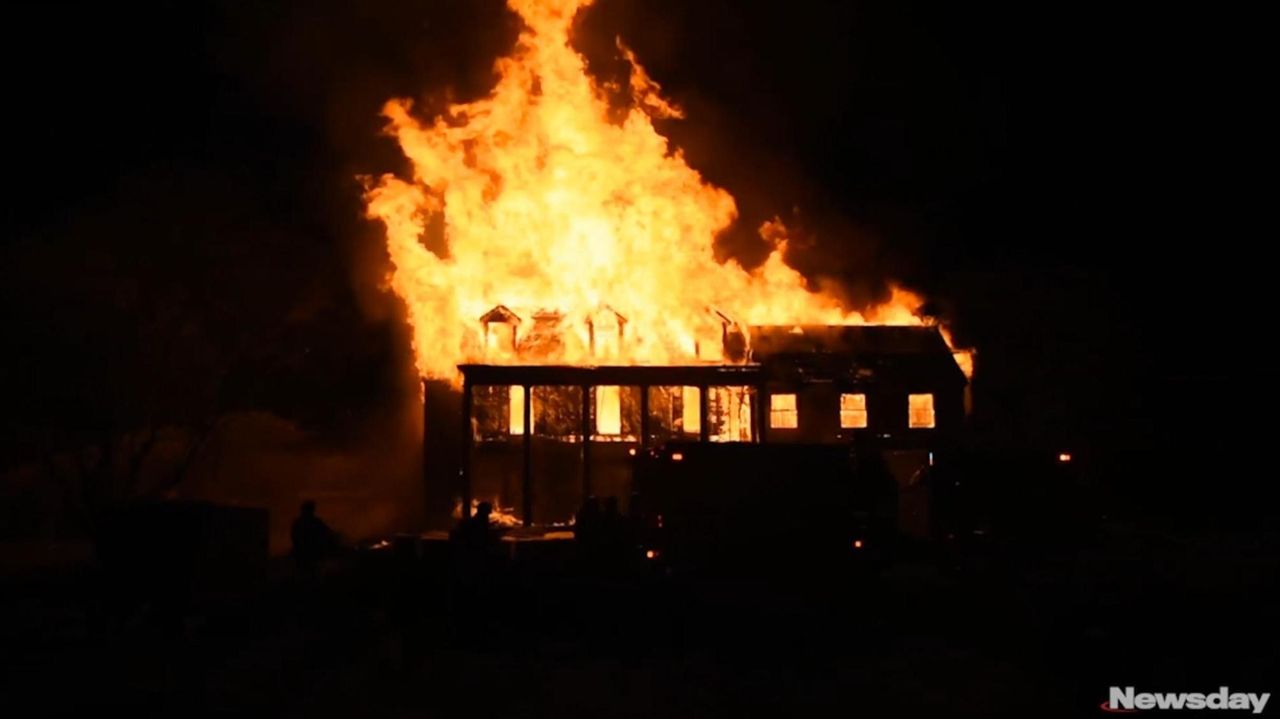 A Smithtown home dating to 1845 and once owned by generations of the town's founding family burned to the studs Monday night, the former owner said. Suffolk County police said they received a call at 7:56 p.m. Monday regarding a house fire on Edgewood Avenue in Smithtown. The blaze is under investigation, police said. Credit: Stringer News Service

Richard Albano was beside himself Tuesday.

The night before, the historic Smithtown mansion he had bought just weeks earlier— and was renovating — went up in flames.

Ebo Hill, which dated to 1845 and was once owned by the family that founded Smithtown, was so damaged that it had to be razed, Suffolk County police and fire officials said. The cause of the fire is being investigated by the county and Smithtown.

Early Tuesday, Albano said he was too emotional to talk much over the phone about the fire but had posted his thoughts on Facebook. “I’m not doing this now,” he said in a brief phone interview. “I’m just too devastated.”

In his post on “The Mansion at Ebo Hill” page, Albano said a worker who was in the home discovered the fire about 8 p.m. The 11,094-square-foot house had 16 bedrooms and sat on 3.2 acres on Edgewood Avenue.

The worker said “he was in the rear of the home when he heard a loud ‘pop’ coming from the front of the home,” Albano wrote. “He went towards the front and saw that the fireplace mantle was on fire.” The worker put out the flames, according to the post, then found the second floor on fire.

In the phone interview, Albano said there were embers in the fireplace when he left Monday night, but there was “a screen on it and it was closed” so he didn’t give it another thought.

Albano said the renovation had taken the walls down, mostly to the studs, and all the interior doors had been removed.

“It came to us as a fully engulfed structure fire,” said Jeff Bressler, a spokesman for the Smithtown Fire Department. “We didn’t even try to get inside.”

A neighbor, Joseph Esposito, 64,said he was in his home office when he noticed traffic backing up on Edgewood Avenue. He walked outside and saw the fire.

“There were flames, shooting up above the trees,” he said Tuesday afternoon. “It was shocking because all those years, 10 years of living there, the house was vacant. And nothing ever happened to it. This guy tries to restore it, and all of a sudden there’s this. It’s a shame.”

The fire was brought under control shortly before 10:30 p.m., Gargiulo said, and a few small fires were extinguished by about 1 a.m.

“I thank God that no one was hurt, including the worker and the hundreds of volunteer firefighters that came to help,” Albano wrote on Facebook.

Earlier Monday, firefighters had been called to the property to put out a small fire in a trash container that was not near the home.

The previous owner, Richard Longobardi, told Newsday: “I feel awful, absolutely terrible. But nobody got hurt, thank God. It is what it is.”

Longobardi and his wife bought the home in 2001 for $650,000, according to property records. When Newsday reported the sale to Albano earlier this month, both Albano and Longobardi declined to give the sale price or discuss renovation costs. The real estate website Trulia estimated the value of the home at about $2 million.

The mansion’s owners have included several generations of the family that founded Smithtown, including Ethelbert Smith, who worked in the China tea trade in the mid-19th century, and his son, Richard Lawrence Smith, who was prominent in yachting and horse circles in the late 19th and early 20th centuries.

Ebo Hill mansion destroyed by fire, cops sayEbo Hill mansion was to undergo a major renovation, which was to return it to "look like it did the day it was new," then-prospective owner Richard Albano told Newsday earlier this month. Plans in the works to rebuild Suffolk mansionEbo Hill mansion, whose 16 bedrooms, towering portico and 48 acres of woodland made it ...