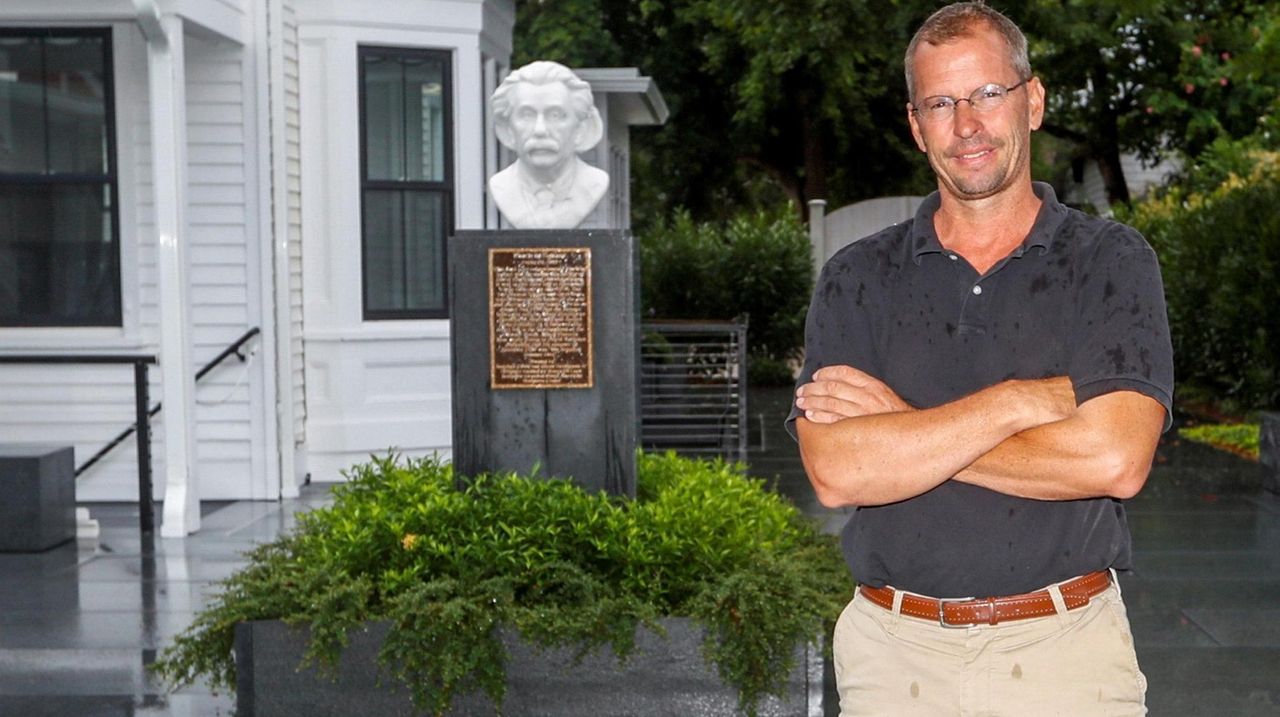 A new public mural depicts Albert Einstein on the North Fork in the summer of 1939 sporting a curious choice of footwear. On his feet are women’s open-toed sandals, size 11, according to local lore, purchased at Rothman’s Department Store in Southold.

The 8 by 8 painting is displayed in the new Einstein Square, a privately owned public space next to the Main Road department store, commemorating the famed physicist’s East End summers. A reproduction of a well-known photograph, the mural also features then-store owner David Rothman at the beach during what Einstein later called his “happiest summer ever.”

Einstein stopped into the store one day looking for sandals, the often-told anecdote goes. Rothman, misunderstanding his German accent, heard the word “sundials.” The two men eventually cleared up the confusion and Rothman sold him the only sandals he had, the strappy pair featured in the mural. A friendship was born.

“This memorial to my grandfather, it’s a lovely statement,” said David Rothman’s grandson Ron Rothman, the current owner of the 100-year-old Southold store. “This story has been told, but now a lot more people are coming to hear it and see it.”

The author of the world's most famous equation spent the summers of ’37, ’38 and ’39 at a home on Nassau Point. It was from there he sent a letter to President Franklin D. Roosevelt, stressing the power of uranium. It is believed this missive led to the development of the Manhattan Project and creation of the first nuclear weapons.

Rothman sold the square and the original department store building to Glenn Heidtmann Jr. and his business partner, Jonathan Tibett, in February 2018 for $575,000. Rothman has since consolidated the business into an adjacent space where he continues to sell his eclectic inventory, which ranges from hardware to guitars.

Heidtmann and Tibett renovated the original Rothman’s building, raising the 150-ton structure to pour a new foundation. They are looking for a tenant for the 2,400-square-foot space that opens into the square, and for the two residences in the building.

They envisioned Einstein Square as a place for gathering and reflection, commissioning artist Michael H. Fusco to create the mural. They also donated a Carrara marble bust 1.5 times the size of Einstein’s head, digitally designed by artist Marco Di Luca and created at the North American Sculpture Center, a Westbury stone art studio owned by Tibett.

The square, which features benches and USB device charging stations, was unveiled during an August ceremony, and to honor the occasion the developers presented a $5,000 check to the Southold Historical Society.

It would have been considerably cheaper to raze the building and construct a new one, said Heidtmann, who declined to say how much he and Tibett have invested in the property. But the partners, both Southold residents, wanted to preserve its history.

“Southold is a place we all love . . . we wanted to create something for the public to enjoy,” Heidtmann said. “There is a history here with Einstein and Mr. Rothman.”

Einstein on the North Fork

There he sent a letter to President Franklin D. Roosevelt in 1939 urging the country to start accumulating uranium. The letter is thought to be the impetus behind the Manhattan Project and creation of the first nuclear weapons.

Einstein struck up a friendship with David Rothman, owner of Rothman’s Department Store in Southold, and called 1939 his “happiest summer ever.”