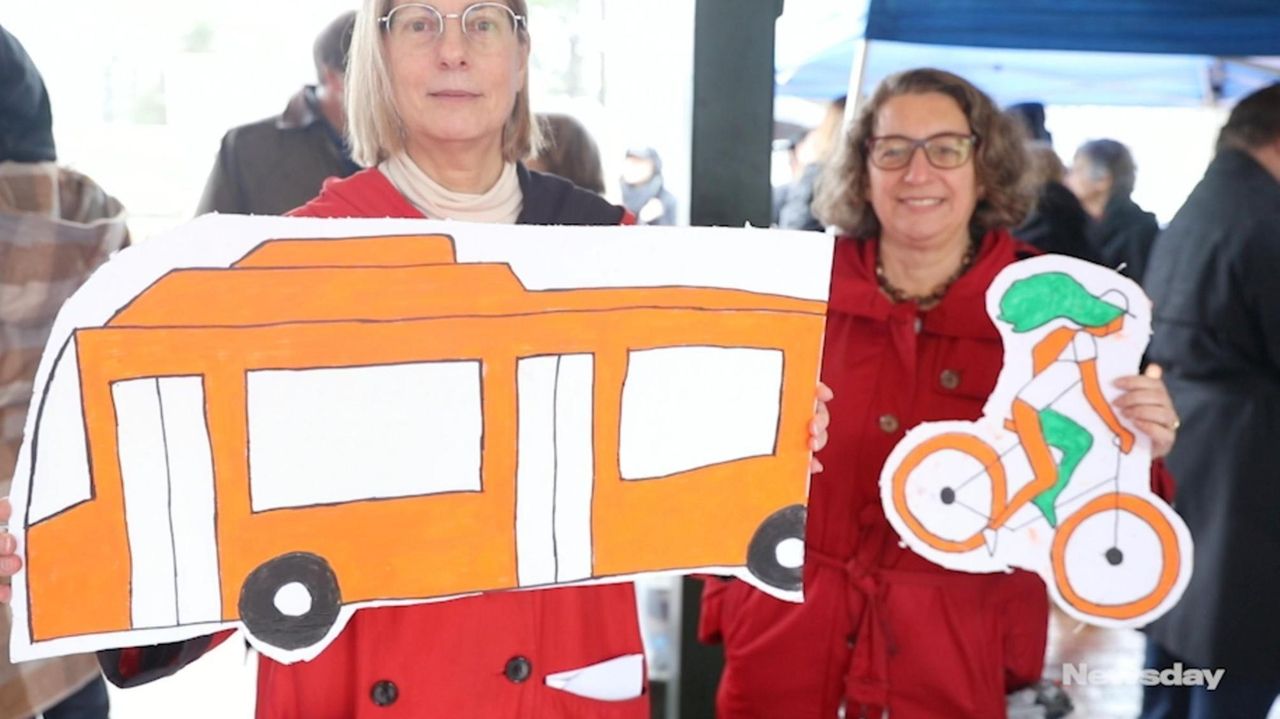 State Assemb. Steve Englebright (D-Setauket) spoke Monday at the Long Island Rail Road station in Stony Brook about his initiatives to combat the use of fossil fuels. Credit: Randee Daddona

In June, New York adopted the ambitious Climate Leadership and Protection Act, which calls for reducing statewide greenhouse gas emissions to net-zero by 2050. The climate bill requires New York to get 70% of its energy from renewable sources like solar and wind by 2030 but does not set an interim goal for the transportation sector.

Members of the Sierra Club environmental organization will submit a petition with more than 7,000 signatures to the governor asking that he set an objective in his 2020 State of the State address to reduce transit-related emissions by 55% by 2035. Sierra Club activist Edgar Cid, of Lindenhurst, carried the petition and boarded a train with plans to head to Albany and hand it to the governor.

“We need to replace fossil fuels with renewable energy sources,” Charles Bevington, chairman of the club’s Long Island group, said during a news conference Monday at the Stony Brook Long Island Rail Road station. "This is a challenge, but we need to accept it."

A representative from Cuomo's office said the governor is taking action.

“New York has the lowest per capita transportation emissions of any state and we are taking aggressive action under our nation-leading climate plan to decarbonize the sector,” the representative said. “We will continue to work with municipal transit systems and all stakeholders on scaling electrification while the Climate Action Council develops its long-term scoping plan.”

“The solution to this issue is basically to electrify all of the other sectors and to move away from fossil fuels,” said Assemb. Steve Englebright (D-Setauket), a sponsor of the state climate act who attended Monday's news conference.

Robert Sinclair, media relations manager for AAA Northeast, said he thinks hybrid technology and fuel-efficient vehicles will make it possible to meet the transportation energy goal without the entire electrification of cars.

"We’ll have to switch to much smaller and lighter vehicles," he said. "The love affair of the SUV and the pickup truck is the main obstacle."

LIRR officials have estimated such an electrification project to cost $18 million per mile.

Englebright noted the LIRR’s plan to buy 12 new diesel locomotives, which was met with boos from the crowd. LIRR spokesman Aaron Donovan said the new locomotives will adhere to the most environmentally friendly standards and that public transportation, even when powered by diesel, is still greener than passenger cars.

"The LIRR shares the Sierra Club’s concern for the environment," Donovan said. “We recognize our service is one of the most significant ways that Long Islanders can lower their carbon footprint, and we strive to continuously improve our service delivery.”