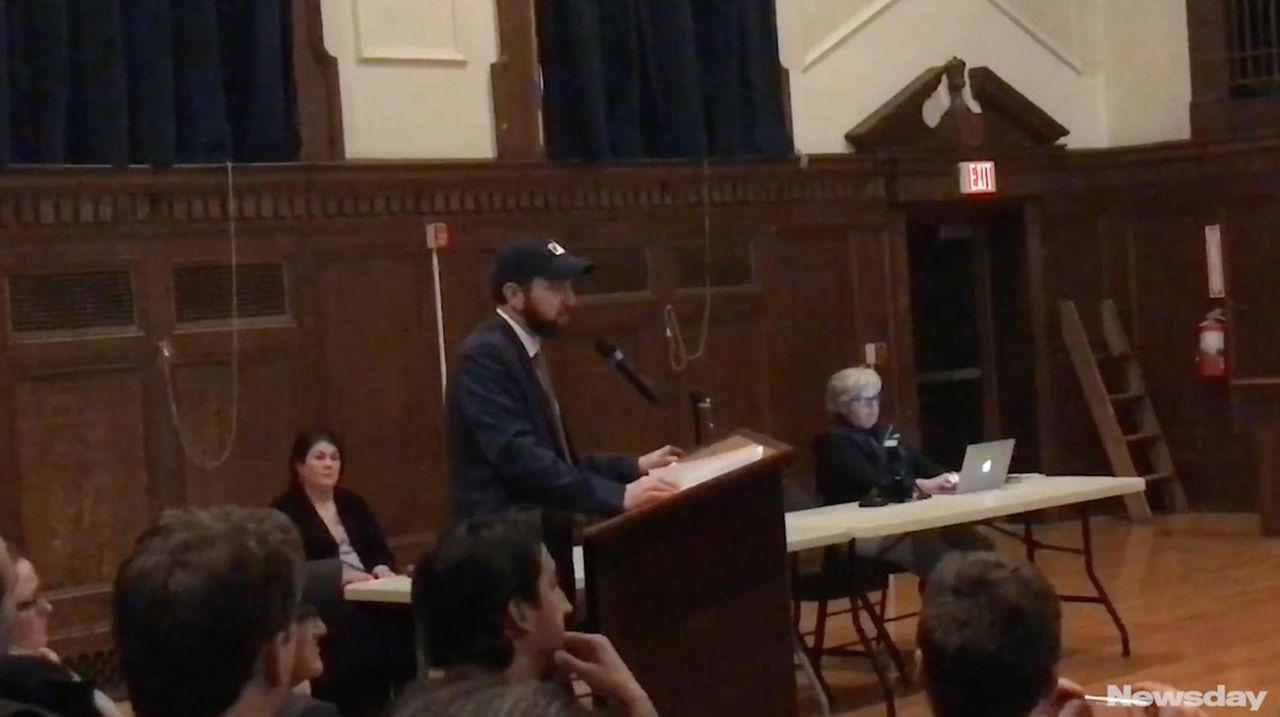 Stuart Bienenstock, director of business development for Calverton Aviation and Technology, fields questions from the Riverhead Town Board and community members about the company's ability to develop an aviation industry hub in Calverton. Though the Monday night meeting ran five hours, some questions remain unanswered. Credit: Vera Chinese

The backers of a $40 million Calverton land deal laid out a sprawling vision for an aviation industry hub during a marathon public hearing Monday before the Riverhead Town Board, though questions remain on the plan’s details and the developers’ ability to bring it to fruition.

More than 100 people attended the five-hour hearing at Pulaski Street School, a continuation of a four-hour public hearing held last month, to determine whether Calverton Aviation and Technology is “qualified and eligible” to develop 1,600 acres at the Enterprise Park at Calverton, or EPCAL. The proposal calls for building a 1 million-square-foot industrial campus and spending $1 million to improve two runways on the site.

Calverton Aviation and Technology submitted dozens of pages of evidence to the town, including letters of intent from businesses interested in leasing space at the site and qualifications from those involved in the project. Presenters on Monday included a representative from potential tenant Launcher, a startup researching rockets to propel satellites and currently operating at the Brooklyn Navy Yard, and the founder of a company that develops magnetic-levitation technology.

Calverton Aviation and Technology representatives touted their project as a way to bring the aerospace industry back to Riverhead, creating thousands of high-paying STEM jobs. The aerospace company Grumman Corp. left Long Island, including its large Calverton manufacturing plant, in 1994.

“We are not here to make money. We are here to help the people,” said Triple Five chairman Nader Ghermezian in a response that drew scoffs from the audience.

Representatives from Calverton Aviation and Technology downplayed the role Luminati founder Daniel Preston — whose past business dealings and finances have raised questions among residents and town board members — will play in the deal to purchase the EPCAL land from Riverhead Town. Town officials have yet to see the operating agreement between Triple 5 and Preston, though supervisor Laura Jens-Smith said they have asked several times.

Stuart Bienenstock, director of business development at Calverton Aviation and Technology, said the company “will do our best” to provide the document within the next few days.

Several community members, including two Luminati employees, took the podium to express their support for the project as a way to spur economic development and stem Long Island’s brain drain. Others continued to press for more information, like plans for the runways, one of which is controlled by Preston through a license agreement with the town.

Questions from the community and Jens-Smith over how Calverton Aviation and Technology could attract an anchor tenant and what regions it would compete with for leaseholders and STEM talent went largely unanswered.

“I would really like to jump on this bandwagon . . . overall I think this is a great idea,” said Larry Simms, of South Jamesport. “But details matter.”

The hearing will remain open for written comment until April 6, and the board will hold a vote at a later date.