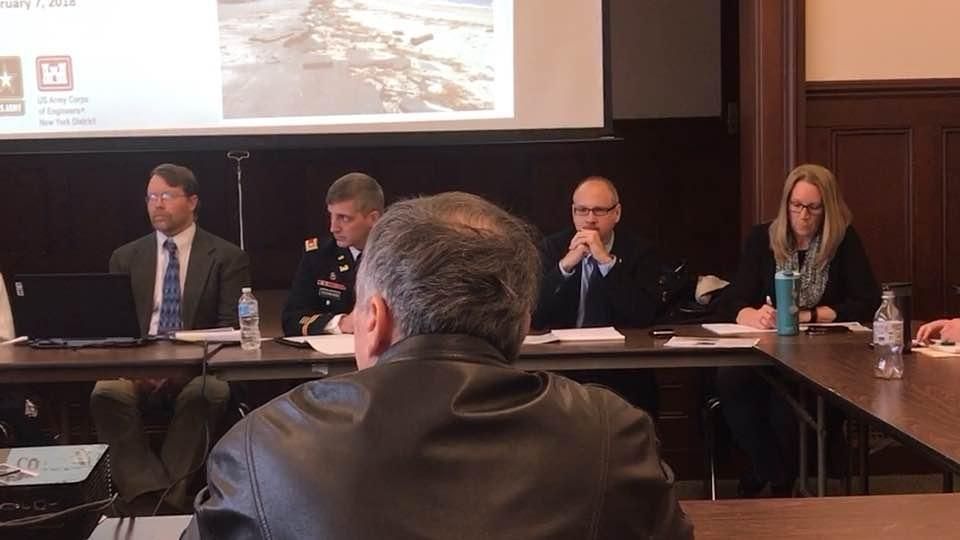 A $14.5 million plan to provide flooding and erosion relief along Hashamomuck Cove would be too costly for the town to sponsor, the Southold Town Board concluded, leading residents and town, county and federal officials to propose other funding ideas Wednesday.

Stephen Couch, deputy chief of the planning division of the U.S. Army Corps of Engineers, said the main purpose of the hearing was “to initiate some of the discussion on local sponsorship” of the project that would truck in 216,000 cubic yards of sand to build a 25-foot-wide berm to shore up the area over a year, then rebuilding it with 64,000 cubic yards of sand every five years.

Town Supervisor Scott Russell and other town board members reiterated their stance that the cost of having the town act as a local sponsor were too high, and they were wary of setting precedents for the town having to pay for upkeep to private properties.

The $14,560,000 project needs a local sponsor to pay a 10.5 percent share of the project — meaning local costs of $1,529,000 for the initial construction costs and $546,000 for the renourishment — according to the corps’ feasibility study. Southold officials calculated their local costs could be as high as $5,096,000 if the town acts as the local sponsor.

Residents and local officials at Wednesday’s hearing at the Peconic Community Center raised concerns about the costs, time frame, environmental impact and possible solutions for erosion plaguing properties owned by more than 70 people on a 1.5-mile stretch of County Road 48 facing the Long Island Sound.

Hirant Candan, who has property along the road, asked if the town had calculated how much money it would lose if homes in that area were ultimately lost from erosion. Kate Phelan, another property owner, suggested the county and the town could partner to act as a local sponsor.

Abdul Sada, a representative for Suffolk County Executive Steve Bellone, said after the meeting that the county was awaiting completion of the feasibility study before the county legislature and Bellone could make a decision on whether to act as the project’s local sponsor.

Another idea floated at the meeting was for property owners to tax themselves for the funds to become the sponsor. Russell said the town would hold meetings to discuss that option.

“If it’s going to keep my home from falling into the water, I’m willing to do that, even though I already pay extra taxes because I’m on the water,” Phelan said of the taxing district idea.