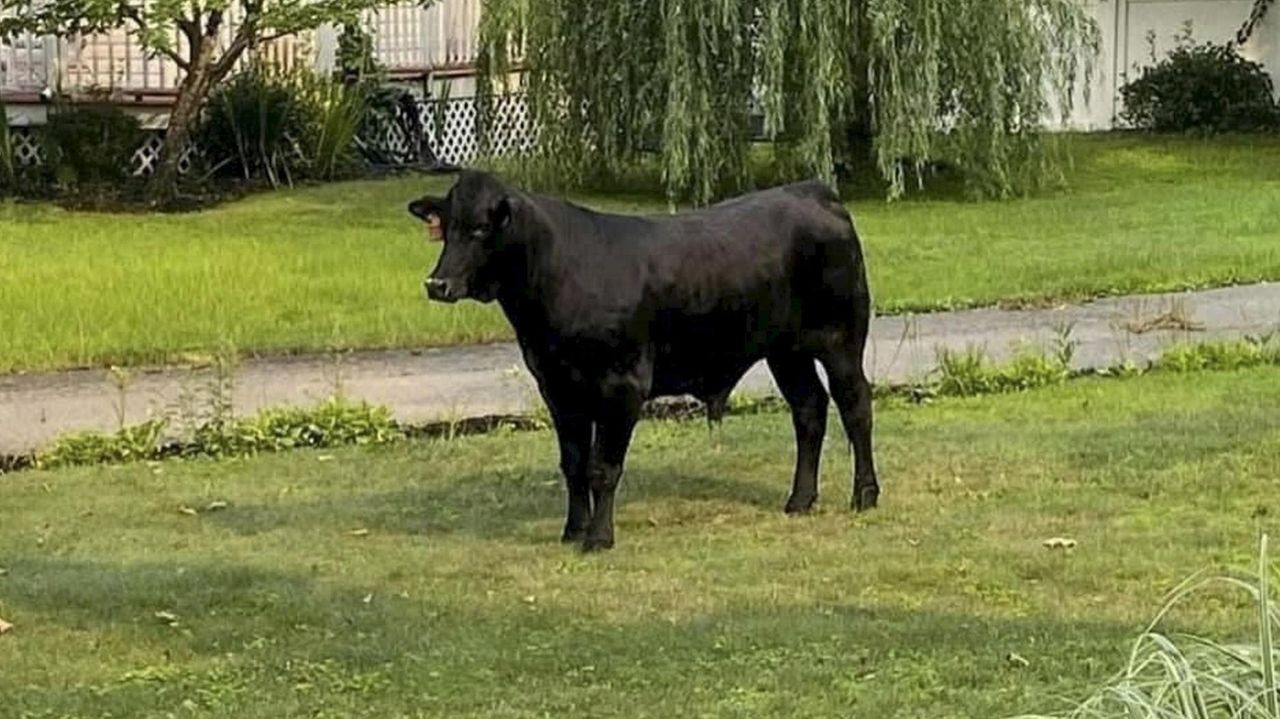 Animal rescue groups continued to search for an escaped bull in the Mastic area on Wednesday. The bull shocked residents as it passed through a neighborhood on Tuesday. One family caught it on camera. Newsday's Cecilia Dowd reports. Credit: Newsday staff, Marissa Quinones

Nearly 48 hours after a bull was reported to have escaped from Moriches farmland, the unsuccessful search for the 1,500-pound animal dragged on Thursday morning, according to Suffolk police.

On Wednesday evening, a cow in heat led by a woman on horseback was brought into the Mastic-Shirley woods in an attempt to lure the runaway bull, which broke free a day earlier before a planned slaughter.

"The bull has plenty of food and water out here, but maybe a [cow in heat] can entice him!" read a Facebook post from the group Long Island Orchestrating for Nature, or LION. A photo shows the woman and the horse, as well as a man in a "FREEDOM" shirt holding a rope attached to the cow, named Norma Jean, while walking through a meadow.

On Wednesday night, a helicopter — its high-powered searchlight beaming down — loudly buzzed above of a mix of woods and residential neighborhoods north of Sunrise Highway and east of Calabro Airport in Manor Park.

The first reports of the bull busting loose through a farm fence came in about 8:20 a.m. Tuesday, with the Suffolk County Police Department warning the public that it was "running loose in Mastic and Shirley."

The bull was last seen in a nature preserve on Tuesday night, according to an email from the Suffolk County police, which has turned over the search to several animal rescue groups. Police are still asking anyone who sees the escaped animal to call 911.

"He's big, he's young, he's fast," Floridia said of the bull. "He's also got a dark black coat, so he was hard to see at night in the shadows."

Not long after the bull ran off from the farmland, at 136 Barnes Rd., police closed a portion of Sunrise Highway as the search progressed. It was reopened after a short closure.

The bull, coat gleaming, was spotted in the front yard of a home on Montgomery Avenue and police released a photo. Social media users and others in the area also shared sightings of the bull — including video of the animal running down a residential street — and expressed hopes for its safety.

Floridia said the groups searching for the bull hope to bring the animal to a sanctuary.

"Once we get him, we'll get him to a sanctuary where he can live out his days," Floridia said. "That'd be the plan."

Officials: No overnight sightings of bull that escaped slaughterhouseSuffolk police said that a 1,500-pound bull still had not been found, a day after it broke free from a Manorville farm.