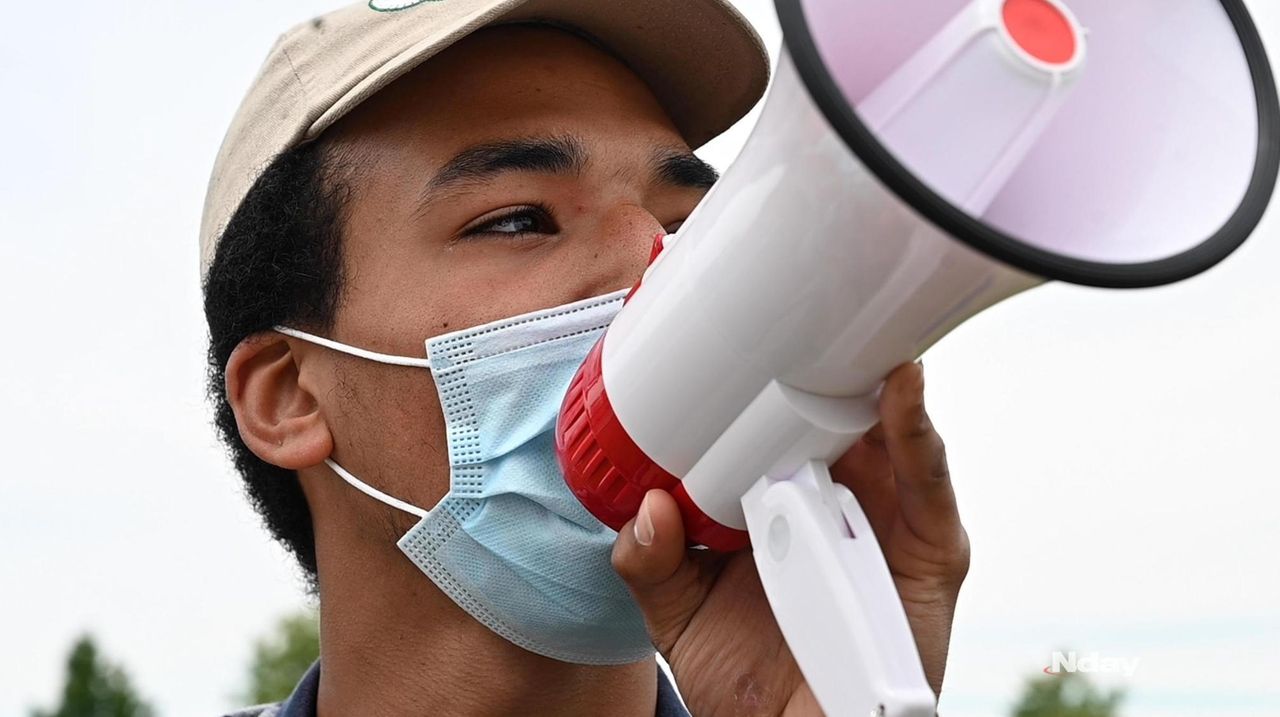 From the Shirley intersection where Ezekiel Torres holds his mostly one-man protest against police brutality and racial inequality, it’s hard to see which way the arc of the moral universe is bending.

Torres gets more shouted vulgarities than discussion. People tell him to get a job. One man gave him a Nazi salute. But he gets more appreciative honks than insults, so it is possible that drivers are moved by his “Know Justice Know Peace” sign or the case that he makes, via bullhorn, as they pass the Montauk Highway and William Floyd Parkway corner he shares with a sign for a youth sports league and a faded roadside memorial.

On a recent afternoon he demanded the arrest of the police officers who shot Breonna Taylor and a lifetime ban from police work for the officer who shot Tamir Rice — a man who, he said, in an amplified bellow, is “contributing to systemic racism and must never wear a police uniform again.”

Some drivers might remember Torres as a William Floyd High School linebacker or that school’s 2016 homecoming king, or know him by his Ice Cream Cottage hat as the young man who scooped their ice cream through his high school and college summers.

“I am not embarrassed to be out here,” he said, during a break. “There is a movement around race and justice in this country and this time we’re drawing a line in the sand. Are you willing to acknowledge and admit that there are institutional policies of racism employed specifically against black people?”

Torres competed on mock trial teams in high school and college and assembled his points in a roadside interview with a debater’s ease: redlining, unequal access to capital, the disproportionate incarceration rate and the Pentagon’s 1033 program, which supplies military equipment to local law enforcement agencies and is partly to blame, some say, for the militarization of policing.

To those who have said in these weeks since George Floyd’s death that racism is a matter of a few bad apples: “I would tell them you’re willfully ignoring it.”

The son of a black father and Puerto Rican mother — a career Marine and a telecommunications worker, respectively — his own experiences have been less hazardous than some, if not entirely benign. In the AP classes he took in high school there were rarely more than three students of color and in 12 years of schooling he had one black teacher. He will not forget the time when he was 18 and on a date in Port Jefferson. They ate dinner, visited a bookstore and were walking when a carload of white teens pulled up alongside and made monkey sounds at him before driving off. He sprinted after the car, then gave up. “I felt anger, then defeat.” The date was ruined. “I don’t want to be here anymore,” he told her. “I don’t want to be in this community after dark.”

Torres, 20, had planned to continue his near-daily protest for much of the summer, assuming that the COVID-forced indefinite delay of his internship with Rep. Adriano Espaillat’s (D-Manhattan) office meant he was out of a job. But he learned earlier this week that the internship was back on. He will work remotely at first and move to Washington, D.C., when the capital fully reopens; in the meantime, he will earn some cash stocking shelves at night for BJ's Wholesale Club.

Addressing motorists this week for what might have been the last time, he said: “God bless you all, drive safely and obey the traffic laws!”