This story was reported by Rachelle Blidner, Rachel Uda, Deon J. Hampton, Lisa Irizarry and Nicole Fuller. It was written by Fuller.

Two people were killed after their vintage single-engine plane crashed and burst into flames in woods near Francis S. Gabreski Airport in Westhampton Beach, while a third person onboard was rescued from the wreck by Army National Guardsmen Sunday morning, officials said.

The aircraft, identified by the Federal Aviation Administration as a Ryan Navion F, had taken off from Republic Airport in East Farmingdale before crashing about 11:40 a.m. into a wooded area just beyond Gabreski’s runway 33A, officials said.

The lone survivor of the crash was identified as Richard Rosenthal, the plane’s owner and a Kew Gardens, Queens, attorney, who was taken to Stony Brook University Hospital with non-life-threatening injuries, officials said.

Rosenthal was rescued by members of the Army National Guard, who were flying a UH-60 Black Hawk helicopter near the airport for a training exercise when the tower told them a small plane had gone down.

Chief Warrant Officer Joseph McCarthy, who was piloting the helicopter with six guardsmen inside, said when the airport tower didn’t get a response from the plane, it asked him to look for the craft.

He saw smoke coming from the tree line and the aircraft in flames. When he looked closer, he could see a person struggling to get out of the plane.

“When I flew over, you saw in his eyes he needed help,” said McCarthy, who had left Long Island MacArthur Airport for a training mission about 11:15 a.m.

McCarthy landed the helicopter nearby. Three pilot guardsmen, and one of two crew chiefs, who is also a New York City firefighter, ran toward the plane with handheld fire extinguishers.

The survivor was struggling to open the plane’s canopy — the entrance and exit — enough for him to get out. 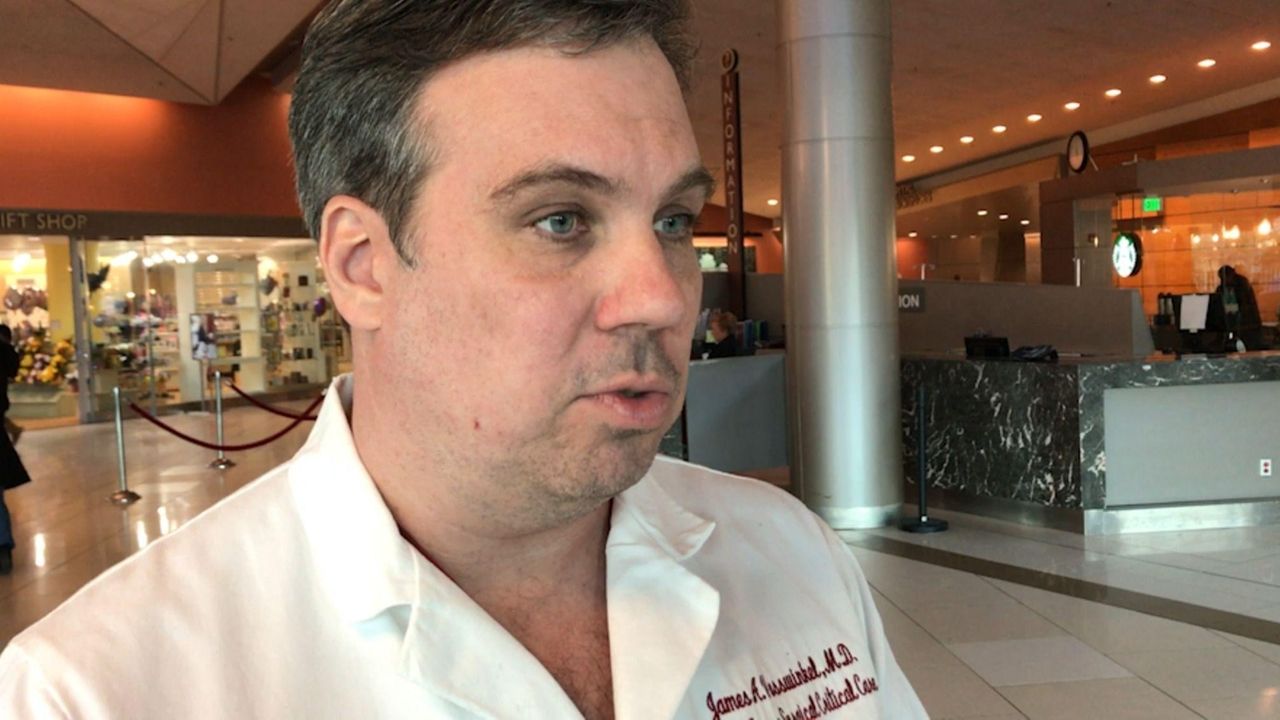 Standing on the wing tips, the pilots and crew chief kept the flames at bay long enough to help Rosenthal out.

He told them two others were inside, but the flames, fed by the plane’s fuel, kept them from saving the others.

Southampton Town Supervisor Jay Schneiderman said, “The other two occupants did not make it out of the burning wreck.”

The names of the two people who died in the crash were not released as of Sunday evening. Their relationship to Rosenthal was not immediately released.

The FAA said the pilot of the plane, a vintage propeller aircraft built in 1948 and previously used by the military, was practicing touch-and-go maneuvers when it went down.

“The plane had made contact with the tower at Gabreski and had clearance for a touch-and-go, meaning a practice landing and takeoff,” said incoming Southampton Town Police chief Steven Skrynecki. “The plane had touched down, and as it was ascending, the plane veered into a wooded area and crashed into the trees.”

The plane then burst into flames.

Rosenthal, a 61-year-old attorney, specializes in animal law at his Kew Gardens practice, said his wife, Robin Mittasch, who was at the hospital to see her husband Sunday.

“He’s in and out of consciousness,” she said.

Mittasch said she did not know who was flying the aircraft at the time of the crash nor the names of the other people on board.

The National Transportation Safety Board is investigating the cause of the crash, as it does with all civil aviation accidents.

It’s unclear what may have caused the crash and if weather was a factor. Around the time of the crash, conditions at Gabreski were described by the National Weather Service as partly cloudy and breezy, with the temperature around 40 degrees.

The airport sits on 1,451 acres in the Town of Southampton and is ringed by woods and located near residential neighborhoods. Three runways are in operation.

The plane crash Sunday was the first on Long Island since December, when a single-engine plane plunged into the Long Island Sound off Shoreham after apparent engine trouble. Two men were plucked from the frigid Sound and treated for injuries in that crash, the eighth on Long Island in 2016.

The crashes were the most in a single year in Nassau and Suffolk counties since 2012.

Nassau Hub project could start by March
2:15
For dad with new heart, the Father's Day gift is just being here
LIPA accelerating efforts to lower taxes on its power plants
1:10
Hempstead man arrested in May arrested again on drug charges
Warren defeats predecessor to win second mayoral term in Southampton Village
2:53
The lure of the big fish: LI craftsmen practice 'plug making'
Didn’t find what you were looking for?