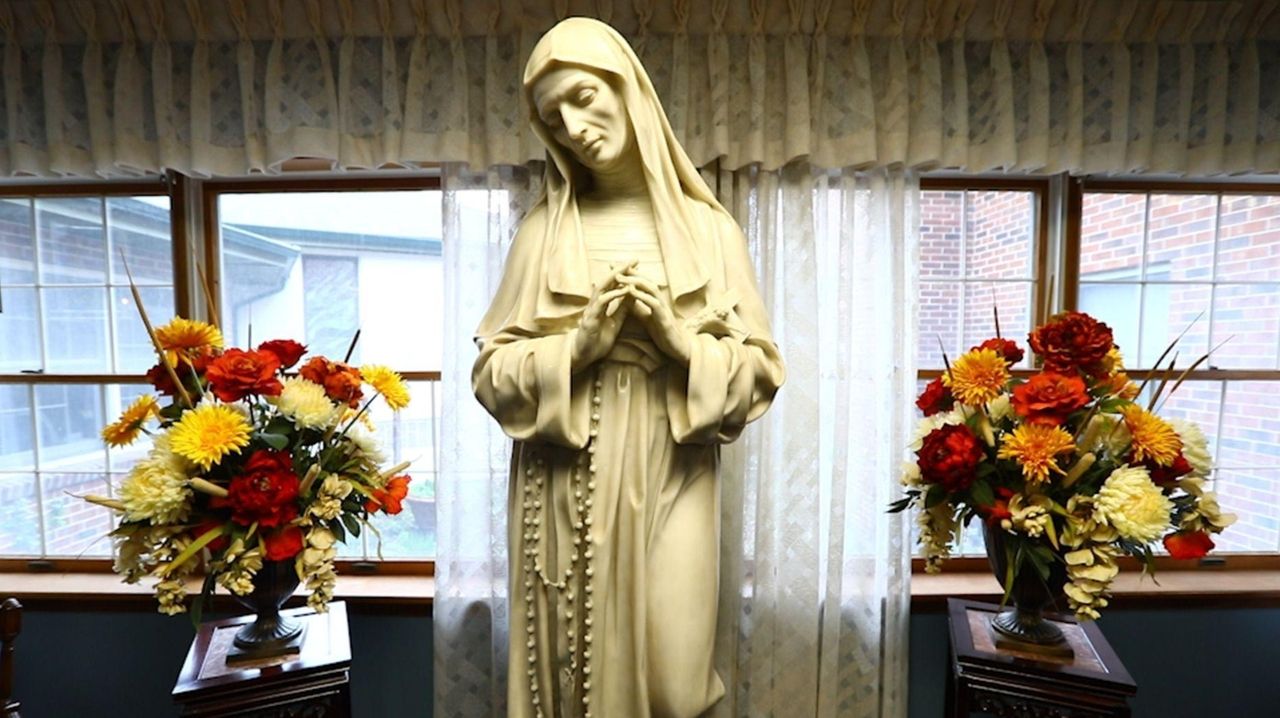 The Ursuline Sisters are selling their longtime United States headquarters in Blue Point, marking the end of an era as the number of nuns declines and the order contemplates its future. The sisters, who at their height in the 1960s numbered close to 100, are down to 40 members. Credit: Newsday / Jeffrey Basinger

The Ursuline Sisters are selling their longtime United States headquarters in Blue Point, marking the end of an era as the number of nuns declines and the order contemplates its future.

The sisters, based mainly on Long Island, numbered close to 100 at their height in the 1960s. Now they are down to 40 members, with most in their 70s and above. The oldest turns 101 in June.

One is the sister of former Yankees and Mets manager Joe Torre. Another was president of the faculty senate at Fordham University.

The nuns, whose base has been in the South Shore hamlet since 1935, say the 8.3-acre property must be sold to pay for rising living costs and health care as more sisters retire and move into nursing homes or assisted-living facilities. Plus, they say they no longer can afford the $900,000 a year it takes to run the St. Ursula Center.

The fate of the property is unclear, though some local residents hope to convert it into a public library.

The difficult decision comes as the international order, formally known as the Ursuline Sisters of Tildonk, kicks off yearlong events on Sunday leading to the 200th anniversary of its founding in Tildonk, Belgium, on April 30, 1818.

“We have to change, but we do it with great joy,” said Sister Joanne Callahan, head of the U.S. province of the order. “This is somehow where God is calling us right now in this moment of our lives.”

The sale of the center does not mean the order is shutting down soon in the United States, Callahan said. The youngest member is 46, and many of the nuns, although past typical retirement age, plan to keep working.

“It isn’t over for us,” said Callahan, who also served for 22 years as superintendent of the Catholic school system for the Diocese of Rockville Centre. “Yes, there is certainly a huge loss, but we still have a lot of work to do for the church.”

Still, she added, “Whether this province eventually dies out, that could be a possibility.” Elsewhere in the world, the order is growing: It has 800 sisters in India, now its largest concentration.

“We do have vocations,” Callahan said. “They don’t happen to be in the U.S.”

The center in Blue Point — a local landmark near Great South Bay, surrounded by majestic pine trees — has at various times served as a novitiate for the training of new sisters, a motherhouse, retreat center, and residence for sisters who live independently, as well as those who need health care.

In the last few months, the order has begun moving some of the sisters to nursing homes, while others are awaiting rooms in assisted-living facilities. Those who are able to live independently will move to apartments after the property is sold.

Last week, the order started laying off or reducing the hours of some of its 18 health care employees at the center.

The transition has not been easy, though the nuns are remaining strong, Callahan said.

Sister Mary Grace Hodnett, 85, who left the center last week for the Maria Regina nursing home run by the Sisters of St. Joseph of Brentwood, said she cannot bear to think of attending a farewell event after the facility is sold.

Sister Marguerite Torre, 87, sister of the baseball Hall of Famer, called the closing a “nightmare. It’s very difficult, there’s a lot of memories.” She spent three years at the center for her novitiate training when she first entered the order in 1951, and has come back regularly for meetings and other events.

For 27 years, she served as principal of the Nativity of the Blessed Virgin Mary School in Ozone Park, Queens, where she would have the students pray that the Yankees would win any time the team was in the World Series.

The first Ursuline order was founded in 1535 in Italy by Angela Merici, who gathered a group of 12 women dedicated to helping the poor, visiting the sick and instructing young women in family values.

Over the centuries, various branches of Ursulines formed around the world, including the Ursuline Sisters of Tildonk in Belgium. That order arrived in the United States in 1924 at Nativity of the Blessed Virgin Mary in Queens. Today it also operates in Belgium, India, Canada, the Democratic Republic of Congo and Guyana.

The order’s charism, or special gift, is “making God known and loved.”

After their arrival in Ozone Park, the Ursulines expanded to Howard Beach before realizing they needed more space for their growing numbers — especially a novitiate where new sisters could be trained.

The order bought a hotel on Middle Road in Blue Point in 1935, which served as its center and novitiate. That building underwent expansions over the years, but burned to the ground in 1980 in a case of arson. All 17 sisters escaped unharmed, and a local truck driver was charged in the fire. The new building opened in 1983.

Sisters in the order initially served mainly as teachers. After the Vatican II reforms of the 1960s, many moved into other areas, working in parish outreach, religious education, social justice issues and retreat houses.

Membership hit a peak in the mid-1960s. Then, as also occurred with other orders — including Long Island’s two largest, the Sisters of St. Dominic of Amityville and the Sisters of St. Joseph of Brentwood — a decline began in the later years of that decade.

According to Georgetown University’s Center for Applied Research in the Apostolate, the number of religious sisters in the United States has dropped from 179,954 in 1965 to 47,170 last year.

In recent years, the U.S. Conference of Catholic Bishops has created a National Religious Retirement Office to help the orders figure out how to pay for rising health care and living costs as many sisters retire and few new, younger sisters who could earn money enter.

Some merge with others, some decide to shut down, and others decide to sell properties to help pay the expenses — actions the Retirement Office helps them navigate.

A study conducted by a consulting company recommended by the Retirement Office and hired by the Ursulines determined they had little choice but to sell the Blue Point property, Callahan said.

She declined to provide the asking price, and it is unclear what will happen to the property, which is zoned for housing as well as religious and educational purposes.

Brookhaven Town Councilman Neil Foley is promoting the idea of renovating the 35,000-square-foot center to be the hamlet’s new library. That would be nearly triple the floor space of the current library on nearby Blue Point Avenue.

“The community would be ecstatic if we could pull this off,” Foley said.

Michael Firestone, director of the Blue Point Library, said he’s open to the idea, but sees it as a long shot because the process could take up to two years and residents would have to approve a bond.

If a benefactor came forward to buy the property and give it to the library, that would make the proposal much more feasible, he said.

Callahan said the nuns love the idea of the center becoming a library, but that she must be cognizant of the order’s financial needs.

“Not to sound mercenary, but for me, my responsibility is to get the best deal we can for the property, because we need to invest it wisely for the future of our province,” she said.

In the back of the property is a cemetery where 61 Ursuline nuns are buried. The plot would be carved out in the sale and preserved for the order.

Whatever the future of the St. Ursula Center and the land, it is clear the sisters are leaving. Callahan believes the full impact has not sunk in.

“Sometimes I’m not sure whether we even completely understand it, as we are going through the process of what the loss is going to be when it’s over,” she said. “Right now we are doing it and we know we have to do it and we are going step by step . . . But the day we really walk out the door and know it’s not ours anymore will be very difficult for us.”

“It’s one thing to do it logically and rationally,” she said. “It’s another thing when it’s your heart.”