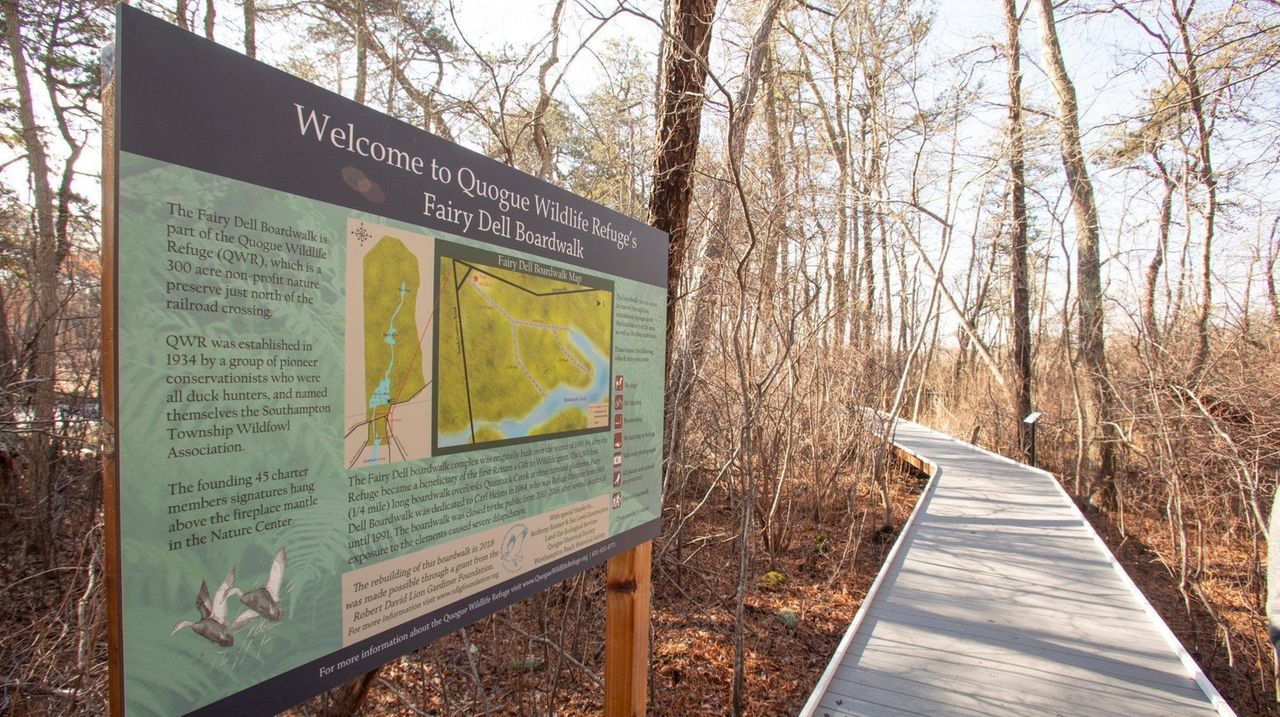 A recently renovated catwalk will once again allow visitors to traverse the tidal wetlands of Quogue’s Fairy Dell, named for its enchanting, historic setting.

The Fairy Dell is at the head of Quantuck Creek and within the Quogue Wildlife Refuge, a 305-acre expanse of preserved land and wildlife sanctuary that is open to the public year-round. The 1,500-foot elevated catwalk was rebuilt with the help of a $142,778 matching grant from the Robert David Lion Gardiner Foundation, which is based in Hampton Bays and promotes the study of New York history.

The dell offers access to a unique ecosystem, once used for ice harvesting and now where animals burrow in dead trees long ago killed by saltwater intrusion. The walkway, which terminates at the creek in three locations, is flanked by phragmites, or wetlands grass, and covered in parts by tupelo trees when in season. Lucky visitors can glimpse, or hear, wildlife such as nesting ospreys and woodpeckers during their hike.

“It’s a different kind of habitat from what’s on the mainland [of the wildlife refuge],” Quogue Wildlife assistant director Marisa Nelson said of the dell.

A dell is a small valley, usually among trees. The area was given the nickname “fairy” for its charming backdrop, which historians say was a prime spot in the 19th century for getting engaged, according to signage posted along the boardwalk. The Quogue and Westhampton Beach historical societies contributed research to the project.

“It always had a magical feel to it,” said the refuge’s director, Michael Nelson, who is married to Marisa Nelson.

The nonprofit wildlife refuge also contributed about $142,000 for the work, which was performed by Sea Level Construction Inc. of Westhampton and completed in February.

The original wooden boardwalk was built in 1983 and was already deteriorating when superstorm Sandy hit in October 2012 and destroyed it. It has been closed since. The new structure is made of a more durable composite material.

Marisa Nelson noted the new boardwalk is educational, but also offers visitors a chance to take in nature and unplug.

“It could get them off their screens and listening and looking around,” she said. “It’s healthy for all of us.”