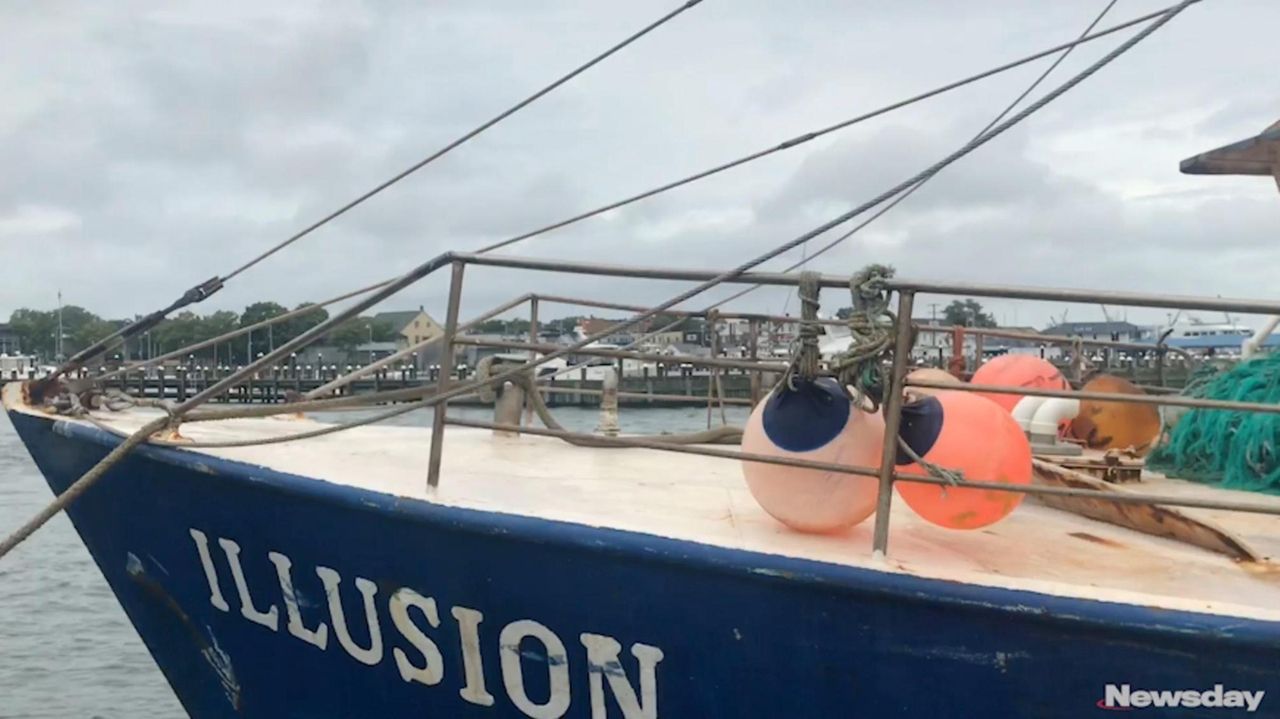 Mark and Mary Bess Phillips are among a dwindling number of commercial fishing families on Long Island. They discussed their experiences while their boat, Illusion, was docked at Greenport Harbor. Credit: Newsday / Janelle Griffith

Long Island's fishing families know how to adapt. They have to if they want to keep making their living from the water.

Many have succumbed to the sea of quotas and regulations. Fewer and fewer are hanging on.

In the past eight years, the number of commercial food fish licenses has dropped by double digits —11 percent — from 1,030 in 2018 to 916 so far this year, state data show.

On Montauk, commercial fishing is one-sixth of what it was in the 1980s, according to Bonnie Brady, who heads the Montauk-based Long Island Commercial Fishing Association. To understand the impact, the industry on the Island represents 99 percent of the seafood landed in New York.

Most of the families still in commercial fishing run mom-and-pop operations, Brady said.

“Some can go back 15 generations, some have been here since the '70s," she said.  "And some are just starting out.”

Mark Phillips is a third-generation fisherman. Now, son Nate and wife Mary Bess are his support team. Today, though, the Phillipses find themselves running a fish market in Greenport to augment Dad's offshore fishing trips.

The Osinskis went into the oystering business. Nearly two decades ago, techies Michael and Isabel pulled up stakes in Manhattan for the East End and farm life. These days, they’re developing shellfish instead of software.

And Julie and Raymond Lofstad of Hampton Bays are on the job 365 days a year. Gone are the weeks that brought in thousands of dollars, but still alive — and thriving — is their indomitable spirit.

The pull of the water

Sometimes family time simply means being on the boat.

Mark Phillips spends about 240 days a year on Illusion, fishing the waters not only around these parts but as far away as Massachusetts and North Carolina. Most trips take him from home at least a week, sometimes 10 days.

His wife and son, Mary Bess and Nate, are his lifeline. They take time from running the family's Alice’s Fish Market in Greenport to give Mark a hand when he's out of state. They help with the boat and whatever Mark is catching.  After the work is done, they all have dinner together.

“I probably see him more in Rhode Island, Massachusetts or Virginia, than I do on Long Island,” said Mary Bess, 63. “If Nathan and I want any family life, you just have to go where the boat goes.”

Mark, who grew up in Cutchogue, has been fishing more than 50 of his 61 years. He was 8 when he started working as a deckhand on his uncle's boat. Both his uncle and his dad were fishermen.

"I was pretty sure by the time I was 10 years old what I was going to do," Mark said. "I was either going to go fishing or be a marine biologist."

He went into fishing full time after he graduated from Mattituck High School.

His operation turned into a partnership venture when Mark and Mary Bess married in 1982. Then, Nate came along and he grew up in the business.

But Nate, 30, decided he wanted a different way of life. He headed off to study diesel technology at Ohio Technical College in Cleveland. Two years later, he was back working full time with his folks.

From software to shellfish

Isabel and Michael Osinski are raising more than oysters on their Greenport farm. They're raising a second generation of entrepreneurs — daughter Susanna, 19, and son Mercator, 18.

When the kids aren't in school, they're working with Mom and Dad. They've been key, their parents said, in developing techniques to grow oysters.

The Osinskis started Widow’s Hole Oyster Co. in 2002, deciding they would rather have seven-day workweeks on the East End than 12-hour days running a Wall Street software company.

They packed up their home in Gramercy Park and moved permanently into their summer place in Greenport. Their property includes five acres that extend into the harbor, which is where they raise the oysters.

Growing an oyster to market size takes the Osinskis about two years. And the demand is strong for their shellfish.

The couple credit their big harvests to an experimental growing technique called kusshi that Mercator customized for the farm. The technique uses the tides to sculpt the shellfish into a plump and petite shape, which appeals to oyster lovers.

Through the years, the Osinskis have seen the number of their competitors grow.

“More and more people have gotten into it, because they have the false assumption it’s easier,” Michael, 64, said of the hard work, especially harvesting.

Still, the oyster business is good — better than fishing, which is being replaced with aquaculture, he said.

“Fishermen have asked us for jobs,” Michael said. “It’s good that we have work to do. It’s sad to see the decline of commercial fishing.”

In for the long haul

When Julie Lofstad called her husband, Raymond, to tell him the baby was coming, he said: "OK. See you later."

She was in labor for 31 hours with daughter Olivia, now nearly 20. Raymond had plenty of time to make it from Charlie Hart’s Shipyard in Bayville, where he was repairing their first boat, The Razor's Edge, to the delivery room.

Julie understood. Her husband is a third-generation fisherman.

"When you're married to a fisherman or involved with a fisherman, it becomes your life," said Julie, 56, who is a Southampton Town councilwoman.

For years, the Hampton Bays couple relied on their catch to make ends meet. Early on, Raymond's trips would last three or four days. Now, he works with a cousin and trips last one day in the summer and three days in the winter.

"Back in the '70s and '80s, you could make a couple thousand dollars a week," said Raymond, 59, who became a fisherman after high school. "When I first started fishing, we used to go out and bring back hundreds of cartons of fluke."

The couple had to find new ways to survive in the commercial fishing industry. Today, they own Sea Breeze Fisheries and Better Bait Co.

Depending on the season, their catch can include squid, striped bass, fluke and whiting. They sell it at the Hampton Bays and Southampton farmers markets every weekend May through October, which can command a bigger return than offering it on consignment.

With boat loans to pay, Julie said, Ocean Fresh must go out each day. Working 365 days a year means family time is scarce. Vacations are almost unheard of.

"I can't see us ever giving up," Julie said. "We're going to keep on going until God sees fit to stop us."

Changes in federal and local regulations have created a challenging environment for commercial fishing on Long Island, families in the industry say.

Many fisheries are managed using state-by-state quotas, which limit the annual catch to specific percentages for each state. For fluke, for example, New York gets 7.6 percent of the commercial quota, compared with 27.4 percent for North Carolina and 21 percent for Virginia.

In addition, the commercial fishing licensing process is complex and often limiting, according to fishermen.

Together, the quotas and licensing are making it difficult for many fishermen to pay their expenses, including fuel, maintenance, crews and insurance, and make a profit, said Bonnie Brady of the Long Island Commercial Fishing Association.

“The families, some of them are still here, they’ve just had to give up fishing and are working other jobs,” Brady said

On Thursday, Gov. Andrew M. Cuomo directed the Department of Enviromental Conservation and state Attorney General Barbara Underwood to file new comments with U.S. Commerce Secretary Wilbur Ross over the state’s fluke quota, after filing a petition in March about the issue. Underwood said the state "will pursue all available legal options if the federal government does not address these inequities.”

“The biggest problem is they put moratoriums on the licenses,” he said. “You have to show a certain amount of money over the course of three years to get put into a lottery. Once you’re in the lottery, there’s no guarantee that you’re going to get a license.”

The DEC said it recognizes the licensing system needs an overhaul and has scheduled a series of meetings across Long Island — the first one is Monday — to gather fishermen's suggestions on how improve licensing.

"We need to do all we can to protect the families that depend on this important industry," said DEC Commissioner Basil Seggos.

Cuomo has directed the agency to launch a comprehensive analysis of the system that will recommend strategic improvements to make it more efficient, according to the DEC.

Here are the dates for the DEC's public information meetings on the commercial fishing industry: