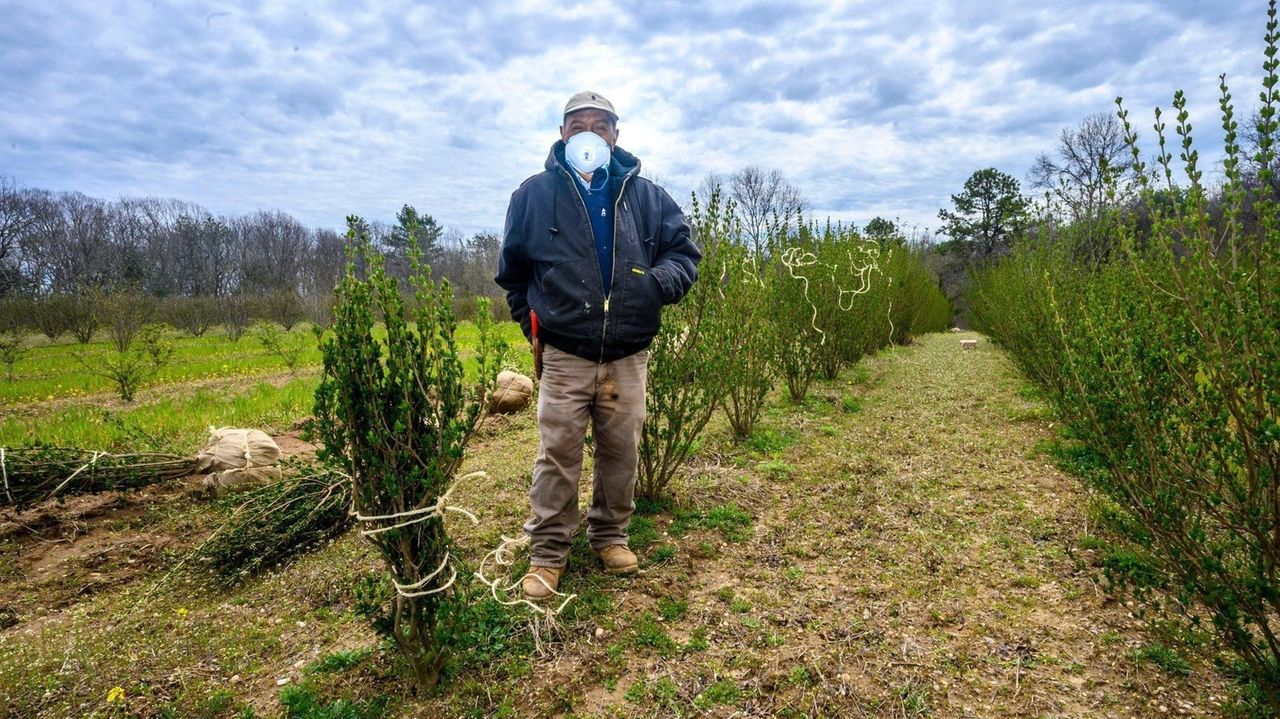 The Rev. Gerardo Romo, the bishop’s vicar for Hispanic ministry at the Episcopal Diocese of Long Island, said he has received calls from at least 20 East End farmworker families struggling with the decision to return to work and estimates there are more who are in need but are afraid to speak up. Credit: Newsday / Vera Chinese

Juan Antonio, a farmworker from Southold, took two weeks off from his job at a Riverhead nursery following the COVID-19 outbreak because of the risk the virus poses for someone his age.

Antonio, 68, returned last week, wearing a mask issued by his employer and doing his best to maintain a social distance from his co-workers.

“The fear is always there,” Antonio, a native of El Salvador, said in Spanish. “But if I don’t work, I won’t be able to keep up [with bills].”

Farms, like grocery stores and food pantries, are considered essential parts of the food supply chain, along with their employees. But immigrant rights advocates said not all farms are offering protection for workers, who often are Latino immigrants, as they face a choice between possible exposure or not having income to support their families.

Long Island has 592 farms, most of them in Suffolk County, that employ about 7,500 workers, according to a 2019 report from the state comptroller’s office and the Long Island Farm Bureau. One in five of the 55,000 people hired as farm labor statewide are migrants, according to the report.

Most Long Island farms are just beginning the food-growing season, and vineyards are about two weeks away from bud break, which marks the start of the 2020 vintage, growers said.

Across Long Island, Hispanic enclaves such as Brentwood and Central Islip have been some of the hardest hit by the virus, with 2,014 and 1,000 confirmed cases, respectively, as of Wednesday, according to Suffolk County data. Local leaders have said the high caseloads are driven by factors including difficulty engaging in social distancing because of household sizes, and relatively high levels of residents who are working, thus risking exposure, either because they have been deemed essential employees or have comparatively low income levels and cannot get by without work.

Angel Reyes Rivas, Long Island regional coordinator for the statewide advocacy group Rural & Migrant Ministry, said the organization has set up a GoFundMe page to, in part, pay for masks for immigrant workers.

“We are focusing on masks so we can help workers protect themselves,” Rivas said. “We have some workers who are not receiving any type of masks.”

The Rev.  Gerardo Romo, the bishop’s vicar for Hispanic ministry at the Episcopal Diocese of Long Island, said he has received calls from at least 20 East End farmworker families struggling with the decision to return to work and estimates there are more who are in need but are afraid to speak up.

The Rev. Romo said safety training is sometimes inefficient and informal and may not be in farmworkers’ native language. He also said sick migrant workers who do not have health insurance may avoid seeking medical treatment. He noted that farmworkers often were underprotected from pesticides and other chemicals before COVID-19.

“They are putting the food on our tables and they are not protected against COVID-19,” the Rev. Romo said. “They work shoulder to shoulder picking up the vegetables, and they don’t have any protection. They transport from one field to another crowded on a small vehicle.”

Long Island Farm Bureau executive director Rob Carpenter noted that many farming sectors are being challenged, especially the greenhouse industry, which does most of its selling in the spring. He said all farms he has spoken to have taken extra precautions, and he is not aware of any outbreaks at any operations.

The state Department of Agriculture and Markets directed farms to continue practicing social distancing, proper hand washing and to sanitize their facilities.

“I really think the farm community is doing their absolute best to comply,” Carpenter said. “The last thing farmers want is to get somebody infected or to have a whole crew be out for two to three weeks.”

Satur Farms in Cutchogue, which grows and packages greens sold at supermarkets, is offering masks to workers, encouraging hand washing and is no longer letting delivery people or other nonemployees in its processing facility. Workers, who include many Spanish speakers, have been educated on proper procedures in their language, said farm co-founder Paulette Satur.

“We have many measures implemented that makes our place safer,” she said.

Chris Baiz, owner of The Old Field Vineyards in Southold, said he usually only has two to three workers at a time in the field and that wide vineyard rows allow them to social distance. They are typically not wearing masks in the field and wore pruning gloves as they finished up winter field work, he added.

“I want to make sure these people are OK, and if they need help I will get them to a medical facility,” Baiz said. “I take great concern at their well-being.”

Another reason some farm hands plan to return to work rather than quarantine at home is because there is little hope they will benefit from the economic stimulus package.

“We pray for medical workers, but we never remember the farmworkers,” the Rev. Romo said. “We just think everything appears in the markets by magic.”