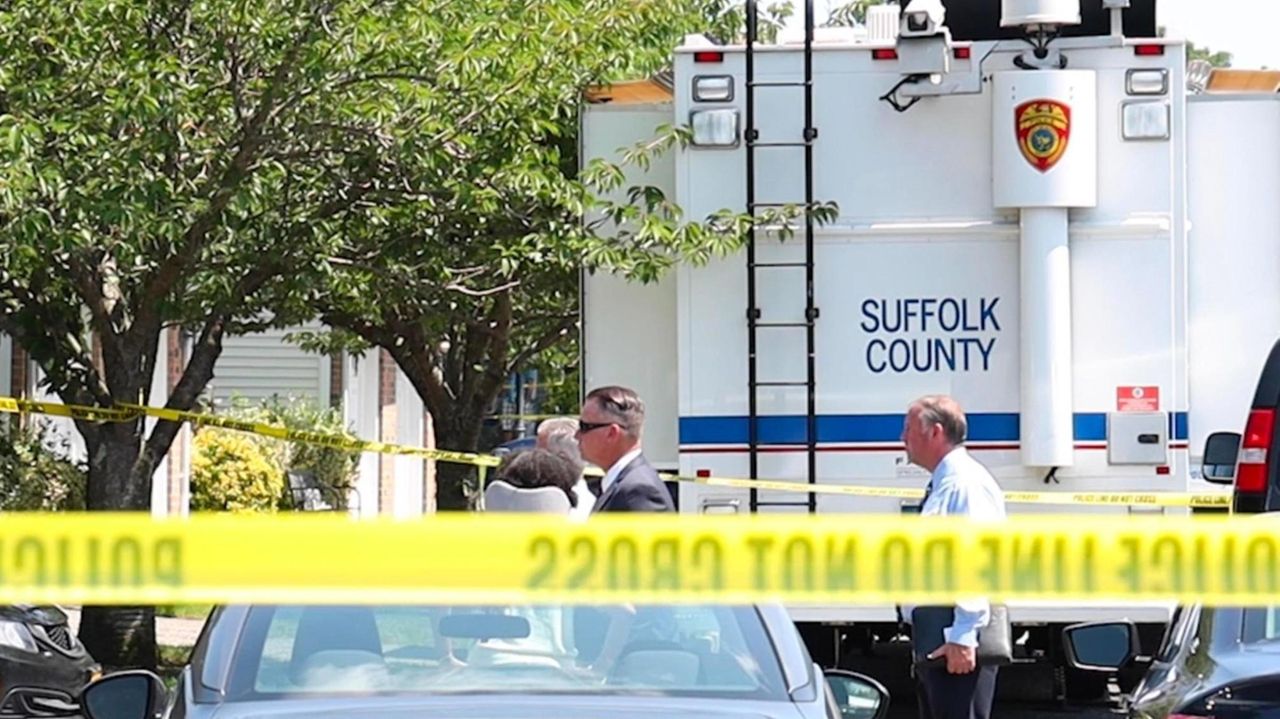 Suffolk County police said they believe the killing of three people, whose bodies were found Friday in a Farmingville apartment, was a targeted shooting and not a random home invasion attack.

Police continued to search for suspects Saturday and did not reveal a motive in the slayings.

Homicide detectives said they were looking into the backgrounds of Richard Castano, 31, his fiancee, Diamond Schick, 24, who both lived in the home, and Nyasia Knox, 20, of Georgia, who was staying with them. They were all found about noon Friday in the upstairs apartment on Overlook Drive in the Fairfield Hills South community of Farmingville.

"While this is still an active investigation, detectives are investigating this as a targeted incident," police said in a statement Saturday.

Castano, whom friends called "Polo," and Schick were planning to get married and had a 6-month-old son. Baby registries still online listed gifts for the delivery that was expected at the end of last January.

Family members said the baby was not in the home when the shootings occurred.

Knox was visiting her friends on Long Island and staying with her 9-month-old daughter in the apartment, said her aunt, Luz Falconi. That baby was found unharmed by police in a back bedroom and taken to the hospital for observation but is now staying with family members.

Falconi said she didn't know Castano or Schick, and that Knox’s parents were flying to New York on Saturday. She said Knox was preparing to go back to school to start her life.

"It’s tragic. She was only 20 years old," Falconi said. "Her parents are heartbroken and devastated they lost their daughter. She has little brothers and sisters and now a baby is not going to know her mother."

Police would not comment Saturday if they were investigating the killings related to Castano’s prior conviction on drug charges.

Castano was released from prison in September 2019 after serving a 3-year sentence related to a heroin trafficking ring. He pleaded guilty in 2016 to felony conspiracy and criminal possession of a controlled substance, according to court records.

The conviction stems from charges while prosecutors said he was acting as an assistant to the leader of a ring that moved tens of thousands of fentanyl-laced heroin doses in the Shirley area, leading to 17 overdoses in 2015. Castano’s charges were tied to renting vehicles for the operation, prosecutors said at the time.

Family members and a defense attorney in the case did not return calls for comment.

Schick’s friends described her as a strong woman who rubbed off on others. Her godmother, Jazzy Holland, urged families and young people to stop violence in the community.

"She was our baby. She was everything to us. And I cannot believe this has happened," Holland said. "Whoever did this, you are a coward and God have mercy on your soul for what you’ve done. You took three lives for no apparent reason."

The Farmingville town home complex was tranquil Saturday morning, and there were few reminders of the horrors that unfolded in the quiet complex a day earlier.

A receipt for baby formula lay in the grass outside the couple's home. A piece of police tape dangled from a tree out front. Their storm door appeared to be dusted for fingerprints. The door covered a broken doorjamb; police were not sure if it had been damaged during the attack.

Police also were looking for surveillance footage of the complex, including from a camera that adorned the front of the brick and white-sided townhome.

Neighbors said they heard banging at 3 a.m. Friday but didn’t realize what had happened until they saw police outside. A neighbor said they last saw Castano coming home around 2 a.m.

Police said they had received complaints of noise coming from the apartment in recent months, and neighbors said there were suspicious vehicles frequently coming and going from outside the home.

Another neighbor, Tricia Batjer, 52, who lives across the street, said she would frequently see cars idling and people standing outside.

""Farmingville is a normal kind of community; nothing like this ever happens here. I feel heartbroken, I don’t care what happened, no one deserves to die. It’s horrible and heartbreaking for the baby. It doesn’t belong in a neighborhood like this," Batjer said.

"We pick our neighborhoods when we move. I love Farmingville and I did not think it was dangerous. … I know I’m not a target. I didn’t go to bed worried."